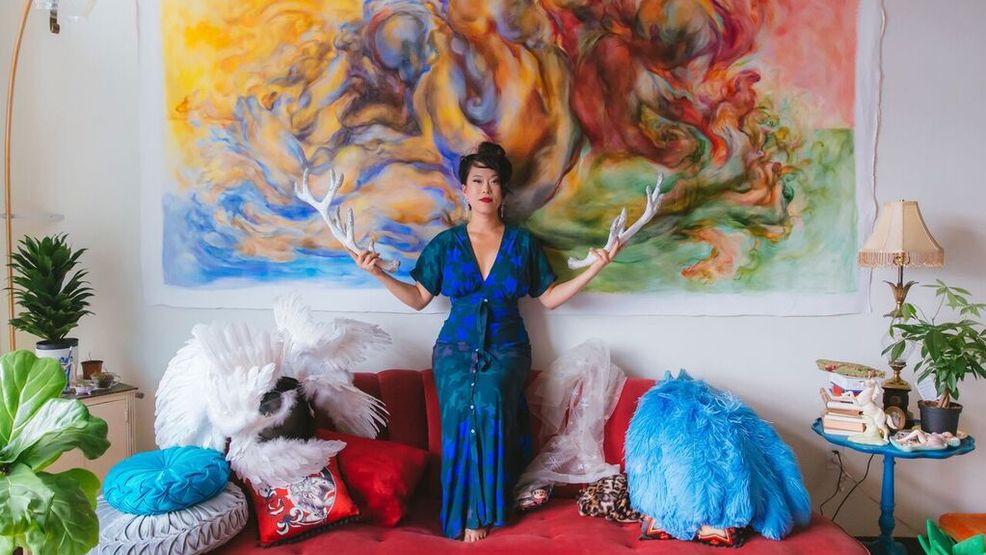 Spreadsheet fanatic by day, stage sensation by night. Meet Jenny Ku, a local events producer, artistic director, and artist that has built quite a name for herself within the burlesque world. Performing as The Shanghai Pearl, Ku has not only graced countless local stages but become a respected curator of those stages as well.

“Ever since I was little, I remember drawing and making up things,” says Ku, originally from Taipei, Taiwan. “I think that I’ve always had a really hyperactive imagination.” Parlaying that creativity into adulthood, Ku has dabbled in everything from painting to performance, and still finds ways to balance it all.

“Creativity, imagination, and art have been through lines in my life,” says Ku. “I see the importance of storytelling and shared human experiences. It’s like the air. Creativity, storytelling, sharing. We all have stories, and we all have the right to express them and share them.”

Those stories manifest themselves in her work as allegorical performances, in ways Ku herself seems surprised at. “I always had interest in burlesque,” she says. “I would go watch the shows and I thought they were so fun. But then I also started to notice the racial inequity in it. Why were only white girls doing it?”

Digging further into the discipline, Ku started to take classes, and it was “during those classes,” she says, “that I was really like, ‘whoa, this is a thing that I love, and want to do.’”

“It was and is women or non-binary led,” she says, “and because it is still considered a bit fringe by mainstream culture, there is so much room for experimentation and space for discovery, which is so lovely.” And she’s all about shaking things up. “There’s really room for edginess and to push boundaries. Not that everyone takes those opportunities, but there is opportunity there.”

As Ku began performing, she says, “There was an evolution that happened that was not purposeful, that was kind of like, ‘Okay, I'll try this. Oh, I'll do that,’ Doing burlesque and cabaret was the first time I was able to kind of make a slim living with my art.”

She and her friends would put on shows, she says, instead of, “waiting for permission or waiting to be cast.” And that’s where her penchant for organization came in. A self-proclaimed expert at spreadsheets, and clipboards, and taking care of people, Ku says, “it came from a very DIY place.”

“Being good at it just comes from having basically worked since I was 11 years old. Whether it's was catering, or cooking, or being the performer, or booking the performer, I've done almost every job.” And her personal experience has had an impact as well.

“As an immigrant, and as a woman of color,” says Ku, “I've had to go through life with the lens of learning how to navigate so many different groups. Those techniques for survival translate well in this industry, and probably most industries.”

While freelancing to support her own artistic endeavors, Ku took a position coordinating events for a local government organization, one that puts her at the intersection social justice, racial equity, and of course—art. “I happen to be good at this logistics and coordination role. And I actually enjoy it, bringing order to chaos,” says Ku.

Making connections is a running theme for Ku, who uses performance art to do just that. “I used to teach burlesque,” she says, “and I would always tell my students, ‘You tell your story. No one's getting paid enough to not have a good time. You should be doing what you want.’ It's about the story you want to tell, what is fun for you, what feels good and right for you. The choice and agency in that is really powerful.”

In crowded venues, Ku brings to life characters that cross multi-disciplinary boundaries. Not only is she using her own movement but creating costumes and bringing to life a memory or moment that can then be translated into shared experience.

“I might have a story in my mind,” she says, “but I hope I’m presenting it in a way that someone can just kind of tap into it, with their own experience. I think it’s really special to have stage time and a room full of people go with you somewhere, and experience something with you.”

“When people have a really emotional response, that's the thing. And it's not just applause. I have a few acts that make some people cry. It's not that I try to make them cry, but if that is what has come up for them, that’s really something. It’s a little bit like you're the conduit. You're reminding them of something they forgot or something they’ve put away or has been hidden from them. There’s something alchemical at work and it’s a bit magical.”

Her imagery-based stories also manifest some painstakingly created costumes that help bring them to life. She points us toward handmade antlers and various other headdresses. “I don’t make every single thing,” she says, “but I do make a lot of my own costumes. I usually design it all and work with a lot of really incredible people that help me engineer and realize it. And I love that. The trust and collaboration feel really special.”

Asked which costume she would choose as a favorite, Ku hesitates before committing. “Right now, I think it’s my star gown,” she says, draping its diaphanous sheer fabric over a chair, it’s glittering sequined stars catching the evening light. “I might have cried a little bit at the first fitting. It’s just so pretty and dreamy.”

She goes so far as to say, “I think that must be how people feel when they put on a wedding dress!” And while Ku’s interests generally veer toward fables and mythology, shaking up reality, “my star gown is really classical, beautiful, and I feel so beautiful in it, and it looks exactly as I imagined it.”

For those hesitant to take the leap into an art form often perceived as risqué? Says Ku, “I think if someone is super uncomfortable, that's an opportunity for inquiry. Seattle has a pretty awesome burlesque and cabaret scene, and I do think some people get the impression that, ‘Oh, it's just strippers,’ but there are lots of different types of burlesque and cabaret that you can see.”

In fact, Ku now also curates a weekly show at The Pink Door. “It’s Seattle’s longest running burlesque and cabaret show,” she says, “and was one of my own first gigs over a decade ago. It’s really interesting to now be curating it and advocating for the artists and putting my own spin on it.”

Whether performing or producing, one thing is clear. Ku is a steadfast creator attuned to the community, her story, and helping others find theirs.