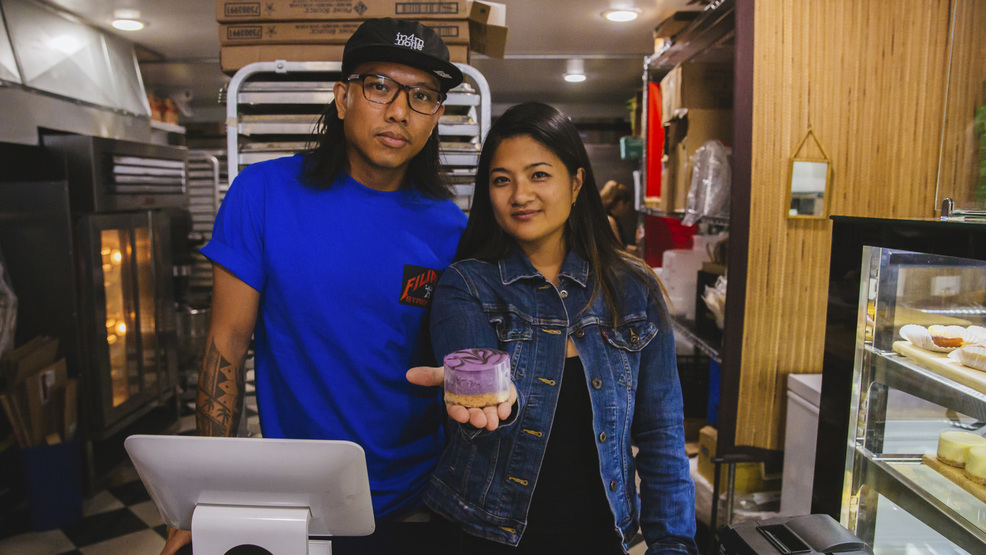 As the wall of their pint-sized bakery declares, Hood Famous Bakeshop might be small - but they’ve got a big heart (Image: Sunita Martini / Seattle Refined).
SEE MORE

As the wall of their pint-sized bakery declares, Hood Famous Bakeshop might be small - but they’ve got a big heart.

When we sat down with co-founder and head baker, Chera Amlag and her husband Geo Quibuyen - aka Prometheus Brown of Seattle hip hop duo Blue Scholars - we found just that. And so much more.

“It doesn’t seem that long ago that we were doing it all,” says Amlag, of a time when she and Quibuyen were all-hands-on-deck to get this dream of a bakery off the ground.

Recalling the early days she spent refining her product and wholesaling out of a commissary kitchen, Amlag cringes, “I was still working full-time, and I just remember vividly this one night, I was in our shared kitchen at two, three in the morning, and a whole speed rack of cheesecakes fell over. I actually have a picture of it still to remind me.”

The incident was just one of many learning experiences that led to the couple opening shop from a tiny storefront and kitchen in Ballard, where you can now pick up treats-to-go including the “original” ube cheesecake, cookies, marshmallows, and Amlag’s fresh takes on traditional Filipino treats.

“I have a personal golden rule,” says Amlag. “I don’t like to ask somebody to do something if I haven’t done it myself.” And now she actually has others to ask, with a handful of staff helping out. “It feels like it went fast, though,” she says, “and I appreciate what we have because of how hard it was.”

Born in the Philippines, Amlag grew up in Bremerton, where she connected with fellow dreamer Quibuyen. Now the parents of two - one who’s already offered to take over the baking, while the other will stick to the business side - the duo have quite the back story.

“From the time we met,” says Quibuyen, “to the way we were brought up and the home cooking backgrounds that we come from. There’s so many starting points that informed the final product.”

Those starting points include the infamous ube, a purple-hued yam common to Filipino desserts. “I always thought of ube as something that you put on something else, but Chera would just eat it,” says Quibuyen.

“I had it a lot when I was young, in the Philippines,” she says, “I used to cook it into this dessert called halaya, which is a soft caramel, kind of. Similar to a caramel, you have to keep stirring and stirring, so my mom would put all the ingredients in there, put me on a chair, and then give me a wooden spoon, and it was my job to stir it for like thirty minutes.”

“My family never had junk food in our pantry, and so if I wanted a cookie, I had to make it,” says Amlag. “I was our in-house little baker.” But it wasn’t until well down the road that the little baker would return to that calling in a big way.

As the foodie industry and social media began to shine a light on international flavors and independent food mashups, the duo took note. “We would have these conversations,” says Quibuyen, “Like ‘Yo, this is the type of stuff we’ve been talking about for a long time.’ And they were ideas that we would do at home just for fun.”

The creative juices flowing, they took their love of home cooking, community potlucks, and experimentation to the masses with a series of pop-up dinners they coined, “Food & Sh*t.”

And one of those ideas was ube cheesecake.

“The Ube cheesecake sat on the shelf for a while,” says Quibuyen, “It was gross, I'll put it out there.” But after some research and home experimentation, Amlag landed on a recipe that stuck.

“I actually set out to make a really good New York style cheesecake. Like, plain. I think that took a while, then I started incorporating ube, and that had its own timeline, a different iteration. And then, when we started wholesaling at Uwajimaya, it would literally be going to the commercial kitchen, and then I just took a picture of every single one, like, burnt, ugly. I didn't get professionally trained, so, so much of it was trial and error, figuring out how to scale something before you dump in a 30-pound block of cream cheese.”

While Amlag’s eventual ube success might have helped spark a wave of trendy purple treats, Filipino flavors in general are now having a full-on moment, and she and Quibuyen aren’t mad about it. “It’s been on the radar a lot,” he says, “ it was just a matter of time.”

And it’s easy to see that Quibuyen has spent time thinking about why. “Part of it is generational,” he says, “and it's not specific to the Filipino community, but any immigrant community where there's a second generation getting their foot in the door and allowing the influences to just all melt together. I think most of all, Filipino food, for whatever reason, has been underrated and underappreciated, so it was just a matter of time.”

Well beyond celebrating the flavors they grew up with, Amlag and Quibuyen are bringing their background in community organizing to the table. “What’s really cool is that food is so political yet so accessible at the same time,” says Amlag, “and I think that’s why it’s so powerful. Everyone has to eat, right?”

“We’re not a political organization,” she says, “but what we’re doing already at the shop is using food as a platform or lens to educate, by introducing people to our culture, our food. The interaction that we have when people come in and don't even know where the Philippines is.”

From thinking about the people who harvest ingredients and making sure that their staff is well taken care of to supporting those in the industry already educating about farming and local sustainability, the duo makes an effort to bring their values to every decision they make.

“And on a personal level,” says Quibuyen, “we definitely want to push the issue of health and awareness, and I know that might be a contradiction to some people to see health, wellness, and dessert. But it’s all about balance. I mean, it would be great for our bottom line if everybody ate our stuff every day, but you have to have these things in moderation,” he says.

Amlag laughs. “He’s actually not a dessert guy! But when he actually liked the ube cheesecake, I was like, ‘we might be onto something.’ And since then, these two dreamers have continued to marry good quality ingredients with good values. So far, that philosophy has meant good business.

“I'm surprised,” says Amlag, “I think people really have been amazingly supportive at our growth and the changes that we've made, because we really didn't know what we were doing in the beginning. I didn't know what I was doing, I was really just trying to figure it all out. But I don’t know how we could have done it any other way.”

And by the taste of it, we wouldn’t want them to.

Up next for this little bakery-that-could will be more collaborations, one of their favorite creative endeavors. “It’s a lot more fun,” says Amlag. “The city is embracing and valuing collaboration. So much more magic happens when you create with like-minded people. I think that’s where you can get the most innovative ideas and experiences.”

“And we actually just came from Capitol Hill,” she says, “because next month we are doing a collaboration featuring our calamansi cheesecake. So that’s really exciting!”

You can bet we’ll be the first in line.