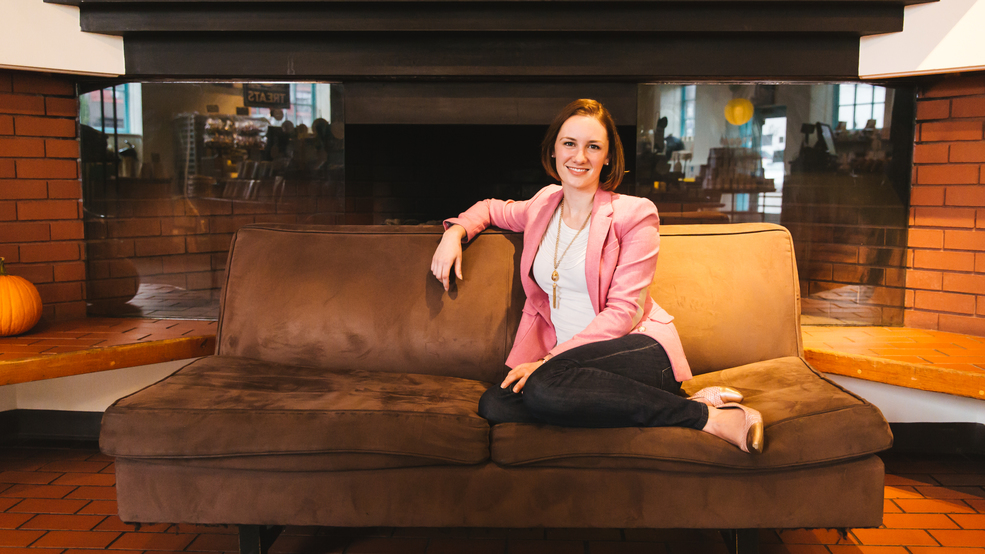 Emily Benson is in charge of social impact and communications at Theo Chocolate in Seattle. (Image: Seattle Refined)
SEE MORE

Movers & Shakers: Emily Benson of Theo Chocolate has a sweet tooth AND a big heart

Fall is officially here and with Halloween just around the corner, we’ll admit we’ve got a bit of a sweet tooth. But it’s not the bite-sized big brands we’re after. We’re suckers for something a little closer to home - and a little more unique - and Emily Benson, in charge of social impact and communications at Theo Chocolate has just the ticket.

Pick any day of the week to wander by Theo’s Fremont factory and offices and there’s a good chance you’ll be drawn in by the unmistakable scent of freshly-made chocolate wafting through the neighborhood. Benson jokes about the initial weight gain when she began working as Theo’s supply chain impact manager, “I didn’t realize how much chocolate I was eating.” Pity the double-edged sword of product development.

But it wasn’t always chocolate and roses for Benson, who took a roundabout road to this latest love. Originally from Canada, Benson has lived everywhere from rural Illinois to the Netherlands and Latin America. She graduated high school at 17 and college at 20 - but she didn’t stop there; following it with law school, where she says her guiding star was "just a desire to give voice to people who didn’t have it.”

Benson worked as a lawyer, did a stint at an international criminal court in the Netherlands where she helped represent children who were soldiers in Congo, and took a clerkship with a federal judge in St. Louis all before landing a position with the Howard Buffet Foundation. There, she was tasked with working in developing countries, initially Latin America.

“I worked mostly on food security programs like agriculture, including cocoa and coffee,” she said. "Which is how I met Joe Whinney, the founder of Theo Chocolate.”

It turns out that chocolate wasn’t that far of a stretch for Benson, in more ways than one.

“I was recently talking to my grandmother,” she said. “Who mentioned that my great-grandmother lived on the Italian-Swiss border and worked in a chocolate factory.”

Things have now come full circle, and 18 months into her work at Theo, Benson is tasked with telling the entire story.

“We’re bean to bar, so that includes farmers in Congo, employees here at Theo and our own environmental footprint, and it includes our consumers.” With her incredible depth of field experience and understanding of international relations, Benson is up to the task and her passion shines through.

Whether it’s visiting Theo’s farming partners in Peru and the Democratic Republic of Congo (DRC) or holding a “No Waste November” competition in Theo’s offices, the 30-year-old is helping transform a broken chocolate industry one story at a time.

“Being in a communications role brings me back to what my goal was when I started out at 16,” she explained. “Wanting to give voice.”

“I get to tell these stories for farmers who may never have an audience here in the US. I get to be that bridge for them, which is very rewarding,” says Benson. And for the rest of us, that’s more reason than just the enticingly unique flavor combinations - think root beer and quinoa and turmeric - to be interested in what’s happening beyond Theo’s factory walls.

“When I think of what makes Theo unique,” says Benson, “it’s that we’re not a chocolate company that does our business this way and then over here, we have corporate social responsibility or this program on the side. It's really informing every single decision we make when we're making it.”

Benson helps the brand look at the entire supply chain, from ensuring farmers have forward contracts in a commodity market that’s rooted in colonialism to helping them access health care and other basic life resources. She speaks just as passionately about meeting women in Congo, who are forced to plan their families around disease and war, as she does about sustainability and Theo’s fully organic factory where they’re currently working to become zero-waste.

“If a product is too inexpensive, most likely one of those suppliers in that supply chain is being taken advantage of. If the product is too expensive, then perhaps you are being taken advantage of. But there's a true cost right in the middle where everybody wins and that has been our goal the entire time,” says Benson. “To make delicious, quality chocolate that's accessible to everybody. There's a right way to do business. This is how much it costs.”

But it’s not all business for Benson, who spends time volunteering at Pasado’s Safe Haven in Monroe in her free time. “They're an animal rescue and they're also very active against animal cruelty. They have farm animals, which I love. I love dogs and cats. I have two of each. I love big animals. There, I work with llamas on the farm side. It's super fun.”

“I'm also involved with the the Snohomish County Human Rights Commission,” said Benson, who it seems, might never sleep. “I sit on the commission and provide counsel to the Snohomish County government on their policies and practices and how they could affect human rights but then also really advocating for that within Snohomish County. You have Edmonds where I live, which is more urban but you also get very, very rural. It's a broad diversity of perspectives in Snohomish County, which makes it really interesting.”

We tried to get Benson to commit to a favorite Theo flavor, you know, in case you needed an insider recommendation, but no such luck. She did, however, let us know that for their new Clusters line, a healthier take on chocolatey snacks, you can expect new fall flavors like apple crisp and the yet-to-be-released peanut butter and jelly! Just another tasty story from a woman with plenty up her sleeve.