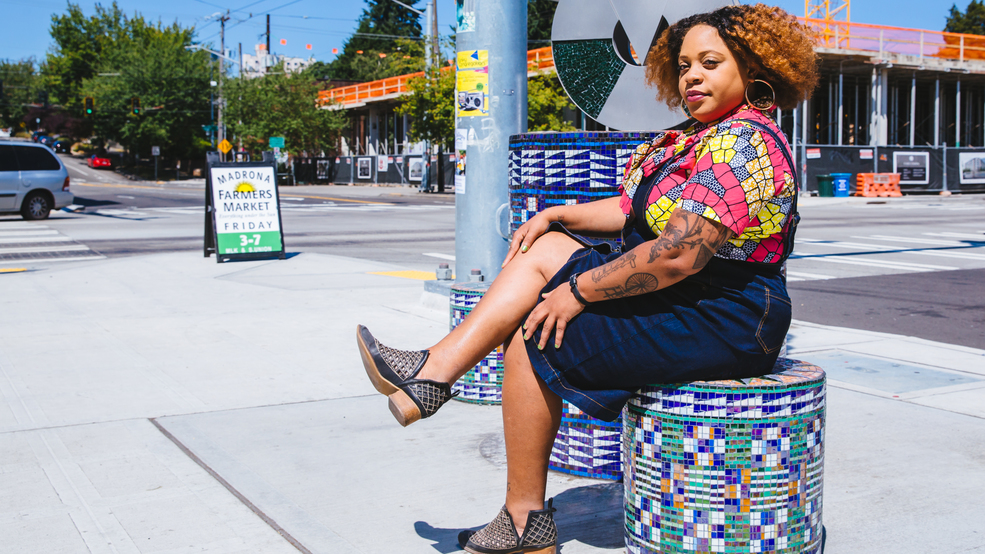 It’s long been acknowledged that entré into the art world can be hard, whether you’re an emerging artist or a curious collector. Elisheba “Liz” Johnson wants to change all that. A trained visual artist in her own right, and an experienced creative entrepreneur, Johnson is a project manager for the Public Art Program at Seattle’s&nbsp;Office of Arts and Culture&nbsp;where she’s working hard to create and maintain a creative community with a focus on equality and access. (Image: Sunita Martini / Seattle Refined)
SEE MORE

Movers & Shakers: Elisheba Johnson wants everyone to have access to art

It’s long been acknowledged that entré into the art world can be hard, whether you’re an emerging artist or a curious collector. Elisheba “Liz” Johnson wants to change all that. A trained visual artist in her own right, and an experienced creative entrepreneur, Johnson is a project manager for the Public Art Program at Seattle’s Office of Arts and Culture where she’s working hard to create and maintain a creative community with a focus on equality and access.

With a fresh BFA from Cornish College of the Arts under her belt, Johnson opened Faire Gallery Café. The Capitol Hill space wasn’t just about patrons viewing art in a static environment, but rather an art community where music, poetry, and experimentation were welcome.

“I’m really passionate about art collecting,” says Johnson. “We did really fun stuff and I tried to get people to buy their first artwork there. The idea was that I really wanted everybody to have access to the arts.”

While she closed the gallery after six adventurous years, Johnson certainly hasn’t lost an ounce of her passion. Now, she channels her skills into public art. For the past four years she’s worked on everything from strategic initiatives to public arts access and grants programs, where she says managing a project from beginning to end "is really interesting.” She lights up discussing the initiatives she gets to be a part of - like funding from the 1% For Art Ordinance, i.e. 1 percent of all capital improvement funds goes to funding public art projects.

The latest in a long list of endeavors that keep Johnson excited is Borderlands, on view now through October 29 at King Street Station. Their public art staff was tasked with thinking about belonging and resistance, so they invited artist Pedro Lasch to come in. Lasch has a body of work called Abstract Nationalism that's comprised of different anthems that people sing at the same time, and flags that are four different countries fused together alphabetically.

“It’s all about different nations’ relationships to each other and how we think about borders and nationalism. And we thought that would be an interesting kind of work for local artists to react to,” says Johnson, who professes the rich conversations between the artists were one of her favorite parts of the project. “They had a series of three different conversations with him on the phone where they were just all talking about ideas and it was really interesting, to hear all these brilliant minds in the room.” The show includes immersive installations by Anida Yoeu Ali & Studio Revolt, Ryan Feddersen, Satpreet Kahlon, Pedro Lasch, Henry Luke, Ries Niemi, Crystal Schenk, Carina A. del Rosario, and Inye Wokoma.

Johnson humbly claims not to have a life outside of work.

"To be fair to myself, what I love to do is go look at art - which is also my job," she corrects herself. "So it feels connected.”

She’s also a founding member of COLLECT, a social and cultural event that encourages new potential art investors to get started on their own collections.

“Art buying has always felt inaccessible to a lot of people, but also the art world is changing so artists are selling less work, galleries are closing, and I think the field has to reimagine itself.” COLLECT was started with some friends, where they get a bunch of people on a party bus, give them champagne and take people around on curated tours!

The group sees different galleries and studios where they meet owners and artists alike. It turns out even friends who she thought knew the art world found it to be intimidating.

“I was shocked,” says Johnson, “so we started gearing it towards those people. If you don’t know the language and the habits of a community, in this case the art world, it’s hard to feel like you can just walk in and talk to people and have any idea what you’re talking about.”

What they do is not only open the door- but walk through it with you, in the hopes of stripping away the intimidation factor and providing unique opportunities to discover emerging and mid-career artists who produce high quality work at manageable price points.

“Art walk is really a party and there are so many people out and I know that could be intimidating for folks but I think in a lot of ways the critical mass is gonna make it feel a little bit more welcoming.” For those who aren’t sure what they’re into just yet, Johnson says, “There's so much to do. Sometimes people have bands or poetry readings, so even if that artwork doesn't speak to you there might be a poet who's reading that speaks to you.”

So how does she manage the day-to-day? Johnson keeps her friends and family close, including her five-year-old son Emery. “I'm just meeting really incredible people everywhere I go and I feel like I'm open to really awesome people. Look on Facebook. I know people hate Facebook but I love Facebook. And I go through every weekend like, ‘oh what's going on, okay I'll go hit that up, I'll go do that.’ There’s so many cool people here doing really cool things.”

Trying to preserve a rich culture of creativity in a city of constant change is a big task. Sometimes you just have to be willing to look for it. Whether curating a life for her son, championing emerging artists and performers, or getting you to purchase your first piece of art, Johnson’s welcoming presence may be just what the sometimes stodgy art world needs more of.