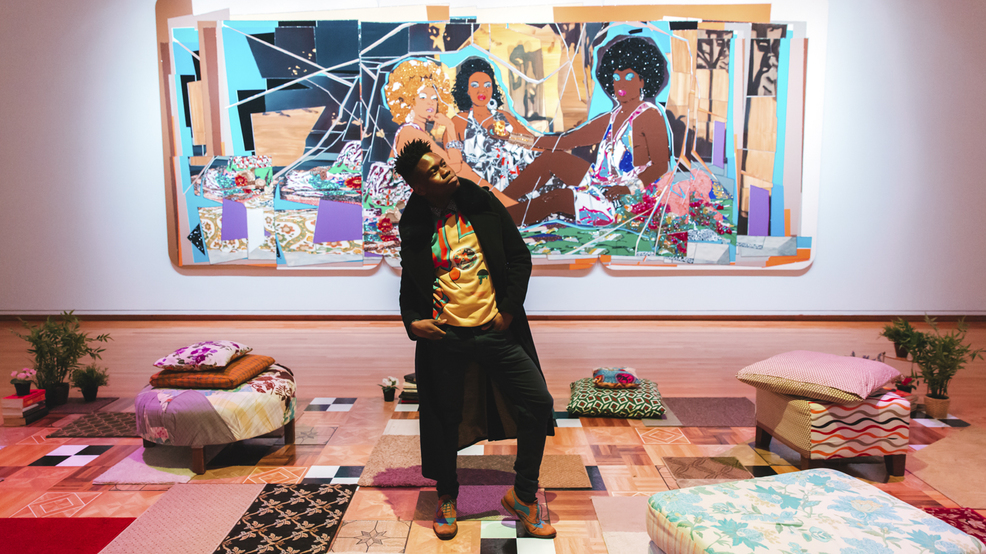 Three weeks into his internship at Seattle Art Museum, David Rue was asked to stay on full-time. And while that says a lot about the talent and professionalism he brings to his role as the Public Program Coordinator, it is Rue’s creativity and passion that says even more. We had the chance to sit with Rue in the museum’s current special exhibition, Figuring History, to chat about how he went from Minnesota musical theater to Seattle creative with a community streak.

Originally born in Liberia, Rue spent his childhood in a suburb of Minneapolis before a stint in 42nd Street opened his eyes to the wonders of dance.

“I started doing competition dance after school,” he says. “Then when I went to the University of Minnesota, I got a Bachelor in Individualized Studies, and that combined journalism, dance, and English. Because I was like, ‘I know that I love the arts, but I also know that I love writing, and I love academia, and I don't know what this is going to turn into, but I want to tailor my academic experience to what I want to do and what I like.'"

This tactic of interdisciplinary pursuits seems to have become a theme of Rue’s life. “I graduated, became a dancer, moved to Seattle for grad school, and now here I am - because I applied for a job that I was not qualified for.”

But sometimes the best things happen by chance, and Rue is proof of that.

As part of Seattle University’s MFA program, Rue applied for a job at SAM’s exhibitions department. But in the process of being interviewed, he was offered an alternative in the museum’s first emerging arts leader internship, which “is designed to kind of present opportunities for underrepresented people in the museum field,” says Rue, “Or people that don’t have traditional museum backgrounds.”

Now, with MFA in hand, Rue is tasked with organizing all the institution’s public adult programs - everything from tours and academic lectures to tea ceremonies and jazz performances. But he also has a hand in the museum’s larger-scale programs like SAM Remix and Legendary Children, both deeply rooted in partnerships and community engagement.

Removing the silos of cultural institutions and actively engaging the community has been a noticeable drive for SAM as of late, and Rue is all for it.

“Because I’m a dancer,” he says, “I’m oftentimes tasked with creating in-gallery performances.” These performances activate static museum galleries in unconventional, creative ways. For instance, Rue will contact a dancer, give them a theme, and see what they come up with.

“What we're doing is simply providing the space and amplifying what's already happening in the city because there's such brilliant dancers and performers here, and what I love to do is simply put a magnifying lens on what they do.”

“Having a dancer in front of a projection helps the projection artist learn about dance, and it helps the dancer learn about projection art, and to put those things together and see how it vibrates” He seems less interested in the resulting work as a work itself than he is in the process and what people get out of it.

“What the public gets to talk about is super exciting to me because I love hearing good and bad. I love when we make programs that are polarizing, and people are like, ‘Ah, what was that?’ And some people are like, ‘That was everything.’”

The idea of cross-pollination fostering social conversation intrigues Rue, and keeps him motivated. “It’s really exciting,” he says, “and I think that it's where the sector is going in terms of what audiences have now come to expect, and programmers are challenged to rise to the occasion, and that's really exciting for me. Being able to intersect the visual arts with the performing arts is always what makes me the most excited.”

While his dancer’s perspective gives Rue a leading edge in the museum world, his passions go far beyond it. “I have this kind of fantasy of myself being a renaissance man,” he says, “that can exist on stage as a performing artist, but then also walk off the stage and understand what a contract looks like, and how to write a contract, and how to create opportunity for other people.”

Currently involved in a handful of creative processes around town, Rue’s schedule is anything but 9-to-5. And next month you can see him in Dani Tirrell’s Black Bois, at On The Boards.

“It’s a project that is unlike any other that I've ever been a part of,” says Rue, “I couldn't say no because, A, working with Dani is an absolute dream, but then to also be part of a work that celebrates the multiple ways that blackness can exist, that gender identity can exist, and then to mix in the visual arts, the performing arts, live music, all into one space, has been just an absolute dream come true. It's also been really generative for me as a human being because it's such a healing, motivating, inspiring space.”

Fascinated with the idea, Rue wonders aloud, “how can all these worlds intersect at the same time without taking off one hat and putting on another. What if I just have a really dynamic hat that matches my shoes?” Those would be some pretty dynamic shoes, too, for Rue’s style sense is apparent and he seems unafraid to show it off.

“I was one of those weird kids that, growing up, would come home and watch Dior runway shows. I've always had a deep interest in fashion because I love the ability that clothes have, to communicate messages about who you are, what you're about, what you like, what you don't like.”

He rattles off a list of influences from photographers like Malick Sidibé and Seydou Keïta, who he says “captured the beauty of West Africa in nuanced, amazing ways,” to K-pop videos and the internet in general. “Sometimes I get dressed,” he laughs, “and I'm like, ‘Can I wear this to work?’ So then I do and I hope that it's okay.”

Thankfully the museum is full of other stylish cohorts, and Rue quickly learned that they don’t play games when it comes to fashion. “I remember once I wore sneakers, and they were like, ‘Are you sick? Is everything okay?’ It was like no, I was in a rush.” But chalk it up to just one more creative discipline for Rue to add to his list.

How does he manage it all? “I always joke and say it’s lots of coffee and coconut oil,” says Rue, “because you should always be moisturized. But it’s so embedded in my professional and artistic practice. I think that you just do it. And if it happens, it happens, and if you do the work and you're diligent, and you make genuine connections with the right people, it just kind of all falls into place pretty organically. I'm super happy that it did. I'm just so grateful that these opportunities have come my way.”

But he’s also not one to dwell. “I'm always like what's next, how do I continue the conversation, and how can I give it back, because I'm lucky. Like I'm super, super lucky.” When asked if he has any advice for others interested in arts leadership, he pauses a moment before responding. “I would say be honest and be up front about what is possible and what isn’t possible.” But he quickly circles back to the big picture, noting that “you should always root the work that you do in community partnership.”

"Don’t approach it superficially and bring in one-off people to achieve some arbitrary goal that you can just check off your list,” warns Rue, who is deeply interested in equity work, “Do it in a way that cultivates artistic excellence, but also breeds community building so that we can interact as human beings if I see you on the street.”

When it comes down to it, Rue admits that “if your heart is in the right place, if you put in the work, and have the diligence to be the best at your craft, and people can see that, they’ll want to help you. When I do my job better, people get to interact with the arts better, so that demands that I rise to the occasion because there's a lot of other people's work on my shoulders that I don't want to disappoint.”

And for those of us who just want to be a part of the conversation? “It’s really important just to go experience artistic experiences that you might not like,” says Rue. “Go to things that you think you might hate, and see experimental work that's outside of your comfort zone. Because then, again, you're able to talk about what you didn't like about it, and through that conversation you can say, well, maybe that's just me thinking about it in a different way, and maybe I need to approach my lens from a different perspective.”