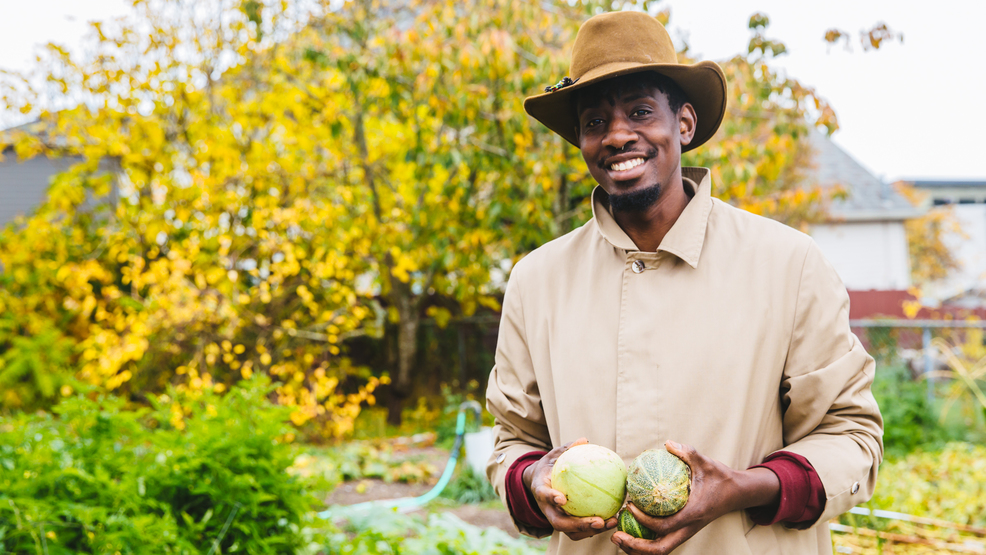 Sure, you may have caught him rubbing elbows with Anthony Bourdain on ABC’s “The Taste” a few years ago, but for Abdullah, it’s not all about becoming the next best chef. Beyond that you’ll find Chef T is also a DJ, a businessman, an educator, a craftsman, and at the heart of it all, just a guy trying to build a community. (Image: Sunita Martini / Seattle Refined)
SEE MORE

He might be allergic to melons, yet Tarik Abdullah is pulling them fresh out of the earth and rattling off a laundry list of preparations he wants to try. We’re at Nurturing Roots, a little community farm owned by his friend Nyema Clark. Tucked behind a church along Beacon Avenue South, the gated land is ripe with end-of-season fare, a few lingering tomatoes peeking through overgrown greens.

As we wander the little plot, Chef T - as he’s known to many - goes on about his endless passion for food and everything that revolves around it. Sure, you may have caught him rubbing elbows with Anthony Bourdain on ABC’s “The Taste” a few years ago, but for Abdullah, it’s not all about becoming the next best chef. Beyond that you’ll find Chef T is also a DJ, a businessman, an educator, a craftsman, and at the heart of it all, just a guy trying to build a community.

Growing up between Kent, North Seattle, and the Central District, Abdullah’s family always had land, he says, “So the yard meant growing food, and my parents always cooked. All of our parents’ friends cooked. Most of my friends were from the Middle East, Mediterranean, Pakistan, southeast Asia, so food at the house was always changing.”

“There was never an attraction to the idea of making it an occupation,” says Abdullah, who just happened to always be around food. As a youth, he worked at a friend’s family’s spice shop. “And sure enough, what am I now? The Spice Man. So, it's full circle. It's hilarious.” Abdullah’s easygoing nature and giant smile are instantly charming as he extolls the virtues of cooking with spices - both healthful and flavorful - but only under duress does he commit to naming favorites, like Ras el Hanout, often found in his Middle Eastern and Mediterranean-influenced dishes.

Peeling back the layers of Abdullah’s DJ and a Cook brand you’ll find Midnight Mecca, the upscale pop-up event for which he partners with DJs, live dancers, and creative mixologists to host multi-course dinners around town. For December, the theme is “Ottoman Empire,” and Chef Tarik is preparing a menu fit for royalty, expertly paired with craft cocktails and beverages by Damon Bomar of Brown Liquor Co. (That Brown Girl Cooks!). On top of that, there’s Abdullah’s junior culinary program, In the Kitchen with Chef T, and even T Leatherworks, a line of leather bike accessories.

His latest venture? Black and Tan Hall, a performing arts and restaurant space along Rainier Avenue, in Hillman City, where Abdullah and founding partners Rodney Herold and Benjamin Hunter are creating, as he says, “Something that has meaning, with the ability to plant roots in an ever-changing, fast-growing city.”

Finding the available space, the three sat down and said, “Okay, what can we come up with that will really benefit the neighborhood?” says Abdullah. So they developed a new model of a for-profit community co-op, where investor partners are the workers, and everyone has a voice. No banks. No loans.

“We wanted to center it around what a neighborhood should have,” he says, “Congregation, a place to eat, a place to go even when you’ve gotta shed a tear.” Along the way, Abdullah and his partners are learning plenty about the world of business. “Right now we’re dealing with permitting and building the structure. For me, it’s just not cooking as much,” he ponders, “Which is strange.”

Once the physical space is up and running, they plan to use it as a restaurant and rental space, and to host their own events, cooking classes, and catering program. “It’s basically everything I love doing,” says Chef T. “It’s just really food, working with kids and doing community work.” Some of that work is engaging new members of the community. “We have a very mixed neighborhood, so we need to figure out a way to create a bridge between all of us, and I feel like teaching kids is definitely helping out.”

His ultimate goal is to create a culinary program for youth ages four to seventeen. “I’m planning on working on a junior pilot kitchen program where kids can come work with me for the summer, or for a semester or so, and get high school credit,” he explains. “Also, I'd like to figure out a way I could link that towards them if they decide to go to culinary school.” For Abdullah, he’s all about, “The introduction, the interest, the expertise. And then you move forward.”

His mind goes a mile a minute dreaming up various ways of connecting local farms, businesses, creators, and kids. He wants the produce he uses to come from local farms, “then the next step is our brand will help them expand to hopefully get more land, hopefully create more customers that want to buy from them.” Partnering with hyper-local farms means that he can teach kids how to farm. “Small scale agriculture,” he expounds, “There's food science here right now. And then I provide the cooking side of it and the education side of it.”

“It's not even about the idea of becoming a chef. It's just understanding where food comes from.” He gets excited about the idea of keeping kids off the streets, or even just off their cell phones, long enough to plant some seeds and watch them grow. “They need to be outside. And the thing is, with tech, it keeps them so occupied. So instead of us older generation trying to fight it, we should just accept it, but figure out how we can incorporate the two. I bet if I come up with an idea for them, they can all use those skills and create something.”

“We're really just wanting to create good communal ideas for the neighborhood, so kids can actually feel like they can do what we did when we were kids. Just roam the neighborhood. But there's things that are keeping them busy, so they're not just goofing off.” And Chef T’s approach seems to be working. “They love it. You gotta make it cool. So I'm trying to make it look cool. I'm constantly staying busy, and kids think I'm pretty weird in a cool way, so I feel like I'm winning.”

“I feel like I'm just doing what we should be doing. Most of us have some amazing skillset. We need to take time out of our life to be giving to the kids. Let the youth have it. there's a kid right now that really wants to learn how to use a rolling pin. You know what? That's what I should be spending my time with.”