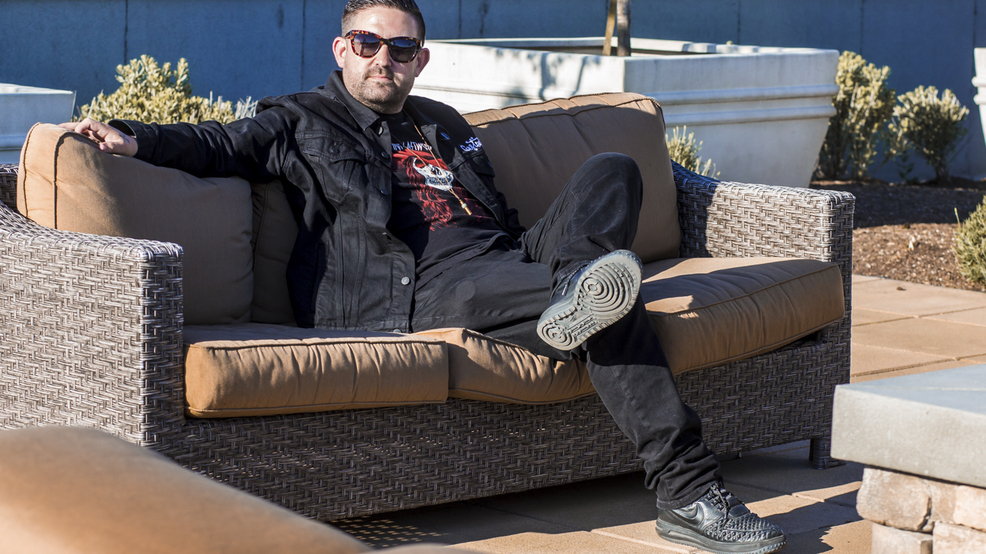 From his youth passing out flyers for local punk shows in Wyoming to producing and promoting some of Seattle’s biggest events, Austin Santiago makes the most of the middle.

“I like to be a part of the creative process, be a resource," he said. "It’s just fun being in the middle and able to connect all these people that are far more talented than I’ll ever be.”

Now the Vice President of Do206, Santiago grew up in Wyoming, where he developed a fledgling interest in alternative music scenes.

“I definitely remember dancing to Michael Jackson in the living room as a kid, but as I got into junior high, punk rock and ska became a scene I was really involved with, and I was going to a lot of shows,” says Santiago. “Pretty early in the game, I got a computer where I could burn CDs and I was making mixtapes for everyone.”

Listening to whatever he could get his hands on, Santiago’s employment at a skate shop helped him discover Wu Tang Clan and Tupac Shakur, among others.

“This stuff didn't exist in Wyoming,” he recalls. “Wyoming was punk rock, metal, and then mainstream stuff that would be big enough to make it there. On the radio you might hear a Dr. Dre song but you had to get to that level to make it all the way to Wyoming at that point.”

It wasn’t long, though, before Santiago made his way to Bellingham just four days after high school graduation, in search of a change of scenery. What he found - besides an excess of the Pacific Northwest’s famous greenery - was a scene. And out of that scene, Santiago built a community.

“I loved the trees, I loved the weed," he smiles. "I loved the vibe, the ocean. It just felt so drastically different in a good way. When I moved to Washington I got obsessed with this lyrical hip-hop stuff that wasn't mainstream, it wasn't gangster rap. It was smart, and artful, and articulate. It just felt different to me and it really spoke to me as a young kid trying to figure it out. But Santiago wasn’t rolling in cash."

“I was old enough to go to stuff but way too broke to afford anything,” he says, “so I’d pick a show every three months.” Forced to be selective, Santiago discovered underground rap acts, bands with cult followings that were never on the radio, and the determination to find his way into the local scene with some backbone and a little elbow grease.

“I started watching who was talking to the performers and who was there every time,” explains Santiago, of how he’d introduce himself to promoters and bar managers. “Then after a while I was like, ‘So, I wanna come to the show but I can’t really afford it. Is there any way I can help?”

In the days before online promotions, Santiago would pass out handbills and create posters for upcoming shows in exchange for free access, but it wasn’t long before he knew the scene well enough to help book openers at local venues. “They would book a national headliner and I was the most in tune with the Northwest hip hop community, so they'd be like, ‘Hey, we booked this person, who would be a good fit?’ I was just around it enough to have a perspective on if the artists could bring people and what their music was like.”

Santiago worked with a local restaurant to book weekly music gigs, and began doing event coordination with his community college. “They gave me a budget and I wanted to do a festival with all the best musicians, singers, poets. I just wanted it to be this big collaborative thing,” he says. This sudden freedom gave Santiago the jumping off point he needed to brand his future, pairing up with a friend to start a clothing company that would become the face of their promotional entity.

Thirteen years later, BuildStrong is still doing just that, with a handful of up-and-coming musical acts on its roster. “It’s about being able to accomplish more as a collective than you can ever accomplish on your own,” says Santiago. “That was the mission statement of the event and now we do artist management and maybe 15 events per year. There was a four or five year stretch where we were averaging about 200 events per year.”

Not one to be satisfied with a single venture however, Santiago picked up more gigs along the way, from managing Odesza’s first tour to acting as a talent buyer and marketing director for Bellingham’s Wild Buffalo venue and Summer Meltdown, a festival of music and camping in Darrington. And then, in 2014, a colleague nudged Santiago to apply for a position as General Manager of the newly launched Do206.

Part of the DoStuff network, where local teams help you find the latest and greatest things to do in each city, Do206 is kind of like a “calendar with benefits.” Not only will you find the hottest concerts, ticket giveaways, and community events, you can also find guides on “free and cheap” things to do, the city’s best mac and cheese outposts, and summer hangout spots.

It wasn’t right away, though, that Santiago jumped on board. But a couple of years later, with Santiago at his tipping point in Bellingham, another colleague hit him up about the GM position. Just over two years later, and with plenty of successful events and partnerships under his belt, Santiago is now Vice President.

“The Do site model is essentially a resource,” says Santiago, “In the simplest of terms it's a listing site, an easy way to see what's happening in the city. But the reason why we're a little bit more involved, a little bit more respected than a lot of the other versions of this idea, is that we're something like a creative agency. We do a lot of partnerships, we do lot of creative marketing for the events that we create. And for a lot of other people’s events. We do a lot of non-profit work.”

From this year’s Protest Fest—held on President’s Day to showcase different genres of music, each benefitting a nonprofit near and dear to that community—to a summer concert series with local brand Filson, Santiago stresses the community-oriented nature of everything he does with Do206 and beyond. “Our mission is to be a cultural institution,” he says. “To be a resource for stuff we support that may not get the shine it deserves but also to be a bridge between larger profitable companies and the community.”

“We’re in the middle,” says Santiago. “They look at us as like a tech site or, because we're an app or an email list, we speak their language but at the end of the day what makes our campaign successful is connecting with our own creatives. Getting the right DJs or the right visual artist.”

“Some of our biggest partners are in music, so our users can win tickets to Live Nation concerts, from the sold out Pearl Jam shows to Sasquatch,” he reiterates, about one of the major benefits of their platform, “but we also work a lot with Crocodile, we work with STG, Carter Subaru.”

Santiago isn’t one to brag without a side of self-awareness, though, as he recaps Do206’s annual BeatMatch competition. “The one blaring issue we had last year, and this year,” he says, “was the lack of non-male identifying people entering.”

“Part of it is outreach, like us not being connected, or cognizant, or aware enough, to reach the right people. And then some of it is just a larger issue in music in general,” Santiago notes, of the much higher percentage of male-identifying music producers making headway in the industry.

“So we partnered with Cliff Bar, and we've been talking with them and Ableton and we're working on a non-male identifying Ableton class that is free, trying to just do our part as an entity to offset and give the tools to people that want to learn how to do it but maybe haven't had the opportunity.”

Creating connections and access is clearly a motivation for Santiago. While he’s lending his curatorial ears to the Do206-sponsored stage at Upstream Music Fest for the second year in a row, he’s also offering his professional experience to a summit panel on artist management. Santiago can’t stress the importance of this overlooked side of the Upstream experience enough.

“They're curating the most relevant opportunity for anyone in Seattle that likes music or wants to learn about music or wants to create music. They're creating an entire platform and day for you to learn. And so all these people that want to pick my brain, they better spend $25. That's nothing. That's like going to a show. All those people need to go to the summit and just really take notes and connect with the speakers and connect with the panelists and follow up with them.”

For those with a more passing musical interest, though, how does he recommend navigating the diverse stages of the festival? “I personally like the idea of looking at the curators, as everyone’s curating a stage with some sort of intention. Some are hip hop, some are rock. Our artists all fall under the soul, R&B, pseudo-electronic realm.”

You can also find some of his artists, and more, filling the gaps of the Sasquatch! lineup with stellar DJ sets, something he was asked to curate for a second year. “Through my community, I was able to create a pretty cool experience for a lot of people at Sasquatch. Just over here being excited about doing my little thing whenever I can and helping whenever I can.”

“Really I'm like the 100th most talented person in my immediate circle. Everyone's better at stuff, the one thing I'm good at is being connected. So I'm like the kneecap and everyone else is the bones. That's what my skill set is,” says Santiago. And those connections are paying off, leading to bigger and better events, not only for him, but for the community at large.