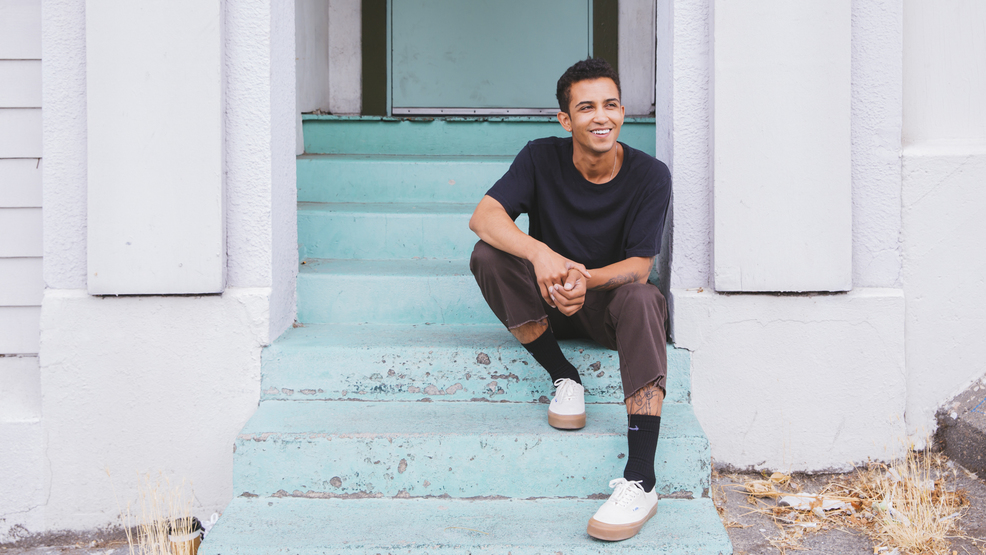 Arguably one of Seattle’s hottest up-and-coming artists in his own right, when we talk to Anthony White, he has much more on his mind - and plate - than the plethora of personal wins he’s riding the high of.

The recent Cornish College of the Arts grad has, in the span of a single weekend, been featured on the walls of Greg Kucera Gallery’s space at Seattle Art Fair and opened a solo show at Glass Box Gallery, transforming the space with full-scale interactive environments and plenty of new work.

“You never need approval or anything like that,” says White, when asked how he’s feeling about his accomplishments. “But I think having a good response is encouraging and motivating. And it’s fun, ‘cause I get to meet a lot of people.”

Hyper-textural and intimately detailed, White’s work explores ideas of nostalgia, status, wealth, and digital intimacy. There are candid selfies, everyday consumerism, and highly imaginative environments, and they’re all painstakingly created out of plastic to reflect a narrative that White sees in his head.

“A lot of people see the work on a screen and they’re like, ‘Oh, this is cool,’” says White. "But, you have to see them in person.” And you do. It’s quite different to explore the movements of line and pattern, the material nature and luxe texture, of his works, which range from large-scale panels to intimate hand-held objects.

Yet with all the interest in White’s own work, it is his curation of While Supplies Last - a recurring group art show - that he is most excited to talk about when we visit him in his new Central District studio. “I think everyone deserves to show the things that they’re interested in,” says White. “Especially when it’s a good conversation starter.”

This community-building project, created with the support of Dawna Holloway of studio e gallery, was launched as a way to showcase artists from all over the world while making it affordable and accessible for new audiences. And for each show, White curates and organizes the artistic contributions of more than 200 artists.

“It's so much work. The shipping and receiving and cataloging and photographing all the work,” says White, showing us a table full of contributions. But it is clearly a passion he relishes. “A lot of people are just trying to support each other, and that’s great.”

Featuring mostly works on paper in a standard nine by twelve size, White labels each piece with the artist’s name and Instagram handle before slipping it into a protective sleeve. During the show, the works are stacked on tables for people to freely rifle through, enabling a discovery process that often leads to surprising finds.

“We set the price tag for each piece at 30 bucks,” says White. “It's a way to give young people or people who don't have the privilege of buying art an opportunity to do just that.”

Asked about his curation process, White grins and says, “It’s kind of embarrassing, but I am on Instagram all day. It’s a way for me to see so much work and find people that are friends of my friends' friends that make art that I think is really freaking awesome.”

And those friends’ friends? They encompass a wide range of artists from those already well-established to high school-aged kids with their sights set on art school. “It’s not necessarily about the sale,” says White. “It’s about just the experience or wanting to see what people think of the work.”

It’s also about further expanding a community of artists and appreciators, says White. “We try to catalog to the best of our ability to link the buyer with the artist. So, we'll keep a list of who buys what.” And with each occurrence of the show, the excitement is growing. “The Instagram is doing pretty well,” says White. “People are like ‘Oh, I’ve been following this page for a few months now and I’d be more than happy to participate.’ And I’m not gonna turn anyone down!”

“I make a lot of relationships through the show,” says White. “WSL has been an awesome platform. A lot of these artists wouldn’t know each other, and then once they’re featured on the WSL page, when they’re following the page, or an artist comes to the show, they get excited about being in the same show together.”

WSL’s first installment at Amandine Bakeshop during Capitol Hill Art Walk was a bit of an experiment, but, “When Dawna saw how the first iteration of the show turned out,” says White, “she was like, ‘Okay, do whatever you want. Advertise it, give artists opportunities that you think deserve it.’ So that’s exactly what I did.”

“It’s a little different every time,” says White. “But from the start it’s had amazing support, amazing turnout. All these people heard about it on Instagram. I was in shock.”

With their fourth iteration coming up September 28, they’re trying out a new space in International District called Gift Shop Gallery. “We're trying to hit different areas of the city so more people, different people can access them. And this time it won't be on a first Thursday, second Thursday, or a second Saturday. It's gonna just be on a random Friday. So, we'll see how that goes!”

On top of preparing for his own upcoming shows, White’s nurturing of WSL is clearly so passionate that we don’t doubt it will continue to go well. And by the Instagram preview of works heading to the next WSL installment, you might want to get there early, because like the name says, pieces are only available while supplies last.