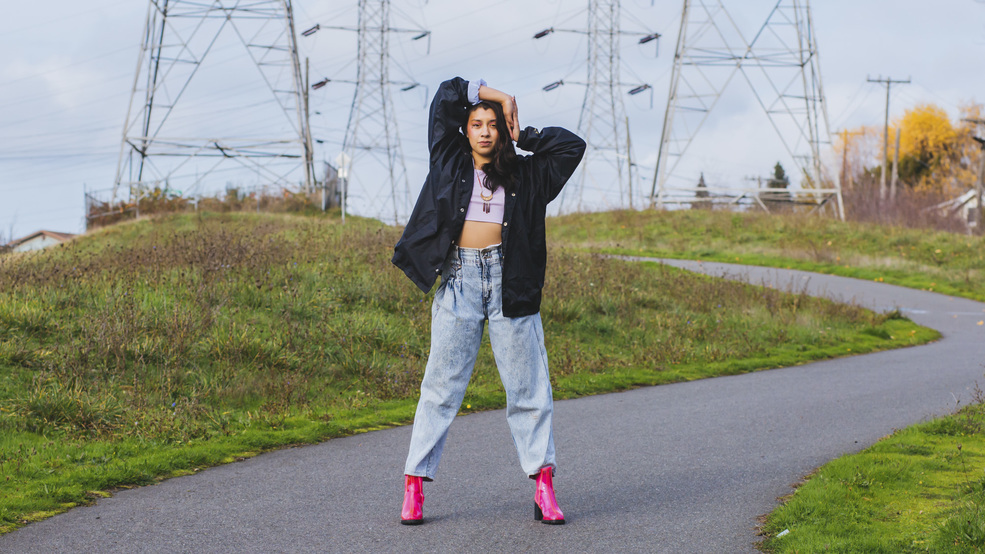 From a shy teenager with untold talents to a teacher of storytelling and the healing power of movement, Angel Alviar-Langly, a.k.a. Moonyeka, is busy trying to change the world of dance, bringing unique style, sass, and substance to the Seattle scene.

The director and facilitator of Seattle’s Lil Brown Girls Club, and founder of What’s Poppin’ Ladiez?!, among other creative pursuits, Moonyeka isn’t just dipping a toe into the community, but leading it. And as a queer mixed-Filipinx femme, using her own experience to create safe spaces for those underrepresented within it.

Moonyeka grew up in a predominantly browner community in unincorporated King County. “I didn’t have access to ballet or other studio dance classes," she explains.

“It was a lot of money for my family, and I lived in a district that just had no arts funding.” But what she lacked in exposure to Western forms of artistic movement, Moonyeka found in breaking cyphers - those circles of B-boys and B-girls that pop up whenever and wherever they find space.

“I didn’t really know what they were at the time,” said Moonyeka. “But we were dancing socially. We didn’t recognize that as a profession, though. It was just what you do.”

The more she did it, the more intrigued she was.

“I got more interested ‘cause I grew up really wanting togetherness in spaces,” Moonyeka says. “There's a word in Tagalog - ‘kapwa’ - and it means essentially togetherness or interconnectedness. So, what is your relationship to the land? To this person over here, to yourself? How does that all integrate? I think it comes down to everybody participating in the community, whether that's actively doing a healing art or absorbing the art.”

After trying ballroom dance - where she questioned needing a male partner to participate - Moonyeka found herself in the Running Start program at Highline Community College. Despite being a wallflower, Moonyeka continued to hang around dance spaces until others pushed her to come out of her shell.

Studying street dance styles and the community around them, Moonyeka found that there wasn't a lot of academic language around that kind of movement.

"There’s not a class that you go to to learn it, or a book you can pick up with the history of it," she said. "It’s a community-based education.”

And while attending the University of Washington’s dance program, she took a critical look at the lack of academia around Black and Latinx diasporic dance forms.

“We weren’t talking about the dance forms happening right now, the ones being exploited into performance art spaces as really edgy," said Moonyeka. "There’s just not a lot published on it, or when I would find something it was like, ‘Oh, yeah, this is not written by folks who are actually part of the community.'”

Continually finding a lack of personal representation in an art form she loved stood out as something to change. The world of breaking that Moonyeka found herself in was predominantly male.

“A lot of times when I would see women battling a dude, it became a conversation about gender,” says Moonyeka. “Females are often forced to go head-to-head with someone who should be supporting them. Femininity is weaponized and women in the scene were rivals against each other, even though there were maybe seven of us, maybe.“

That lack of representation led Moonyeka to create What’s Poppin’ Ladiez?!, the structural opposite, made up of “all women-identifying deejays, all women judges, all women invitees, giving them a platform to speak their own truths and share space with each other." This community event series provides women-identifying people a platform for storytelling through teaching, battling, performing, and more.

“I recognized that there wasn’t a lot of conversation around what it means to be powerful in your body," she said. "What does it mean to be in a street style community where it's predominantly men? Even the competition itself is super-toxic in my opinion. It's literally a dance community where we get together to compete against each other. What kind of community just competes against each other? And it's like, ‘Oh, a community made by men.’"

On top of her personal investment in the battle scene, Moonyeka also taught a lot of local kids at schools that faced a lack of arts funding.

“The programs would end,” she said. “And the parents would want to know where I am. Eventually, I just had students who wanted to keep dancing with me.” And Moonyeka purposefully kept those students outside the typical studio space.

“I wanted to complicate what teaching looks like, and what learning looks like,” Moonyeka explained. “Because I don’t really learn in a class space that’s facilitated by a single teacher. The genius is in the space, the people around you.” And so, Lil Brown Girls Club was also born.

The name came from her students.

“They're super rad,” said Moonyeka, who uses the space to help young girls of color find healing and comfort in their own skin, beyond just dancing. “A lot of the students are super uncomfortable in their own body, even at a young age. We really talk about things like what it means to say no, what you feel when you do, how you can be in your power, how you set a boundary.”

Students do embodiment practices to help illustrate these ideas.

“We use dance as a way to represent what we’re learning,” she said. And then they get to make and perform their own work.

On top of all this, Moonyeka continues to create as well, and can be found at various events around town.

“I'm an artist, but I'm not into the idea where I have to be validated by making work nonstop, just producing work, work, work,” she says, “I'm interested in how we can build spaces where it's less about commodifying our storytelling and more about what it means to just dance together without a goal of showing work and getting money all the time.”

Constantly on the lookout for new ways to structure learning and community, Moonyeka describes an ideal space supported by pooled resources.

“Instead of spending $100 a week going to class, what if we all just went in on a space?” she asks. “We could really talk about goals, what we want to play with, how we approach movement, where it comes from. It’s just a conversation.”

For now, Moonyeka will keep at it, though.

“I personally think it's artistry if you understand your own power. That's super great. That's the most radical thing that you can do is to know yourself. Because I can't know you. I can't really know you if you don't know yourself. You don't need anyone's permission. Just do it.”