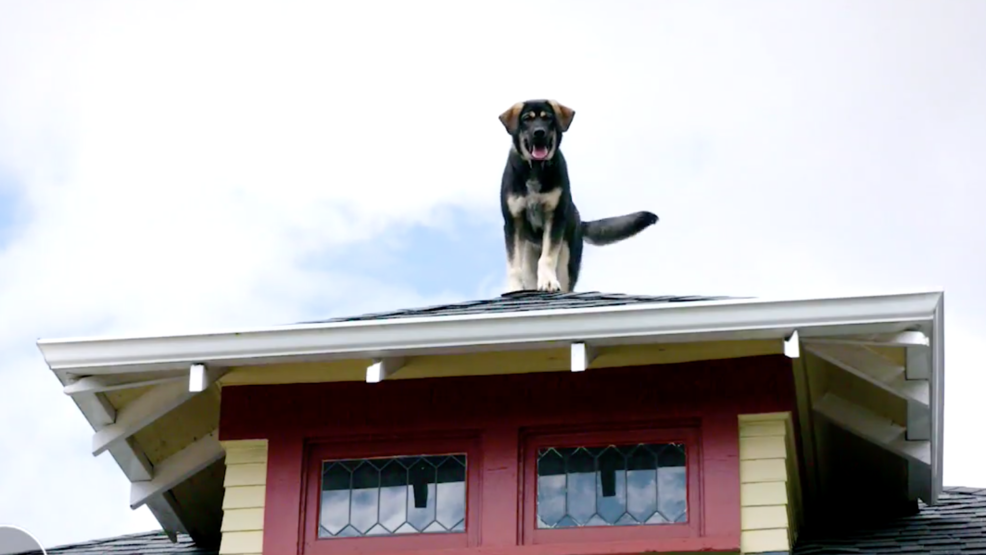 It's a bird! It's a plane! It's Rumple the Roof Dog

It's a sight you don't see everyday on the quiet streets of Ballard. One that sets tongues - and tails - a'wagging.

"I'd been looking for a dog for almost a year and finally when I saw him with his picture I just knew he was my pup," said his human, Robi Holmes.

The Newfoundland Husky mix was the perfect pooch for her.

"He's pretty big, but just such a lover that we got a long right off the bat," she said.

They're home, getting to know each other and bonding - and then Holmes stepped out for some errands.

"I left him home. He didn't really chew on anything," she said. "He was a really well-behaved pup so I left him in the house with the back door open for an hour when I was out running errands."

Then - she got a weird call.

"My neighbor called me to let me know he was on my roof," she said.

How'd he get on the roof? Holmes realized this Rover had gone rogue. The crafty canine had made his way up some stairs, across a deck - and then hightailed his way onto the roof!

Holmes was floored to see her 75-pound puppy on her roof.

"He seems super comfortable up there," said Holmes. "It's like his favorite place in the house. But it makes me really uncomfortable that he gets up there. If he falls he's a giant puppy - I mean he trips over his feet walking to the living room floor. So I don't know if I trust his ability to stay surefooted on a super-slanted roof."

Plus, the pup is still growing!

"At four months he was 65 pounds and they anticipate him to be twice that weight," she said. "So close to 130 pounds is what we're expecting." Even though she loves her pup, and wants him happy - his roof-sitting days are numbered.

"I have a contractor coming to build a gate," said Holmes. "Although my Nana is trying to convince me to build a little perch up there and let him be. So we'll see who wins out."

For now, the precocious pup is perfectly happy with his view from the top. Passersby paws when they see him.

"I've had people knock on the door to let me know there's a dog on the roof just to make sure that I knew," she laughs.

For Rumple the Roof Dog, the sky's the limit.

No dogs were harmed in the making of this segment. Holmes is actively working on making sure Rumble is safe and sound at all times. Thanks in advance for your concern!