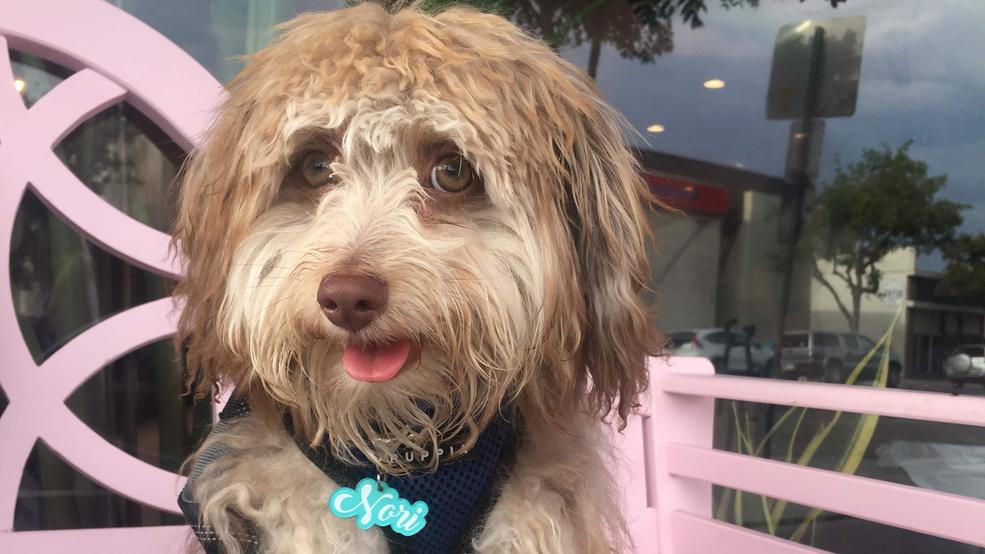 Meet Nori, the adorable dog with a human face

He's an Instagram star with fans the world over. He's appeared on TV shows from England to Japan. He's...an Aussiedoodle. Nori is an adorable pup, with a very human face (and he just so happens to be Refined editor Tri Ngo's grand-dog).

A lot of people say he looks like something from 'Star Wars'," said Kevin Hurless, Nori's dad. "People would say Chewbacca, people would say Ewoks, Fizzgig from 'Dark Crystals', which is a character from a movie. I think one Tiffany got was [Jeff Daniels] from 'Dumb and Dumber'. So we get a lot more humans, people comparing him to humans now."

Most recently, Nori was compared with the one and only Seth Rogan - who, after being tagged hundreds of times, responded that he was "flattered".

Nori lives near Seattle with his brother Boba, a Shih Tzu-Yorkie mix, and their humans, Tiffany and Kevin.

"Nori is very sweet. He wants to be friends with everyone, all dogs and all humans. Boba is a little different," explained Tiffany with a laugh. "He's also very sweet but he's a little more stubborn. They're best friends. They're always together, they're always playing with each other. They'll play a lot and end up fighting so people say they're like real brothers."

While Boba is adorable in his own right, it's Nori's unique look that tends to get people to paws what they're doing.

"What we get the most comments on are his eyes. People feel like the eyes and smile are what make him have human features," said Kevin. "He's a very smiley dog and his eyes haven't changed since he was a puppy."

Nori and his big, bright eyes have always been a favorite of the neighborhood puparazzi, but with one single tweet he went from local celeb to worldwide star.

"He's had an Instagram account for a while, and Kevin responded to a Tweet about this dog who looked like a human," explained Tiffany. "He tweeted four different pictures of Nori and it took off from there. There have been articles about him all over the world."

"We've gotten a lot of followers or comments from people in Colombia, people in Russia, people in Japan. Just seeing the joy people are getting in finding him and letting us know they're seeing him in their country, it's really cool," added Kevin.

"It's really nice knowing Nori brightens someone's day," said Tiffany. "People have commented that with the news today it's been a bright spot seeing the story about Nori and his cute little face. That makes me happy knowing he contributes positivity in this world."