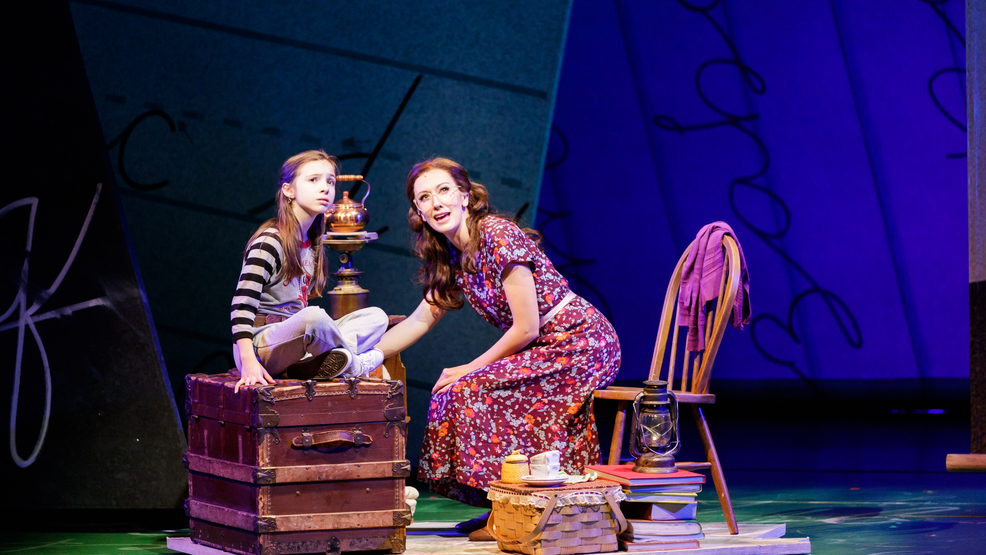 Matilda: The Magical Misfit with a Message of Empowerment

It sounds like a big order for a little kid.

"Matilda is the story of a young girl who lives in some unfortunate circumstances," explains Kathryn Van Meter, the Director and Choreographer of "Matilda", currently on stage at The Village Theatre in Issaquah. "Through the power of story and getting lost in books and understanding how expansive the possibility of how a world could be, uses her mind triumph over evil."

The musical is based on the book by author Roald Dahl who wrote other classic children's books including "James and the Giant Peach" and "Charlie and the Chocolate Factory".

"It was written by Roald Dahl in 1988," said Van Meter. "He was deeply afraid that kids were going to stop reading so he wrote the book to celebrate the power of books and stories and libraries."

In the the show, Matilda is misunderstood by her family and some of the other adults in her life are downright awful. But she finds friendship and love with a kid teacher named Miss Honey and a group of loyal pals.

Speaking of kids - the young actors in this show starting preparing over the summer. In addition to studying singing and dancing - they did CrossFit to be ready for this physically demanding musical.

"There are fourteen kids in the production and seventeen adults," stated Van Meter. "There are two lovely actresses who are playing Matilda."

Both eleven years old - Holly Reichert and Nava Ruthfeld take turns in the title role. For them, playing a complicated character is a lot of fun.

According to Reichert, "Sometimes she'll be a little bit naughty and sometimes she a little crazy and she does some pretty unique stuff that you wouldn't expect."

"She know some things just aren't right and someone has to change them," adds Ruthfield.

When Matilda discovers she has magical abilities, she also realizes she has the power to make things better. It's an important message for everyone.

The two lead actresses says Matilda is a character that inspires empowerment.

"The message is that someone one person can change someone's entire life," states Reichert. Her co-Matilda Ruthfield sums it up nicely. " Even if you're little you can do a lot."

There's singing, dancing and surprises. But this family friendly show also has a lot of heart.

For Van Meter, 'Matilda' is a story full of hope. " I think it is an incredible time to show the power that young people have to change the world."

You can catch 'Matilda' at Issaquah's Village Theatre through December 30, 2018. The show moves to Everett from January 4 -February 3, 2019.