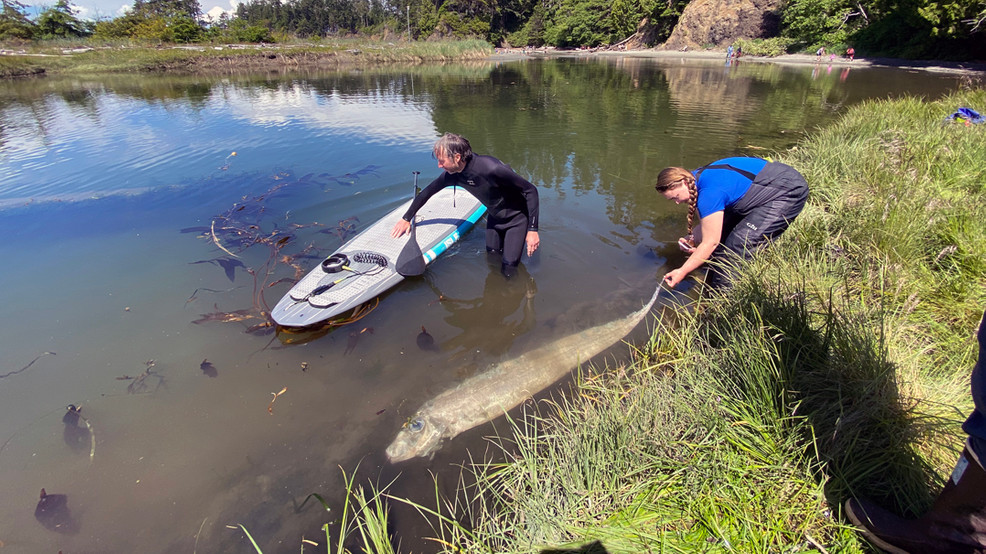 Talk about a big fish!

Staff of Harbor WildWatch, a Gig Harbor-based environmental education nonprofit, were on a beach walk at the Salt Creek Recreation Area near Port Angeles earlier this month when a paddleboarder told them there was a "massive, dead creature" washed ashore.

"A paddleboarder in the creek called out to us, 'are you biologists?'" said communications specialist Carly Vester. "He let our team use his paddleboard to take a look and helped us gently bring the animal on shore to take a closer look."

It turned out to be a King-of-the-Salmon, a deep-sea fish rarely seen in the wild. They typically live 3,000-feet deep from Alaska to Chile along the Pacific coastline. According to Harbor WildWatch, only four or five — most recently in 2018 — have been documented washing ashore from British Columbia to Washington.

This particular King-of-the-Salmon fish was about 4.4-feet long with eyes the size of a coffee mug. Rachel Easton, education director of Harbor WildWatch, estimated it must have washed ashore no more than three days prior and likely was caught in the surf. The team left the fish where they found it and notified the Washington Department of Fish and Wildlife of the find.

"I had never seen anything like this," said science specialist Stena Troyer. "And we have discovered some incredible things on the beach over the years."