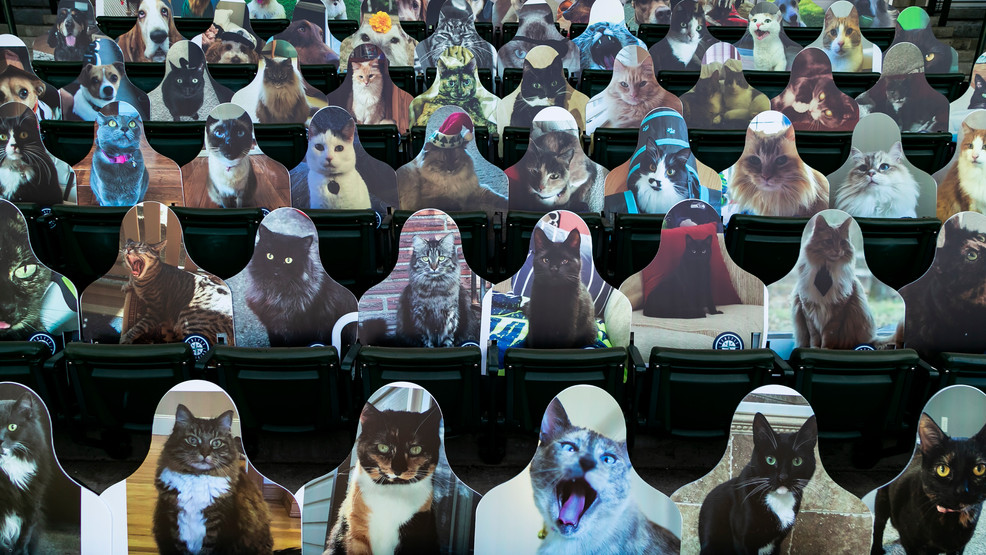 The crack of the bat. The pop of the glove. The sweet sounds of Mariners baseball. The action on the field looks pretty much the same as any other season, but instead of fans - the stands at T-Mobile Park are filled with cardboard cutouts, and section 221, well it's home to some of the M's furriest supporters.

"I mean, how fun could that be that the Mariners are playing, they look up and there's this entire section of animals just looking down at them," said Son Bauer-Lane, who created the idea for the animal-centric section of the stadium.

Bauer-Lane admits she's only a casual baseball fan, but she is...a cat person.

"I love animals," she said. "I'm a huge advocate for animals, but if someone said I had to choose between a cat and a dog, I'd go with a cat every single time."

Bauer-Lane and her family foster cats, often kittens that need to be bottle fed. As you might expect, sometimes those fosters become permanent residents. Herman was one such 'foster fail'. Laid back and impossibly cool, he earned the nickname 'Captain Herman' after being diagnosed with a serious medical condition.

"He was given this cat cave as a present," explained Bauer-Lane. "He immediately climbed right in. That became his safe space. It looked like a little space pod and I jokingly said 'there's Captain Herman and his space pod'. It became a whole thing in our house."

Through a combination of extraordinary veterinary care and love, Herman survived and thrived for 18 months after his diagnosis. But in March, Son and her family were forced to say goodbye to the Captain.

"He was such a good cat. Everybody was just gutted the day he had to fly the galaxies," recalled Bauer-Lane.

One gut punch, followed just weeks later by another. As another beloved feline family member, Theo, passed away unexpectedly.

"My daughter made a comic book because she likes to draw and she dubbed Theo 'Engineer Theo' because he had back issues and he had health issues. He just always had this attitude of 'I'm just happy to be here'," said Bauer-Lane.

This all happened during the early days of the pandemic. Stuck in lockdown, Bauer-Lane found herself searching for a way to celebrate Herman and Theo, to turn a negative into something positive.

"I was just looking for something that would be fun. I saw this Seat Fleet thing for the Mariners and I thought to myself 'That's kind of cute. How fun would it be to see those two up in [the stadium],'" she recalled.

With fans unable to physically attend games, the Mariners created the Seat Fleet, customized cardboard cutouts to populate the stands at T-Mobile Park. The proceeds benefits All In Washington to help with COVID-19 relief efforts in our state. She posted her idea to the Cats of Bothell Facebook page expecting five, maybe 10 people would be interested.

"The next thing I knew I was flooded with people who said 'Yes, we would love to be there with Captain Herman and Engineer Theo'," said Bauer-Lane.

Words got out, spreading to other groups of animal lovers in the area. Now, if you look to section 221 you'll see more than 70 animals watching over the action, mostly cats and, yes, a few dogs.

Among the sea of furry faces, Herman and Theo, the two who started it all.

"I found myself slightly overwhelmed by it," said Bauer-Lane. "Then I reminded myself to put that aside and just be in the moment and the joy of what had just happened. That is a whole bunch of strangers all came together for one cause that was started by two little cats that meant so much to you and look what came out of it."