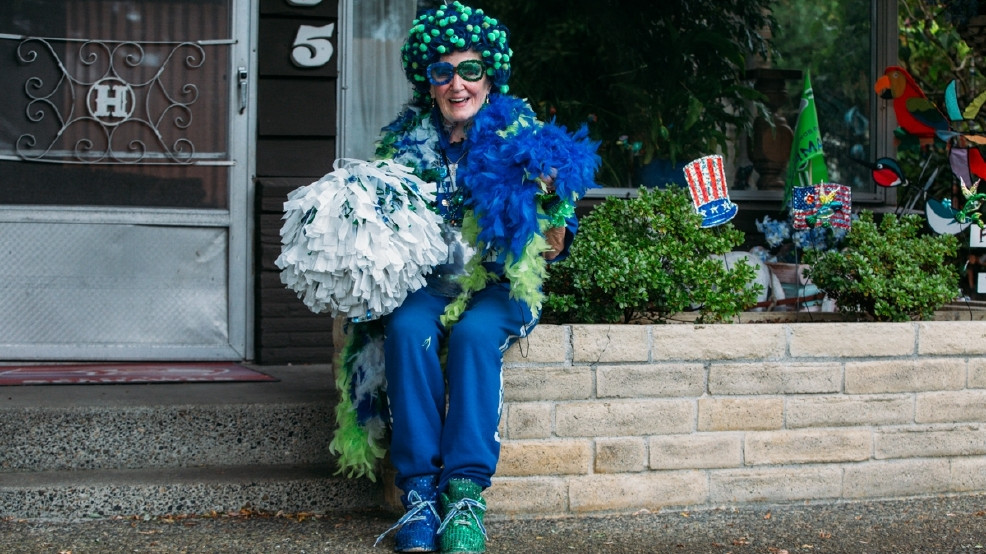 Mama Blue, a Seattle icon and one of the most devoted Seahawks fans since 1976, is battling pancreatic cancer.(Image: Seattle Refined)
SEE MORE

But in true 'Mama Blue' style, she's not going down without a fight.

"She’s raring to go, she hates the waiting," said friend and fellow 12 Norb Caoili. "She still has her signature sense of humor. If anyone has the mental toughness to get through this, it’s her."

Caoili reports that Mama Blue never thought she'd get cancer because she prides herself on being healthy, she's apparently never even eaten a fast food burger, or smoked a cigarette!

"I'm just following the yellow brick road," she told Caoili on the phone recently. "I started radiation and chemo this week."

Her friend tells us that she's tired and nauseous, but says "if [this treatment] keeps me above dirt for the next couple of years then I'm all for it."

Mama Blue wants to see her 90th birthday, which is only a couple months away.

She told Caoili on the call, "sometimes my arms don't work and my legs don't work, but you know what still works? My mouth!"

Caoili is part of the force behind a fan-based charitable organization called Fanz 4 Good. The organization started the 'Mama Blue Fund' to help tackle her mounting medical bills. We're told Mama Blue is on a fixed income and still in the early stages of the diagnosis - "and bills are quickly adding up."

Support though, has been pouring in.

Mama Blue is a BIG DEAL in the Seahawks world. In 2007, she became the first fan to raise the 12th Man flag at what is now CenturyLink Field. She even has her own Seahawks fan toy figurine and was enshrined in the fan hall of fame, inducted in 1999.

You can't miss Mama Blue in the stands. She's known near and far for her transformation before every Seahawks game with a blue and green wig, blue sweats with her name printed boldly on the back, and shiny blue and green shoes.

She's been a Seahawks season ticket holder since the very beginning. Coach Pete Carol even responded to a letter she wrote him for her 80th birthday. Some advice she gave KOMO News nearly 10 years ago about getting older:

"Just enjoy it," she said. "Age is only important if you're a wine or a cheese."

Mama Blue tells Caoili that the Seahawks community continues to surround her with support, "I feel so blessed, I'm getting flowers, I'm getting all kinds of stuff, " said Mama Blue to Caoili on a call, I'm getting spoiled and I'm kind of liking it."

You deserve it Mama Blue, keep fighting and GO HAWKS!

You can donate to the Mama Blue Fund online.