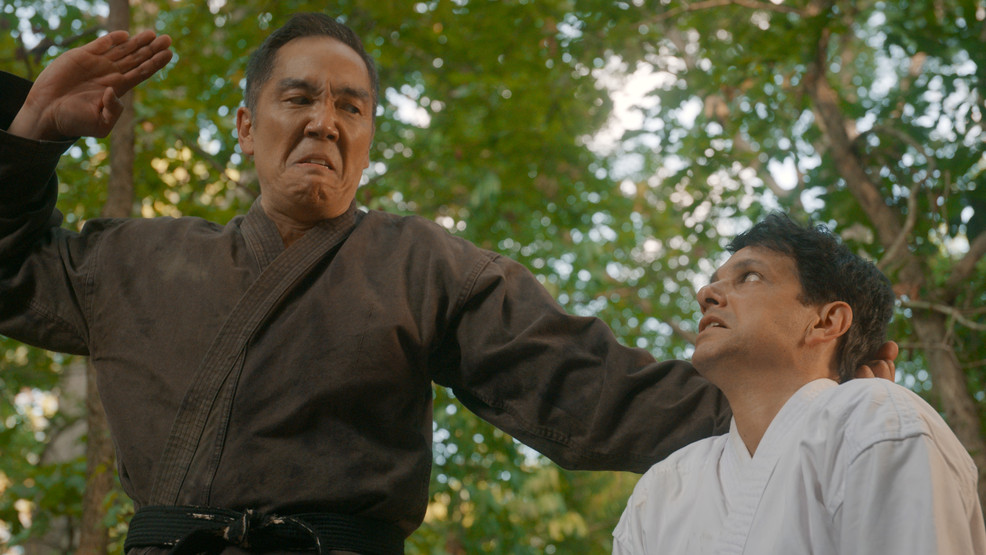 Refined first caught up with Seattle's own Yuji Okumoto a few years ago at his restaurant Kona Kitchen, located in Seattle's Maple Leaf neighborhood. At that point, the multi-talented Okumoto shared that he was part of a new film called "Beta Test". Besides acting in it, he was also had a bigger role behind the camera, as associate producer. Since then, he's continued acting - including reprising one of his most famous roles as the character 'Chozen' from the film "Karate Kid Part 2." We caught up with him to hear all about what he's up to now.

Seattle Refined: Yuji Okumoto - you are an actor, producer and restauranteur! You own Kona Kitchen right here in Seattle.
Yuji Okumoto: That is correct.

With the series "Cobra Kai" on Netflix, the characters have been reimagined. It’s been 35 years since we’ve seen Chozen in epic battle at the end of "Karate Kid Part Two." How did you get the call that Chozen was coming back?
They sent me the script and I read it and I thought - ‘Oh you know I’d like to see some changes with Chozen’s character’. To think about fast forwarding to today, and be able to reprise the same character from thirty years ago to present day in a show like 'Cobra Kai'...I kind of made a list of things and emailed it back to the writers and they were just so gracious and accommodating. They wanted to make sure they showed deference to Chozen.

What was it like getting back in the game after all this time, and doing an epic battle scene with Ralph Macchio?
Ralph is amazing. He’s such a warm, generous wonderful person. So stepping into this role and working opposite him - there’s no better place to be.

How has Chozen changed?
It’s more about how he realized his mistakes in the past and tries to rectify them.

You and wife Angie are parents to three daughters. Do they think you’re cool now that you’re in "Cobra Kai"?
Once the show came out and they saw the episode they were really excited.

You’ve been acting for a long time now, [you've] been in over sixty major movies and TV shows - do you feel like roles for Asian American actors have improved since you started?
Yes, and it’s not about more parts. I think it’s about better parts. We still have a ways to go, of course. I think the more people of color get involved in the business I think the better off we are.

You are also a restauranteur! You’ve got Kona Kitchen with two locations. What’s been going on with you guys in terms of the pandemic?
We have lost two family members. One, Liz Mar who is my mother-in-law, she was the matriarch of Kona Kitchen. She’d also greet the customers with her warm smile. Talk story with everybody. It was a tough go. The outpouring of support from the community was really incredible.

Your restaurant features Hawaiian food. What have you guys been serving a lot of?
We have the Katsu Fried Rice which is extremely popular, Spam Musubi. We have breakfast lunch and dinner.

I’ve got to talk to you about 'The Paper Tigers'. You’re producing, [and] you are in it.
It’s a story about these three King Fu brothers who as teenagers have a falling out - but they have to come back together as adults because their Sifu, their master, has been killed under mysterious circumstances. And they’re much older, so they’re probably one kick away from pulling a hammy. So that’s where the comedy comes in. They’re gonna be releasing it in May of this year.

You kicked butt in this season of 'Cobra Kai' - Ralph Macchio’s [Daniel LaRusso] to be specific.
Finally!

Could you kick William Zabka’s butt [Johnny Lawrence]?
Johnny kind of took a hiatus from teaching and got a little side tracked. I believe he has a leg up... NOT sweep the leg! A leg up on Johnny Lawrence.

It’s so fun talking to you and congrats on all your great projects!
Thank you so much, I appreciate it.

You can watch Cobra Kai Season 3 on Netflix. For more on Kona Kitchen, check out their website and Instagram feed.