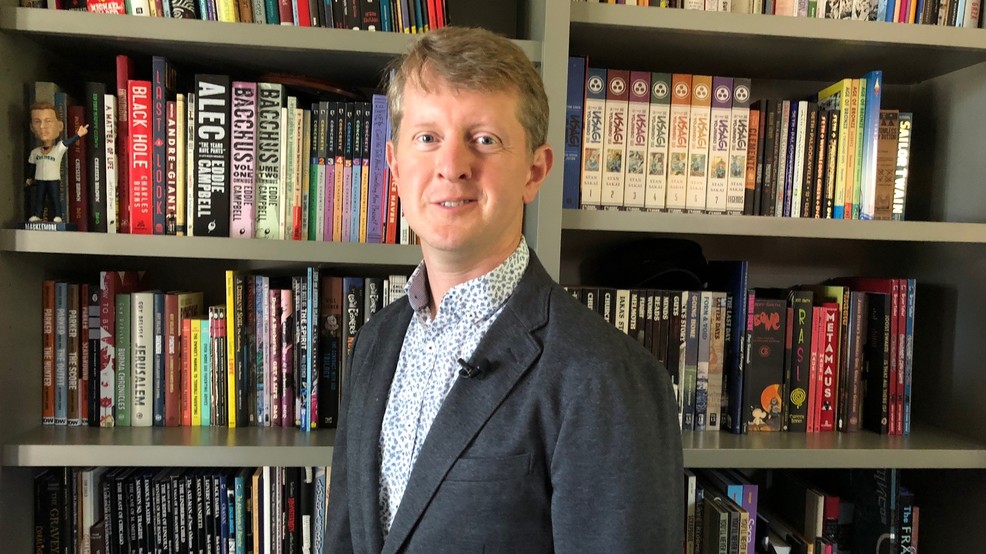 Ken Jennings is a Jeopardy! champion and prolific author. His newest book is titled 'Planet Funny: How Comedy Took Over Our Culture.'
SEE MORE

Life After 'Jeopardy!' - What Ken Jennings is Up To Now

If you're visiting Ken Jennings at his home in Seattle, you'll probably find him typing away at a keyboard. It's a world away from how America first met the affable game show whiz in 2004 as the seemingly unstoppable champion on the Jeopardy! game show.

But after an amazing 74 show winning streak, 75 was not Jennings' lucky number.

"That morning I met a woman from Ventura who was gonna play that day," he recalls. "And usually people would be so disheartened when they saw me you could just see them take themselves out of the game right away. But she was all perky and peppy and she was like 'We're gonna play today I hope!'"

Sure enough, his opponent thought she could win, and she did.

"She did she played really well. I found both Daily Doubles and got them wrong and then the final Jeopardy was about H&R Block, and she knew it immediately," said Jennings. "I could hear her writing, and I had always done my own taxes! I could have thought about the clue all day and I would not have thought of H&R Block."

He may have lost the game that day, but Jennings didn't leave empty-handed. All in all, he had won about $2.5 million.

"It was great - for one thing, I remember this feeling of relief like - it's been a crazy six months but now I know how the story ends I get to go home," he remembers. "And I had won some insane seven figure amount of money so there was that too."

His run on the show allowed him to leave his job as a computer scientist and focus on his true passion: writing.

"I always wanted to be a writer!" he said. "I didn't realize there was a way to do it. Turns out the only way to make a living as a writer today is to win on a game show for six months - so that's what you should do kids."

His latest book is 'Planet Funny: How Comedy Took Over Our Culture.'

So, is this Jeopardy champ funny?

"People don't think I'm funny cause nobody's funny on Jeopardy!," he laughs. "So there's a very low bar when people look at me. I benefit from the low expectations."

Jennings said the book is a love letter to comedy.

The ever-productive Jennings is also the co-host of a popular podcast.

"Me and my friend John Roderick, a beloved local Seattle musician do a podcast twice a week called Omnibus," said Jennings. "We are assembling an encyclopedic collection of all of human history and culture as a time capsule for the apocalypse."

One thing that's not in Jeopardy? The chance that Ken Jennings will be slowing down anytime soon. The game show champ/author/podcaster is perpetually curious.

"I'm gonna enjoy Seattle. I'm going to travel with my family. I'm already late with my next book, which is about the afterlife so hopefully I can figure that out and get to the bottom of that," he laughs.