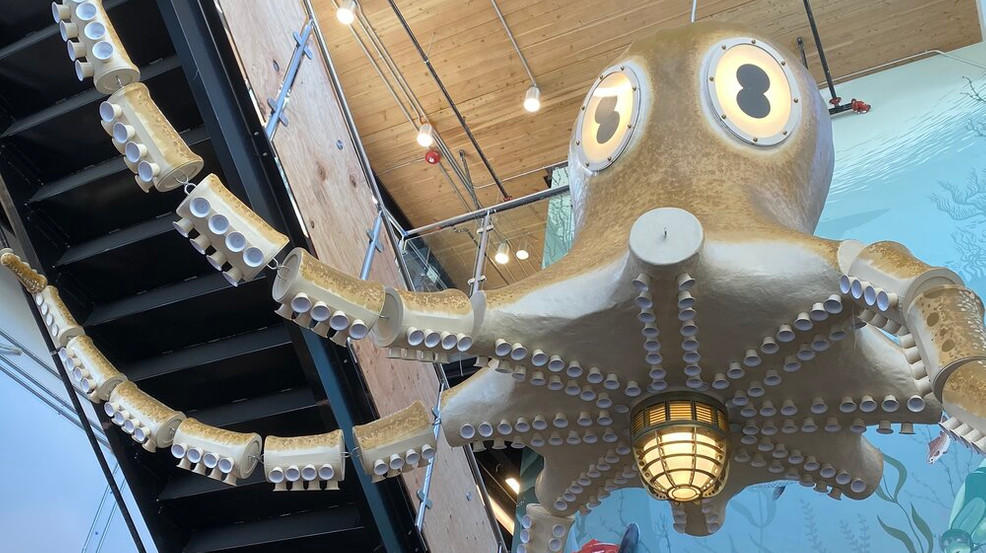 Kyler Martz may have grown up in Idaho, but even at a young age he was drawn to the coast.

"I have all these notebooks of stuff my mom sent me that I've drawn," said Martz. "I was always into the ocean. I wasn't from here, but I don't think I'll ever leave the Northwest."

Martz is an artist, which is to say he's a tattooist, illustrator and muralist. His work is often inspired by nautical themes or the natural beauty of the region he now calls home.

If you take a walk around Seattle it's a good bet you'll spot some of Martz's work. It graces restaurant, hotels, office buildings, even grocery stores. One of his favorite projects is the massive octopus installation in the lobby of the Ballard PCC. But, the project that started it all was the one he did for award-winning chef Renee Erickson at The Whale Wins.

"That mural basically changed my life in that it was the first real mural I had ever done," he said. "I had no idea what to charge. At the time I was like 'I'll just fake it until I make it'. I'm sure [Renee and her team] were very quickly aware that I had no idea what I was doing, but they let me have at it."

While the murals are for the masses, tattoos are a decidedly more intimate experience.

"You get to see their initial reaction to seeing [the tattoo] and how stoked they are. So, just about every tattoo I do is that meaningful," he said.

Martz got into tattoo the traditional way, an apprenticeship, and spent 6-12 months learning and mopping floors before he ever picked up a needle. Now, several years and countless tattoos later, he still savors the chance to create those uniquely personal pieces.

"It's never lost on me. It lasts forever in one way, but it can only last as long as somebody lives, so it's pretty cool int hat way too," Martz told me. "[A tattoo] can't really be bought or sold. Once somebody has it, they can't really pawn it or lose it. They just take it with them."

Now, Martz is working on a new project, one he thinks could be just as rewarding as tattoos, a children's book.

"We didn't watch a lot of TV or movies at my house growing up. We didn't have cable TV or anything and we would go to the library every single week. I would spend hours and hours going through [the books]. It had a huge effect on me," recalled Martz. "So, after making a whole bunch of tattoos and murals and stuff that looks like it could be pages from a kids book I figured I should probably just make one."

Martz is working on some original stories, but his first book is a tribute to his late grandfather. It's based on an old song he used to play on guitar, Big Rock Candy Mountain.

"I would love for [the book] to be something that maybe helps inform a younger generation. They get inspired by these images and want to make their own thing like I did. That would be pretty cool if that was the outcome."

You can see more of Martz's work online.