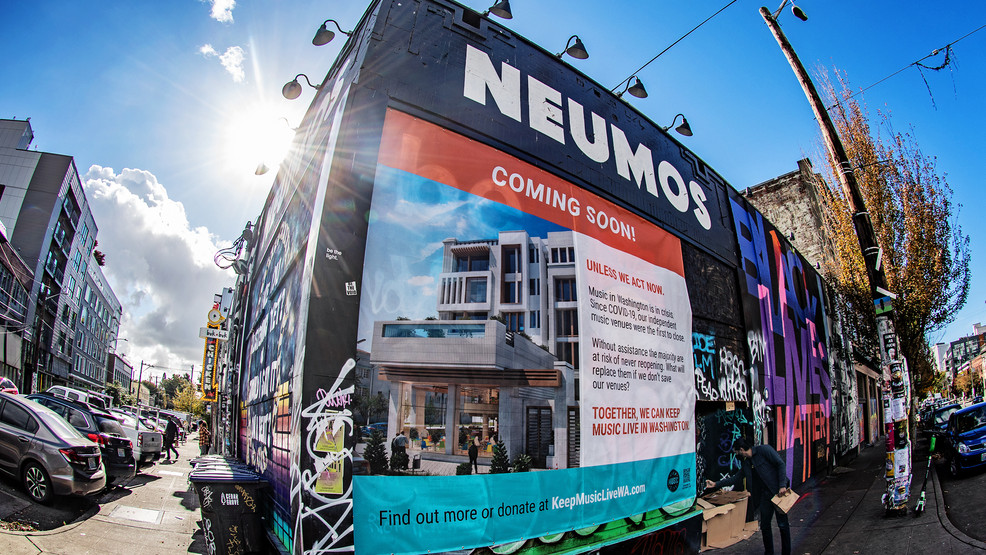 Keep Music Live WA fights for the future of our venues

Manny Cawaling, Keep Music Live Board President and Executive Director for Inspire Washington, reflects on those days early in the pandemic when venues learned they might have to limit venue capacity to 250 or 500 patrons, an option that seemed unfathomable at that time.

Now, many months later, music venues have had to accept the sobering fact that they were among the first businesses to close —and will likely be among the last to open.

The places we gather for community and creativity are at great risk of disappearing forever, and music lovers around Washington have come together to ensure that doesn't happen. Keep Music Live is a COVID-19 relief fund for small, independently-owned venues across the state focusing on smaller spaces (less than 1,000 guests, some far smaller).

They've set a lofty goal of raising $10 million in critical funds, something they say will require not only community support and donations but also public support on county, city, state and federal levels.

A survey of 51 King County music venues showed that in the first few months of closure, 2,100 events were canceled, 650 staff were laid off and 17,000 musicians’ paid gigs were canceled.

Cawaling, an artist himself, says he sorely misses exploring ideas and creativity with others, clapping together and soaring on that feeling of connection. From the high numbers of prior attendance and engagement, he has a good hunch that fellow Washingtonians care about these spaces that bring us together as much as he does.

“I’m an artist,” he said. “I really feel creative programming taps into something so profoundly human. Right now we’ve been really pulled in and under, overwhelmed by the COVID pandemic, politics, ideologies around health."

Yet this is a moment of reckoning, Cawaling believes — and there is no better time than in the midst of crisis to hold on to (and fight for) what we value most.

“Let’s take a moment to remember who we were — and who we ultimately are,” Cawaling says. “Who do we want to be? What do we care about when we come out of this?” He urges folks to think about places they still want to exist when we emerge from this tunnel — whether that is a favorite music venue, museum, local artist, etc.

He explains the impossible challenges faced by live music venues right now, like having to hold spaces open even when they’re not able to generate revenue. These businesses still have to pay rent, annual insurance, electric bills and other expenses which he calls “monstrous on a scale none of us can imagine.” While nonprofits have a history of donations and philanthropy, these venues are not used to having to ask for help. At present, there's simply no other option.

At the end of 2020, it is predicted that cultural organizations will lose some $150 million, and next year will likely be worse. Cawaling emphasizes that what's at stake is the identity of our community. He worries about the vitality of this area; if artists are out of work, he wonders, what will stop them from moving home or to more affordable towns?

“We could lose a whole generation of creative people unless we give them a glimmer of hope,” he said. We need to instill confidence in artists that venues will still be here when we come out of this on the other side.

Although the response to the initiative has been great so far, Cawaling admits it’s been a gamble having to invest upfront in advertising and social media initiatives to reach their raising goal.

“Over the next month, we really need to see a bunch of donors step forward,” he says. “We need to see momentum.”

Cawaling hopes to be a cheerleader in reassuring people: “We can do this.” He encourages others to give whatever they can afford, even if that means $5. He offers three ways we can help: Donate money; amplify the issue (share, talk about it); lastly, if you have the bandwidth and time, get involved and volunteer.

Eva Walker, a Keep Music Live board member, KEXP DJ, and guitarist and vocalist for The Black Tones, adds her two cents.

“Small venues are crucial for bands and artists, especially starting out," she said. "It’s where they hone their skill, get to realize their skill, and get live feedback from the crowd. Artists need small venues to learn and grow – these small, independent venues have given me so much as an artist and music lover, we must help protect them for future musicians.”

"Music venues were the first to close, and we’ll likely be among the last to be able to reopen," adds Steven Severin, co-owner of Neumos. "Over these seven months, live music venues have been empty but the rent, insurance, licenses, and other costs continue while we wait until we can safely reopen. Losing these community gathering spaces and stages for artists would have a devastating effect on the greater music ecosystem: from the loss of artist, touring crew, and venue staff livelihoods to the economic multiplier effect on area businesses.”

"How do we come out stronger and better?" Cawaling does believe this is possible; we have the opportunity to profoundly change our culture and identity — by honing in on what matters most.