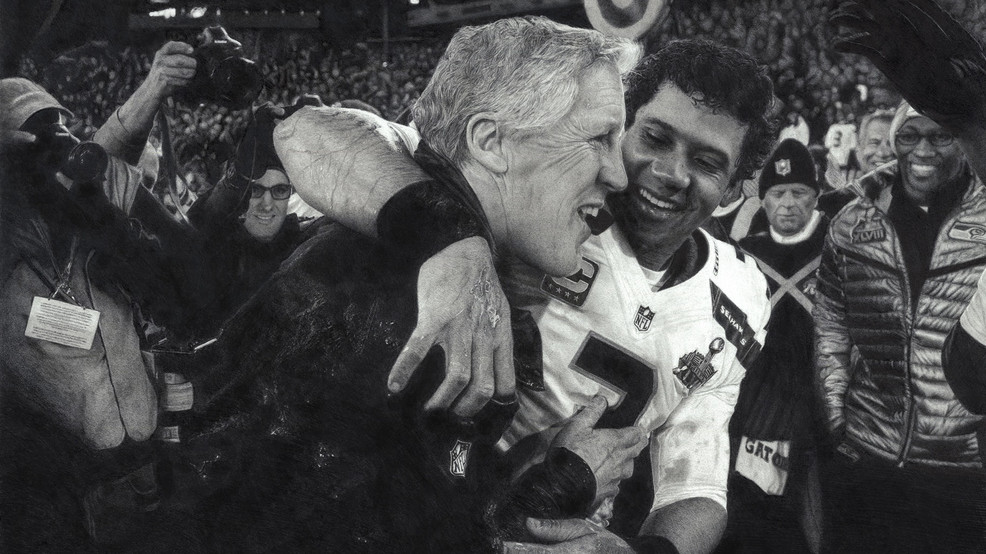 Artist Keegan Hall has drawn on his talent to give $425,000 to charity

The detail and definition are stunning. There's jubilation in the smiles of Pete Carroll and Russell Wilson, contemplation in the eyes of Ken Griffey Jr. and determination in the stances of Jewell Lloyd and Sue Bird.

"I like to typically work from a number of different photographs as references and ultimately create my own composition," said artist Keegan Hall.

They may look like snapshots, but they're drawings, created by Hall. While the prolific artist makes his art precise and linear, his personal life has been anything but.

He's been creating as long as he can remember.

"I grew up doing art. My biggest fan was definitely mom. She always praised my art even my really terrible drawings," said Hall. "I was always such a shy kid. She was amazing. Almost the opposite of what I was growing up."

"I have one sibling, her name is Joanna, and and she has cerebral palsy. My mom was always one of the Special Olympics coaches," he said. "When I was a kid actually she was the head coach of one of my baseball teams. I think she was the only female head coach in our entire league. I got to see her as this tough strong woman who’d get things done."

He majored in art at UW, but decided against pursing his passion.

"Upon graduation, I started to listen to everyone around me telling me, you know, you’re not good enough, it’s not a real career, you’re going to be poor your whole life," said Hall. "The dream of being an artist in an art world was no longer a reality for me."

He built a career and a family.

"Everything was going great until that one fateful day where I got the news that my mom had cancer. She did the chemo and radiation and came out successful on the other side and was cancer free."

After years in remission, heartbreaking news.

"It kind of came charging back," said Hall. "She started to not feel very good on a Friday, and ended up going into the hospital on Saturday and passed away on Sunday. It basically rocked me to my core."

Losing his mom led him to reflect and reevaluate.

"I kind of kept going back to my time creating art and how much kind of joy that brought her. For some reason I just sat down one day and drew a picture of something I hadn’t done in for the last 10 years. I thought I’d start with a picture of Michael Jordan."

He posted it on social media.

"I just remember lots of positive comments going back. One of my friends was just like ‘Hey that was a really cool drawing’ can you create a drawing for me of Kam Chancellor? I started a picture of Kam and posted that picture on social media - and Kam actually saw that and he shared that drawing on his social media."

Then - something happened that changed Hall's life forever. Chancellor reached out to him directly.

"I was doing a picture of Kam Chancellor FOR Kam Chancellor, which was pretty wild. Before I knew it, I had this audience - or at least a lot of eyeballs seeing my work."

"I was always in the back of my mind thinking that I’d use my art to help others. My wife actually coined the name, it was called the 'Keegan 200'. The idea was, I’ll do a drawing, I’ll create 200 prints of that drawing and then an athlete and I will sign all 200 and I’ll sell it for two hundred dollars."

He partnered on a project with then Seahawk Richard Sherman. The drawings sold out on the first day!

"[It] raised $40,000 like that - and then I donated all of it to charity. And I was like 'Oh man - here we go!' This is something special I think. So Sherman was the first guy to kind of give me a chance to prove that a charity model would work."

"Not too long after that I did a campaign with Macklemore and Ryan Lewis. Obviously Russell Wilson and I did a big one. In a separate campaign, Russell, Ciara and I did a whole library card project. The Sounders Jordan Morris had a big one, Gary Payton, Michael Jordan, Michael Bennett, Jermaine Kearse. It just kind of goes on and on and on."

Although he's donated an impressive amount of money to charily, Hall literally 'spreads the wealth.' He gives the choice of where the funds go to the athlete or entertainer. And the total is jaw dropping. "Now we’re up to close to $425,000 in the last few years."

Using the simple tools of pencil and paper, and spending up to 80 hours on a piece - Hall has drawn some of the most famous people in the world. But there's still one band on his wishlist.

"I would love to work with Pearl Jam. [I'm a] big fan of theirs, and they do a ton a charity work."

What would his mom think of what he's doing now?

"She would just be ecstatic and on cloud nine not only seeing me follow this new path of art that I always wanted to do as kid but also see the impact that it’s made in the community with people local, nationally and even internationally inspiring them to kind of follow their passion."