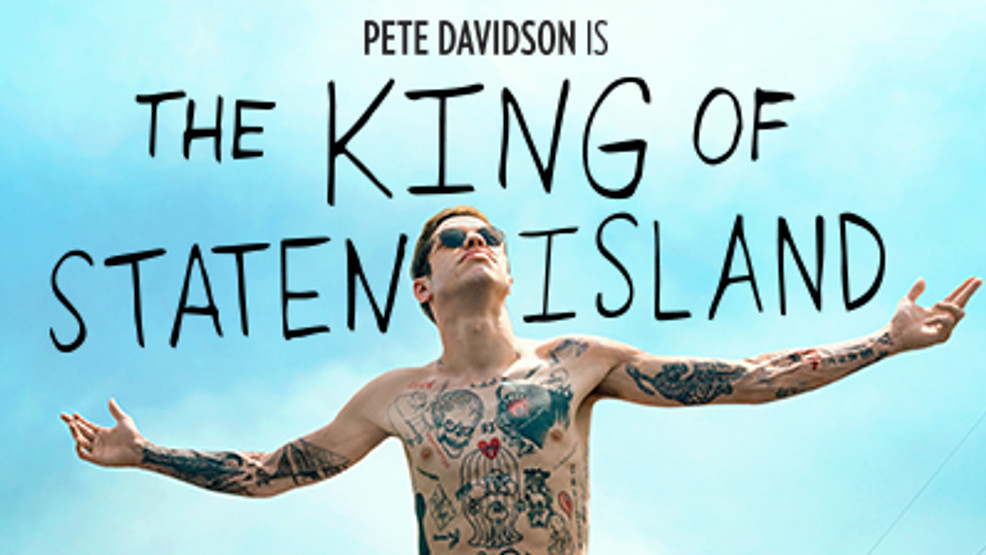 Judd Apatow talks 'The King of Staten Island', raising kids with a sense of humor

It's fair to call Judd Apatow a comedic genius - all one needs to do is look at his IMDB page. A prolific writer, director and producer (who also occasionally does stand-up comedy on the side), Apatow helped shepherd modern day classics like "Knocked Up", "Superbad" and "The 40-Year-Old Virgin" to the big screen. His latest, The King of Staten Island, had its theatrical release thwarted by coronavirus. Instead, it arrives on-demand, on June 12th.

"Saturday Night Live's" Pete Davidson stars as Scott, a 20-something, still living at home, chasing the dream of becoming a tattoo artist, yet unable to confront the grief of losing his firefighter father as a child. Heartfelt and hilarious, the "King of Staten Island" features a loaded supporting cast including Marisa Tomei as Scott's mom, Margie, and Bill Burr as Ray, a loudmouth firefighter.

The story may be fictional, but it is based largely on Davidson's life and experiences, including the death of his dad, a firefighter, on 9/11. In addition to directing, Apatow co-wrote the film with Davidson and Davidson's best friend, Dave Sirus. I had the chance to talk to Apatow about the film, and the origins of his collaboration with Davidson.

Seattle Refined: I know you’ve told this story before, but how did you and Pete Davidson first meet and decide that you wanted to collaborate?
Judd Apatow: We worked on "Trainwreck". Amy Schumer recommended him immediately, and then Bill Hader recommended him to "Saturday Night Live" off of that. So, that was a big moment for Pete. And then for a few years we’ve been kicking around some ideas. And then slowly we started tiptoeing towards the idea of doing the one about the elephant in the room, do we want to talk about the real stuff? And he got very passionate about trying to make a great movie that was a bit of a tribute to his mom and his father.

How do you approach that from a collaboration standpoint? Because this is such a personal story for Pete and he’s sharing his story, now, with the world. How do you approach that in a way that’s true to the story, but, at the same time, knowing you’re going to have it seen by a broad audience?
Very slowly. We work on it very slowly. We talk about what we want to say, what the point of it is and possible paths to get there. I worked with, for a long time, Garry Shandling and he was all about blurring the lines with reality and fiction. That’s what the Larry Sanders show was. And I think that’s what "Girls" was with Lena Dunham. I learned a lot working with Lena, who is always so open with her life and all her issues, and she knew how to make them funny. And then I feel like we did that with Amy Schumer, Kumail Nanjiani. And it’s my favorite kind of movie. It’s like "Diner". You know Barry Levinson’s "Diner" was maybe the first time I saw a movie that I understood to be about someone’s childhood turned into fiction.

I just listened to an interview with Jason Segel and he said that when he was writing "Forgetting Sarah Marshall", you told him to write [the first draft] as a drama. And I’m wondering if you took a similar approach with "The King of Staten Island"? Because this movie is hilarious, but it’s also very affecting and there’s a lot of dramatic elements in it.
That’s usually my approach. I feel like when comedies go wrong it’s usually because there’s a comedic premise and then they made it a movie and maybe tried to jam some emotion into it. I feel like you have to start with the dramatic premise, even if it’s a funny one and make it work, and then find the humor in it. So, that is the best way to go. Even "Airplane", a very serious story, there was stakes there.

Pete and Bill Burr, who is phenomenal in "The King of Staten Island", both have that standup comedy background. Is there something about doing standup that lends itself then to creating a three-dimensional character in film, like both Pete and Bill did in this movie?
I think with standup comedians, first of all they’re always interesting people. Anyone who does it usually has stories to tell, has some emotional damage, things they want to heal and explore. And they’re used to talking about it and turning it into something funny and something you would care about. So, they’re built for it. I think comedians are generally very good actors and actresses. They’re just comfortable with themselves.

Finally, for me, since my wife and I are about to welcome our first daughter, I know your daughter, Maude, is in this film [playing Scott's sister, Claire]. Your other daughter has done some acting, and I just want to know as a parent, how did you and your wife [actress Leslie Mann] encourage that sense of creativity and that sense of humor in your kids? Because I think it’s something, I personally am going to try to do with my little one when she arrives.
I think they’re just around it a lot. We talk about it like, a cobbler’s kid tends to be a cobbler. It’s just thing we talk about all day long, how do you turn life into art, into some sort of expression. And then it is a gift you give people, the gift of your story and imagination. It is a noble thing to do with your life. I always say the good thing about being in comedy is when something bad happens, it’s not just bad, it’s also a great story. So, you’re not that bummed, you’re like ‘wow, that person really hurt me, but I think that’s going to be a pretty funny story at one point’.