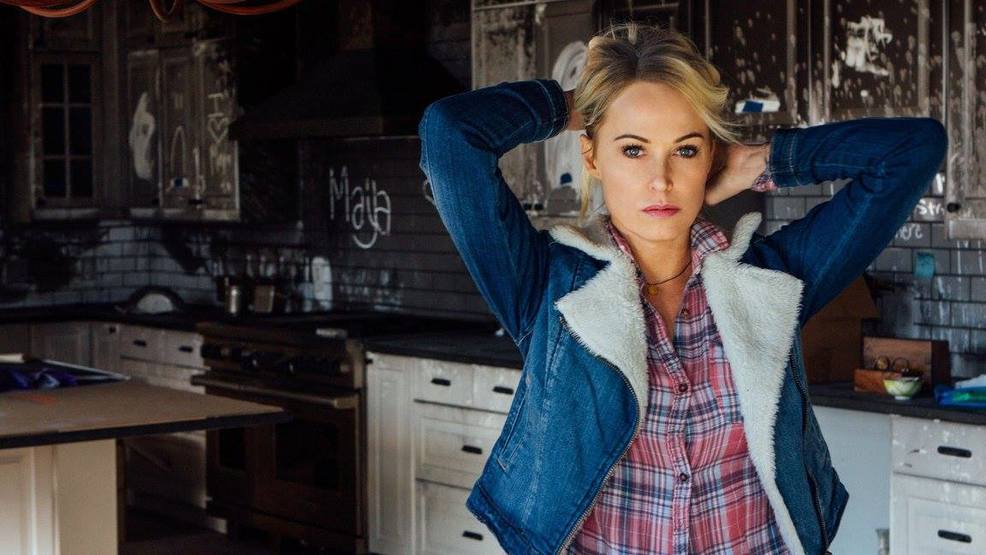 Hanging out with actress Josie Bissett in her kitchen feels like you're gabbing with your best girlfriend. It's easy to forget that her home on Lake Sammammish is a million miles away from where she first made her mark on the evening soap "Melrose Place".

The opening credits showed a bunch of impossibly attractive twenty-somethings walking arm in arm down that famous street in Los Angeles - one of them was Bissett.

"I was so young and just kind of getting into the business. I remember walking down Melrose and really having no clue what it was going to turn into," Bissett remembers.

What it turned into was a cultural phenomenon. The twisty plots and captivating characters of Melrose Place made it must-see TV in the 1990's. Everyone loved Bissett's character, Jane Andrews Mancini - in part because she seemed so nice while the other characters did not.

"There were times where I felt I wish I got to play someone a little more bitchy or edgy," said Bissett. "In the end I'm so glad that I played Jane and was the girl next door cause that's really just who I am at heart."

Jane was mostly well-behaved, but that doesn't mean there were a few cat fights, especially when it came to clashes with on screen sister, Sydney. One famous scene involved a time where Sydney stole their Grandmother's wedding dress from Jane's closet and put it on. It was a classic catfight.

"We had it in one take then I jumped in the pool and so we had to get it thank God we did," Bissett smiles.

By the time Josie Bissett landed that star-making role, this Federal Way native had already been modeling and acting for years. She grew up in a close-knit and supportive family.

"I moved to LA when I was seventeen, eighteen - and began started out modeling and started TV movies," said Bissett. "Actually commercials were what I did first, because I did not have any aspirations to be an actor."

Her plan was to go to college and study design, but before that could happen, "Everything just sort of started to fall into place."

She found success early on, playing Cara in the sitcom The Hogan Family.

"I think that if it didn't happen within a certain amount of time I would have switched careers because it's a tough path," she said. "It's a really tough path to be an actor. It's a lot of rejection."

Bissett played a straight-laced person who was not necessarily the funny one, but turned out to be funny because she was so straight-laced and clueless.

"I loved it - to me, sitcoms are the most normal show to have to have a normal family, a normal life."

Family has always been her top priority. She was pregnant with first her child when Melrose Place went off the air. So Bissett decided to pick up a pen and add author to your resume.

"The show ended, I had Mason four months later, and was just like 'Oh I need something to do while they sleep all day' so that's when I started writing."

Her first two books were "Making Memories" and "Little Bits of Wisdom."

The fact that she hadn't written before didn't daunt her. She's penned four books including the award-winning "Tickle Monster", all while being a single mom of two and in-demand actress.

These days, Josie Bissett is co-starring in "The Wedding March" movie series on the Hallmark Channel with her former Melrose Place castmate Jack Wagner. Here's a twist - the two rarely crossed paths in those days.

"We don't really know each other, we're on the same show and here we are doing this series of movies together," she laughs. "We have so much fun. We have such a good time together. It's like a it's kind of like a long-lost brother because we have this trust in eachother."

Bissett plays Olivia Pershing who reconnects with her college boyfriend years later - when she's just about to marry another man. She relishes her role.

"So I'm finally playing a romantic comedy-type character and it's the most like me that I've ever played."

It may seem like this hometown girl is living a charmed life, but three years ago she almost lost it all, in a catastrophic house fire than reduced her home to rubble.

It was just another morning in the summer of 2014, and Bissett was working from her home on Lake Sammamish - when he life changed in an instant.

"I remember thinking that day - 'It's such a beautiful day, I'm so lucky to be working in my bed looking out at this incredible view,'" said Bissett. "Then I heard this sound - it was like a high-pitched popping weird sound."

Bissett had a friend over at the time, who was downstairs screaming her name.

"I ran down, and there was just this massive explosion right outside the kitchen on my deck. The barbecue had exploded."

The flames had traveled quickly from the deck, up to their bedroom attic, and all the way across to her daughter's room.

"It's just so powerful when you're in it," said Bissett. "It's just so scary to be in a situation like that and you have no control - watching everything burn."

Luckily, everyone escaped, and the firefighters were able to put out the flames.

"I just couldn't believe my eyes," she remembers. "I think it felt like a dream."

The flames ravaged Bissett's home, completely gutting it. In the bedroom where she had been earlier that morning, the ceiling had completely collapsed. Walking through the rubble afterwards was both horrible, and heartbreaking.

"Just seeing everything damaged and burnt and wet and all spread out all over the floor and gone," she said. "It's just - I can't even describe it. Ut's a like a weird violation. It's like a violation of your life and everything that you had."

The scary experience had the actress counting her blessings.

But now she faced the monumental task of rebuilding.

"I think the most emotional thing about the house fire is just picking up the pieces," she said. "There were times when just getting out of bed - it was hard. I just was like, this is so much to handle. It's just empty and at the same time, you're a parent - and so I had to put the kids first."

With the support of family, friends and her own personal determination - Bissett powered through.

"This is the kind of thing, floods and fires, that you never think will happen to you. The aftermath of it can be an absolute nightmare."

After major reconstruction of the house, Bissett moved back in this past summer. But out of that tragedy - just like a storyline from one of the Hallmark movies she stars in - something magical emerged. From the embers of the fire...Bissett found love.

"We got set up on a blind date," said Thomas Doig, Bissett's husband. "One of my old colleagues lived in the same complex JOsie was put in after the house fire. So the silver lining is always there."

"If the house fire hadn't happened, I wouldn't have met you," said Bissett.

The couple met, got engaged and married all within a year.

"He's just such a lovely man," she beams. "Just so down-to-earth and caring - and is an incredible father."

Doig and Bissett tied the know at Delille Cellars this past summer, and blended their families. Between them they have an 18-year-old, 15-year-old, 9-year-old, 8-year-old and 6-year-old. Phew!

The glamorous couple also share a surprising passion - flipping houses! They bought a house in Ballard about five weeks ago, and they have to have it turned around within the next six or seven weeks.

"It's so much fun!" said Bissett. "The demo part is the best, just letting loose."

"Josie swings a great hammer," laughs Doig. "Josie's very creative. I've been in construction all my life so I'm trying to deliver on Josie's ideas. We compliment eachother well."

This down-to-earth celebrity really does do it all - with lots of laughter and loads of grace and grit.

"If you kind of hang out with me, you just - things happen," she laughs. "Good things, horrible things like the fire, unpredictable things - so there's never a dull moment. There's always change, and I'm open to it."

Bissett just signed a deal to do three more "Wedding March" movies for the Hallmark Channel - and get this; she's also developing a home improvement show.