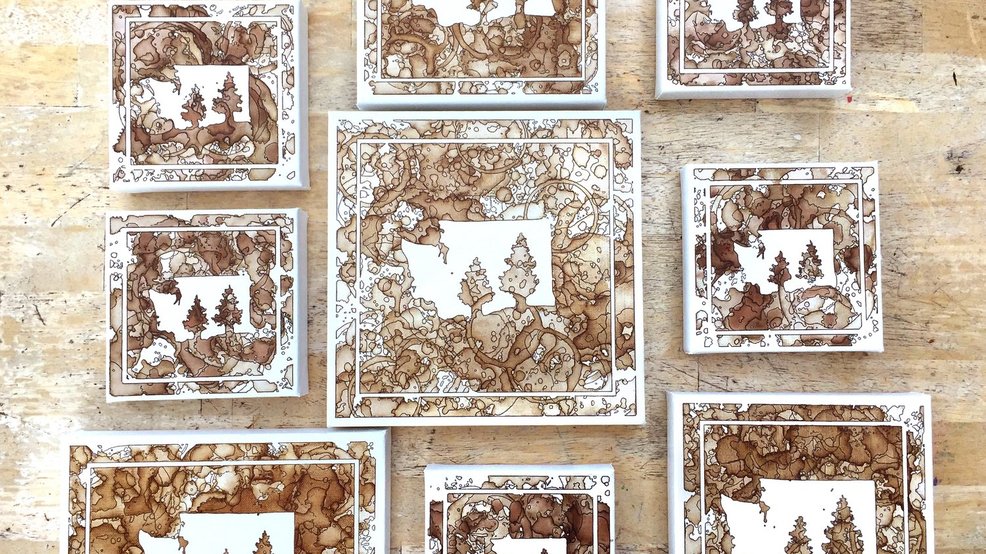 Jon Norquist is a Major in the Army, a father of five, an engineer and a coffee artist. He creates his amazing work one splatter and spill at a time from his home near Tacoma. Jon's business, aptly titled Coffee on Canvas, has been growing by leaps and bounds including his original art, and work for corporate clients. Image: Coffee on Canvas
SEE MORE

The subjects are wide-ranging, from 'Mangia' - an ode to eating - to majestic mountains. and even a woman wearing a glamorous gown.

The themes may be different but the medium is the same.

For artist Jon Norquist - there's no use crying over spilled coffee, when you can create with it! He uses it in place of paint to make art.

So how much coffee has he used or abused?

"Some people think it is abuse," said Norquist laughing. "When people say that I tell them 'It's decaf - don't worry.'"

A graduate of West Point and a Major in the U.S. Army, Norquist is an engineer by trade.

"Over the course of my military career, [I] went a couple times to Iraq and everywhere else," he said. "I was always very creative but the military is not the greatest place to explore your creativity."

The father of five had a packed schedule, and between trying to deal with his job, kids and everything else - he started getting creative, with how to get creative.

Making a 'pot of joe' with a coffeemaker that always dripped was part of his morning routine.

"Every time you pour, it spills," he said. Then an idea began percolating. "One day, I was spilling coffee and realized - 'Oh wow, that's really great abstract art!'"

Norquist brewed up a business called Coffee on Canvas from his home near Tacoma. His art is an homage to living in the northwest: skiing, biking, climbing, and inspirational messages. And that's just the beginning. Soon big companies were hiring him to make coffee art for them.

While we were there, we got to experience the making of one of his masterpieces in person. After drawing the design, Norquist uses his own secret formula to mask off the areas he doesn't want java to drip. Once it has dried, it's time to spill the beans! Coffee beans, that it.

"So I just literally give it a little swirl as I pull it out, it sprays coffee everywhere, place it on the canvas and that is art to me!"

He knows when he has something when he sees the balance between the stains and the negative space.

"I'm always looking for that balance," he said. "Looking for gradients of that coffee, dark brown against lighter browns - that kind of thing."

Finally - Norquist removes the mask and outlines all the splatters and spills with black ink.

"It is honestly sort of like Japanese gardening to me ," he said. "Where you have chaos and what have you - and then when you're outlining everything it kind of puts it in nice little boxes."

The finished art is good to the last drop! Norquist hopes people drink in the idea of seeing the beauty in spilled coffee...

"Whether it's creative, whether it's optimism whatever it is - it's just a great way for me to show that, you know what, there's positivity in everything. It's all a matter of perspective."