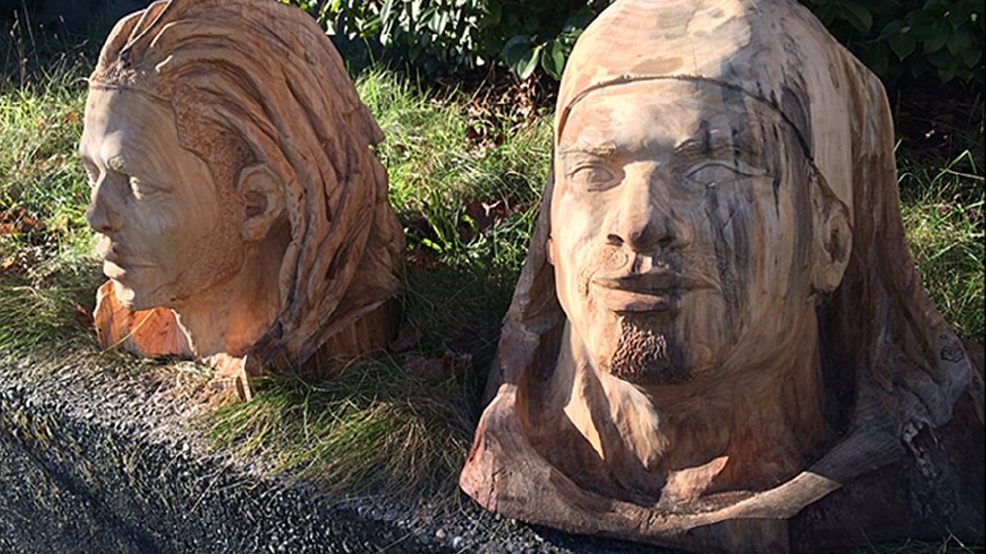 In Case You Missed It on KOMONews.com earlier this week: As the Seahawks sharpen their talons for next week's playoff game, a local artist is sharpening his blade in tribute.
SEE MORE

In Case You Missed It on KOMONews.com earlier this week:

As the Seahawks sharpen their talons for next week's playoff game, a local artist is sharpening his blade in tribute.

Thomas Earing, a chainsaw carver, has decided to chisel the busts of five well-known Seahawks players out of large, old trees. Each sculpture takes about 30 hours of carving, sanding, and chiseling, he said, before being oiled and finished.

"It gives a tree a new look. People will look at this tree now, whereas before it just stood on the street corner," Earing said, as he tapped away at a two-foot tall mold of safety Kam Chancellor. "They were city trees in Seattle."

The Ballard-based artist has been carving with a chainsaw for 12 years, crafting totem poles, animals, and even a giant Batman. Much of his lumber is recycled from trees that fall down in stormy weather or are removed by homeowners in landscaping projects, he said.

Earing was recently inspired to go 'Beast Mode' on bark after watching the Seahawks rise to fame and win the Super Bowl.

"(The players) are superheroes -- the modern day gladiator. Might as well appreciate them," Earing said. "It's not just the team. It's the city itself that's supporting the team. If you've got the backing of millions of people in the Puget Sound, amazing things happen."

People walking down 15th Ave. NW in Ballard may hear the sound of Earing's chainsaw on many days. On Wednesday, large busts of Russell Wilson, Marshawn Lynch, and Richard Sherman faced the bustling Ballard roadway. Earl Thomas sat in the shadow of the narrow walkway nearby.

Earing hopes to sell his work or auction it off for charity. Each bust takes about 30 hours to complete.

"It's not just the team. It's the city itself that's supporting the team," said the Colorado native and one-time Broncos fan. "Home is in your city -- but home is also with your team."