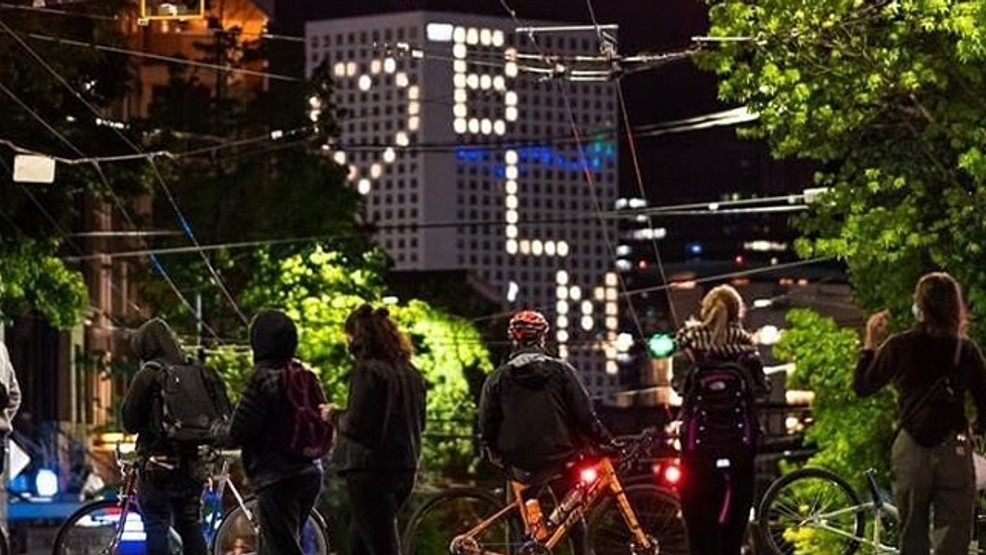 When Hyatt Regency Seattle first lit up its rooms in the shape of a heart, social media was buzzing with people sharing photos and videos, most of them accompanied by #WeGotThisSeattle or #SeattleStrong.

"During these unprecedented times, we hoped it would serve as encouragement and spark joy for our local community," said Tom Wolf, the managing director for Seattle Hyatt Collection. "Especially to those on the frontlines of the COVID-19 pandemic."

The heart still lights up the skyline months later, sending that same message of love and unity. Wolf said the heart is a representation of Hyatt's purpose, "to care for people so they can be their best." Responses came from close to home, and afar, he said, of people thankful for this message.

Since then, Hyatt Regency Seattle has continued this trend — in addition to the heart — with other messages to the community. The letters "BLM" appeared on the other side of the building next to the heart when Black Lives Matter protests started in early June, and the word "Kraken" lit up another side in late July when Seattle's new NHL team made its debut.

"The Black Lives Matter message was a collaborative effort with our ownership [...] and Hyatt to support a movement we feel passionate about," said Wolf. "The Kraken message was at the request of the team with whom we have a growing relationship. We have always enjoyed supporting all of our sports franchises, as we believe they add tremendous emotional and economic value to our community."

Hyatt Regency Seattle even helped a couple get engaged in May. Wolf said they helped a local man propose to his girlfriend with an epic light display they could see from their apartment — she said yes!

For months, this hotel in downtown Seattle has been creating these light designs with their rooms — and it's all thanks to Carlos Aleman, the hotel's director of engineering, and his small but mighty team. Wolf said when they land on a design, this team puts in whatever amount of time and energy is needed to make it come to life.

Right now, there aren't any specific plans for future designs (but never say never). Wolf said they've had a lot of fun with this and plan to continue using it as a way to lift spirits while the hotel is temporarily suspending normal operations.

And the hearts? They aren't going anywhere anytime soon.

"We will plan to leave the hearts up for the foreseeable future," said Wolf. "We believe it's such a powerful message for us and the community as we work through these unprecedented times."