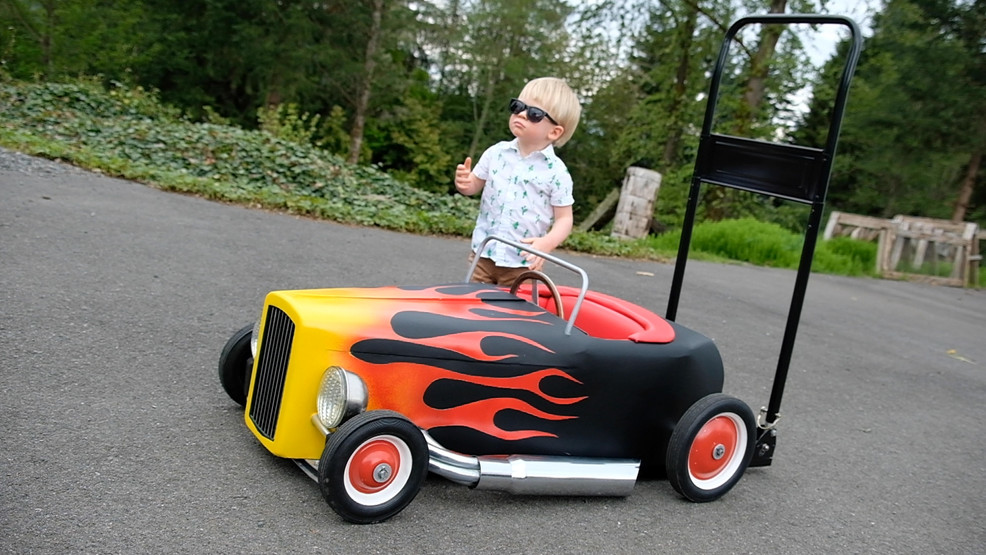 Confessions of a Car Guy: I Spent a Year Making My Son a Hot Rod Stroller

I'm a car nut, and this ride may be smaller than most, but it means a lot to me because I share it with my son.

It's a hot rod inspired stroller.

The idea for this souped-up stroller came about before my son was even born. I wanted to make something that he and I could enjoy together and throw myself into a project that would get me in the mindset of becoming a father. It worked for me and so far my son loves it too! Also, if you're going to be pushing a stroller around a car show, it might as well look cool.

This was not a kit.

This stroller took a year to build and is mostly made from stuff my father-in-law had laying around in his garage. He helped me make it along with my dad. This stroller started as a scratch-built wood frame, was wrapped in sheet metal, shaped, sanded and then finished in a classic matte black, red and yellow flame job. Is it a Ridler Award winning paint job?

But, it has custom chrome headers, real headlights, custom gauges, an engine-turned aluminum dashboard and a pretty sweet diamond-pleat seat, sewn and pattered by my dad (he does custom car interiors for a living). This tiny hot rod looks great going down the road and people don't hesitate to let us know as we cruise by. I think my son knows that he's a lucky kid (I know I'm a lucky guy to have a great son like him) to have a cool toy that was hand-crafted by his dad and grandfathers.

At the request of my wife, I shared a fifteen second video of my son's stroller on Tik Tok. Its a social media app that's real popular with people younger and cooler than me. Somehow, the video did very well and I now have thousands of followers on the platform. If you'd like to see that 15 second story or other videos I've uploaded, find me on Tik Tok. My handle is "grandpamillenial," thank my wife and her friends for that.

See you on the internet.