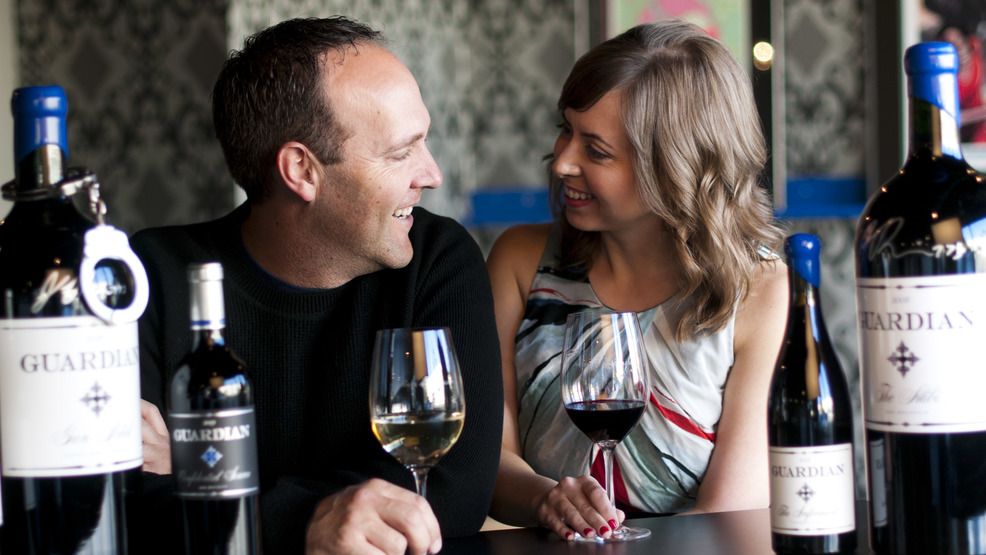 Guardian Cellars: A Cop and a Reporter's Perfectly Blended Life

Business is booming at Guardian Cellars in Woodinville. Winemaker Jerry Riener sniffs and sips his way through the barrels, making sure every drop of wine is pure perfection.

"It's delicious," he says. "It's like a summer cobbler where you've got all this sweet fruit, you've got the spices from the barrel."

But how Reiner got to this place is a little bit of a 'wine-ding' road.

"Everybody has a little side project in the wine business, it seems like," he explains. "Mine's a little different than some of the others in that I've been a police officer for 21 years now. I was a chemist turned cop turned winemaker."

In fact, in 2003, Jerry Reiner was a detective in the Lynnwood Police Department when crime reporter Jennifer Sullivan contacted him about a case.

"I met her - we did not get along," he recalls. "It was not love at first sight; in fact we couldn't stand each-other in the beginning. Sullivan agrees.

"You know there was a level of distrust," she said, "And being a crime reporter - I'd done this since the age of 19 - at this point I knew exactly what I was dealing with."

But the two still respected each other even when they didn't necessarily agree. Over time, the two even became friends and then something more.

"There was a lot of sort of back and forth and we both realized this could be something more," said Sullivan. "But we went out for drinks in Fremont one night and we talked for five or six hours, closed down the bar and at the end of the night were like 'Wow, this could actually work.'"

But could these classic adversaries become a couple? Wine not?!? Turns out they had more in common then they'd realized: both gone to University of Washington, both from big families.

"It wasn't about police officer and reporter," said Sullivan. "It was about Jerry and Jennifer."

Next thing they knew, they had fallen in love and built a thriving but hectic side business.

"Jerry and I definitely have a triple life," said Sullivan. "So for the two of us we were able to work our jobs Monday through Friday, [and then] come to the winery Saturday & Sunday. We work seven days a week, we did that for years."

Soon after they were married, they realized they wanted a family. Now, two kids later - juggling jobs, the winery and kids can make things a bit tricky. But not even Merlot and motherhood keeps Sullivan from excelling at her first passion - journalism.

"I've been a newspaper reporter the bulk of my career," she said. "I transitioned to TV (KOMO News) almost two and a half years ago, and it's been so much fun. I'd like to say that I've been able to compartmentalize but I'll be pouring wine, I'll be here on a Saturday and if somebody calls about a crime I'll step off the floor and I'll work on that."

The decor at Guardian Cellars is a nod to the couple's other jobs. So are the names of the wine: 'The Informant' is a Syrah blend, 'Chalkline' is a table wine, 'The Wanted' is a Bordeaux blend, 'Gunmetal' the first wine they made, and then Sullivan's own 'Newsprint'.

Customers can taste the love in every glass.

"I don't know how they do it!" said Erica Patterson, visiting Guardian on the day we filmed there. "They have two kids, they're both still working full-time and it's like 'How do you guys manage a winery?'"

So how do the cop and the reporter still find time to drink it all in - despite these busy days?

"If I could answer that question for Jerry," Sullivan chimes in, "It's that sometimes our house is not as clean as we need it to be. Sometimes we don't have the healthiest groceries in the fridge, sometimes our kid's hair doesn't get brushed when they go to school. There are things that definitely fall off the tracks but we do make it all work."

"It's just such a fun blend of our lives," says Sullivan with a grin.