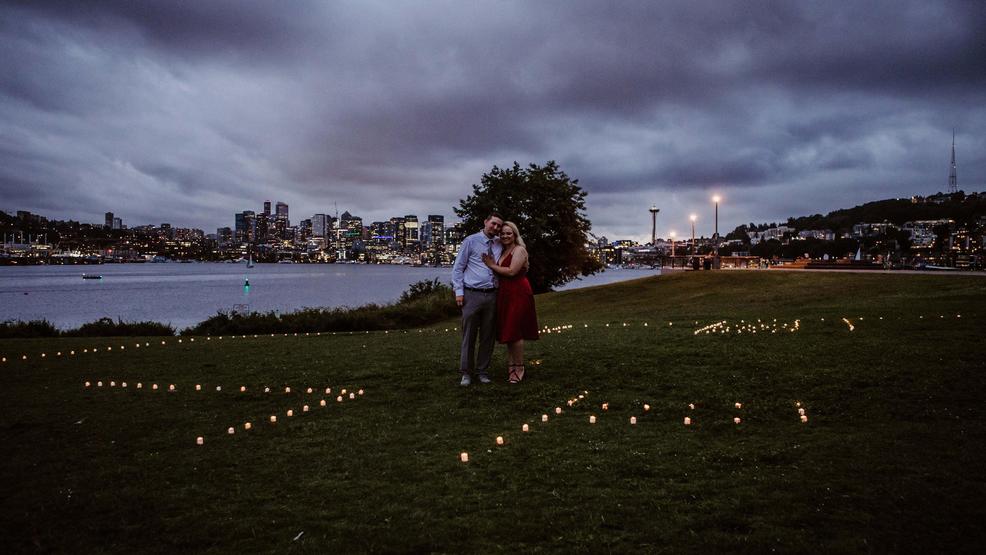 Joshua Green and Hannah Pettijohn are huge "Grey's Anatomy" fans, so when Josh decided to propose, he knew he wanted to incorporate the show. With the help of local photographer Christi Hunt, they recreated the iconic 'candle house' scene from the hit ABC series. (Image: Christi Hunt Photography)
SEE MORE

Hannah Pettijohn has been a fan of ABC's hit medical drama, "Grey's Anatomy" for as long as she can remember.

"I remember my parents watching it live when I was little," she said. "[And] I started rewatching on Netflix my freshman year of college."

The Kansas City resident loves the show for the same reasons many of us do: the characters, the drama, the plot lines that we so easily fall into.

"It's an all-in-one," said Pettijohn. "It’s a drama, it has humor, it has thrill, it has romance. I love Grey's because it’s so well written that you feel as if you have friends in the show."

Another plus? So many episodes to bingewatch on Netflix, which came in handy when Pettijohn began dating her boyfriend Joshua Green.

"I had given him my Netflix password when we first started dating and he noticed I was rewatching from the beginning and he asked if we could rewatch together," she said. "We would hang out and just watch Grey's, or call each other on the phone to just watch Grey’s."

The couple has been together for three years, and even named their son Avery, after a character in the show. So when Green decided to propose, he knew it would be important to incorporate their favorite show in somehow.

"About two years ago after Avery was born, we were re-watching and she mentioned that the candle house was her favorite scene," he said. "I knew then [that was] exactly what I wanted to do for her."

Grey's Anatomy fans know exactly what she's talking about when she says the "candle house scene". The star couple of the show, Meredith Grey (Ellen Pompeo) and Derek Shepherd (Patrick Dempsey) had been going through a rough patch, and to show her love and support - Meredith "builds" Derek their dream house in a park in Seattle, made entirely of candles. It's easily one of the sweetest, most iconic moments of the entire series.

But even though Green saved the moment in his mind, Pettijohn didn't really think about it again.

"I did say [once] that it would be cool to get engaged on a ferry after watching Alex and Jo’s wedding," she said, referencing the recent marriage of another couple on the show. "[But] after three years I just wanted him to propose in any way!"

Green began the preparations, unbeknownst to Pettijohn, almost two years in advance. He knew he wanted to do it in Seattle, to stay true to the theme, and planned a trip for the family for June 2019. Pettijohn just thought it would be a fun vacation, but Green was in full-blown planning mode.

"Being from Kansas City I had to get things ready from afar," he said. "I contacted swap-and-shops, and that’s where I found Christi Hunt, our photographer, and she helped me with everything from calling the park all the way to setting it up that night."

Hunt, a Kitsap County portrait photographer who is also a fan of the show, loved the idea.

"I thought it was incredibly romantic and so thoughtful to incorporate her favorite show," she said.

Idea? Check? Photographer/Teammate? Check check. Now it was time to get into the details.

"We researched the best possible location to host something of this magnitude," said Hunt. "The actual location [from the show] is quite a hike for a sunset venture, so with his plan to take her to dinner and be dressed nicely, that was definitely not an option. Josh suggested Gas Works Park, so I visited to check it out and found the beautiful spot we ended up using with the Seattle skyline in the background."

Being out of town, Green trusted Hunt with the planning and execution.

"[It] was a huge honor for me," she said. "Josh didn't see anything until he walked up and just trusted me to pull everything together the way we had planned. For someone, states away, to put their trust in you on one of the most important days of their life is incredible."

And while all this planning was going on, Pettijohn remained blissfully unaware. She thought Green may use the Seattle trip as an opportunity to propose, but she has no idea exactly how or when.

"I really thought he was going to propose at dinner," she said of one night on their trip when Green encouraged her to get dress up for a reservation he'd made. "He had made such a big deal about the dinner that once it didn’t happen [the proposal] I was so annoyed! He casually mentioned wanting to walk to a park that's close by, and I really didn’t think anything about it. Maybe he just wanted to see the skyline - was my thought. I was clueless."

Green, on the other hand, was figuratively (and maybe literally) sweating bullets. Everything that could go wrong in the lead-up, seemed to. The key to the plan was getting to Gas Works Park by 8:40 p.m., when Hunt said she'd have the candles set up and ready to go. That meant Green had to find a dinner spot, with a coveted weekday night slot open, in a walkable distance from that park.

"I lied to her about where our dinner was and it wasn’t until that morning I even found a restaurant close to Gas Works Park," said Green. "I had to hide the ring in a safe at the hotel, and getting it there and retrieving it that night was hard because I needed to be away from her for it."

"I couldn’t tie my tie and so I asked the man at the front desk to help me and thankfully he was able to retrieve the ring for me then too," he said. "After putting it in my pocket I realized that you could see the box from a mile away - so I had to stuff my pocket with my portable charger and wallet so she didn’t see."

After all that, it was only 8 p.m. when they finished dinner. Green had forty more minutes to kill before they could head to the park. Thankfully, he found a nearby bar - which bought him time, and served as way to calm his nerves. Finally, it was time to head to the park.

"I blindfolded her at the front of the park and just told her to trust me," he said. "We walked what seemed like forever - I didn’t know where Christi set up exactly, so we both were walking in a little blind. I saw [the candles] and our song played as we walked through."

Hands getting clammy, body starting to shake - Green took out the ring, the Post-It note (another nod to a seminal scene from Grey's), and took off the blindfold.

"Once I took the blindfold off, I was just was so overwhelmed that I didn’t put it together very quickly," said Pettijohn. "Once I had figured out it was the house of candles - I knew what was happening."

Green started reading off the Post-It.

"All of the feelings of love and support and our life together so far just flooded my mind," she said. "I’m so lucky to have found him. I was so honored that he was choosing me to be his wife and that he knew me so well that not only was he recreating my favorite show, but down to my favorite scene. I couldn’t wait to say yes."

The rest is history! Green got down on one knew, asked her to marry him, and she said yes! The couple is happily engaged and looking at an October 2020 wedding. Check out all the photos in the gallery to see the incredible moment photographer (and planner!) Hunt caught.