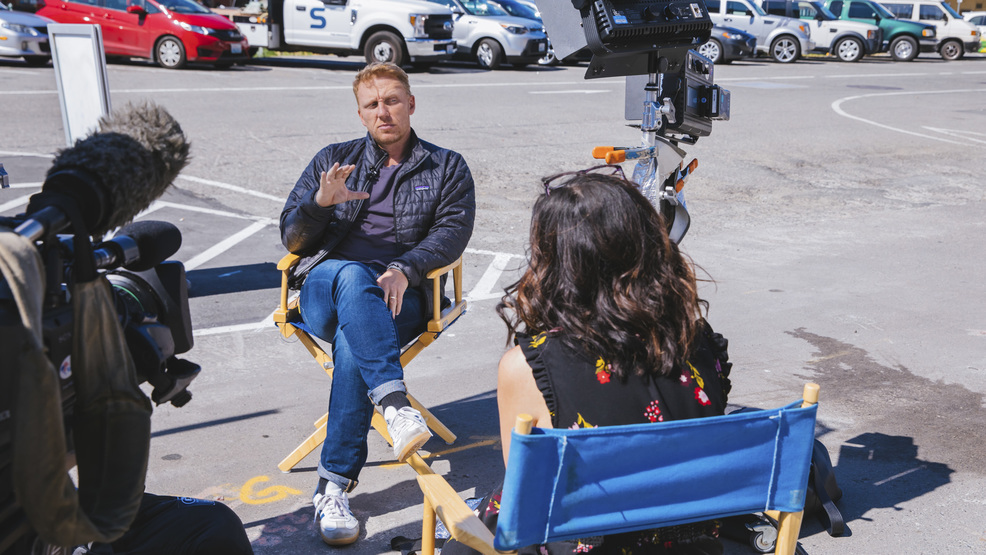 It's one of the longest running shows in the biz, and it's based in Seattle! You know, you probably love it - it's "Grey's Anatomy". The medical drama comes to town once a year to shoot scenes up here (the rest is shot in Los Angeles), and as the ABC affiliate station in town we were lucky enough to grab interviews with some of the cast like Kevin McKidd (Owen Hunt), Jake Borelli (Levi Schmitt, aka Glasses) and Giacomo Gianniotti (Andrew Deluca). The cast was in town for just a few short days, shooting scene on the waterfront, at a Starbucks and some other secret locations we won't see until the new season airs Sept. 26, 2019 on KOMO 4. (Image: Sunita Martini / Seattle Refined)
SEE MORE

When Grey's Anatomy fans last got a glimpse of Dr. Owen Hunt, he was confessing his feelings to fellow doc and former flame, Teddy, as she gave birth to their baby girl.

But when we caught up with actor Kevin McKidd on location, he had hung up his scrubs to direct scenes for the show's brand new 16th season, airing tonight at 8 p.m. on KOMO 4.

"I pinch myself everyday being able to work in Hollywood, from the islands of Scotland," said McKidd. "To direct and get to be on TV and be on this show, I feel very lucky and I've worked hard for it. I feel very, very fortunate."

The cast has been in studio for the past nine months.

"We just have our heads down, making sure we get everything right, so it's nice to poke your head out of the studio and come to places like Seattle and see that this show is really loved by a lot of people. It's a blessing," said McKidd.

For the past 11 years, McKidd has been portraying Dr. Owen Hunt and let's just say his love life has been code red complicated.

"He's been yearning to have a baby for a long, long time, Owen, but kind of got what he wanted. Not quite in the package that he imagined," said McKidd. "Now, him and Teddy are together again and that's been a long time coming. I think he has a lot of feelings towards Amelia and she does too towards him so, I feel like it's going to be very interesting to see where it all leads."

Owen and Amelia, or as fans have dubbed them, "O-Melia" have been romantically involved since season 11.

"Is it going to be Owen and Amelia that will end up together or will it be Owen and Teddy? I genuinely don't know and I don't know if the writers know [either]," said McKidd. "I understand the upset. What I say is as long as I get to do scenes with Caterina, because I love working with her and I love working with Kim Raver too. I don't mind as much if they're together or apart, as long as we get to have those scenes, because having those two women as my acting partners is amazing and I love them both."

He may be caught between two lovers now, but his character originally came to Grey's Sloan Memorial Hospital for someone else.

"Cristina Yang is the reason Owen Hunt came to the show," said McKidd.

The fan favorite was played by actress Sandra Oh for nine years.

"I've really been lucky and Sandra is the OG. Owen and Cristina are the OG couple," said McKidd.

As season 16 starts, we asked the actor to spill some secrets about what to expect, especially after the end of last season where characters were fired.

"Three main characters got fired and you would expect them all to get hired really quickly and that doesn't necessairly happen and it's very interesting to see how all that plays out," said McKidd. "Also for my character, I don't know if I should say this, [but] he and Koracick have had this sort of...they don't particularly like each other and Koracick gets a little more power in the hospital [this season]. So that's interesting [to see] how it shakes out."

It's also fun for McKidd to see how Owen Hunt grows and changes over the seasons.

"Every character you play, you want to see an arc or a journey and he's come from this very damaged human being, who has mental scars from being in the wars and has healed those things. [He's] healed a lot of those traumas from his past and is looking to his future," said McKidd. "I'm really pleased about the story we've been telling with Owen Hunt and every day I get to play him, I learn more about him, about myself, about life, and that's great."

Between acting and directing, McKidd is still an actor at heart.

"I love acting still. Acting is my first love and I think, and I joke when I say this, I'm going to keep acting until I'm too old to do it, then I'm going to fully go into directing." said McKidd.

"TV shows can become repetitive and that's why people stop watching them and I think we keep it fresh," said McKidd. A lot of romance, not just a little, a lot of romance and that's the big thing with the show. It's great, you know, the struggled between men and women and how do we relate. And not just men and women! We're telling amazing stories in every kind of couple, mix that you could possibly put together."

So how does this medical drama still send hearts racing after all these years?

"I think that's why the show sustains is because we mix it. It's serious, it's heartfelt, it's fun, it's warm hearted. It's the biggest blessing in my life and long, long may it continue," said McKidd.

And then there are the newbies. They're smart, sexy and sweet and fans say, they look pretty incredible in their scrubs! These two hunky heart throbs may be newbies in the Grey's Anatomy galazy, but they're making a big impact with their juicy and sometimes jaw dropping story lines.

"I play Dr. Levi Schmitt, he's one of the newer interns in the last couple of years. He's super bumbly and fumbly and just trying really hard. He's an earnest guy and he's getting a lot better at his job," said Jake Borelli.

Borelli's character may be better known by his nickname: Glasses.

"A lot of people call him 'Glasses' because on his first day of the hospital while he was still touring, he leaned into Dr. Karev's surgery and his glasses fell off into a body cavity and totally ruined the whole surgery," said Borelli.

But thanks to his romance with fellow doctor, Nico Kim, he's also a trail blazer.

"It's been coined "Schmico" which I think is adorable," said Borelli. It's the first gay male relationship on the show between doctors which is ground breaking and something super awesome for me as a queer actor myself."

Last season, Borelli's character came out publicly, and so did he!

"It was sort of the next step in my own coming out process. You know as a queer person you kind of have a relationship to your coming out for your whole entire life. I was out to all my friends and family and have been for a while," said Borelli. "With Grey's, I have this new platform of people that I can speak to through Instagram everyday. And it was important for me to let them know that they weren't alone."

He shared the news via social media.

"I did it on set, actually," said Borelli. I posted my coming out post and I was sitting in my trailer. All of the sudden hundreds and hundreds of comments started pouring in and I was terrified up until that point and then I realized, 'you know what? It's okay'. It was mind blowing to me. I was flooded with love."

Speaking of love, the actor spilled the tea on what the future for "Schmico" might be.

"At the end of last season, it was a little shaky, you know. We had a lot of fights going on and it was a little rocky and then I think Nico really learned a lot from Levi," said Borelli. "Now we're going strong and I just can't wait for season 16 to see what happens."

Borelli is also having a blast being on location in Seattle.

"I’ve never been to Seattle so even getting to visit the city is really cool. And then this character that I’ve been playing for the past 2, 2 1/2 years is from here so I’ve kind of done my homework. It's a whole other thing to actually see where he grew up, and what he might do. I went out to Capitol Hill ya know, he does that with Nico I’m sure. Yeah it’s been really cool to sort of walk in his footsteps," said Borelli.

Another cast member we've been swooning over - Giacoma Gianniotti. It may not be his first time in Seattle, but he still thinks it's stunning.

"I love this city so much, it's so beautiful," said Gianniotti.

"I think he's smart. He's ambitious, he's driven. He has his values and he's not easily overturned. If he believes in something, he'll put up a fight and I like that and relate to it," he said.

His current love interest is Dr. Meredith Grey herself. She even used the "L" word at the end of season 15, the first time since her hubby, Dr. Derek Shepherd aka McDreamy, died.

"I think in a very broad way the last season was spent sort of aligning the stars for these two lovers to be together," said Gianniotti. "Now that they are, what does that look like? What are the challenges that present themselves when you finally do say 'I love you' to each other? In a way, that's sort of the easy part. The hard part is getting past the 'I love you' and being a partner and going through those day to day things."

So what's in store for DeLuca?

"In season 16, we pick up right where we left off. There’s a lot in limbo. We’ve had a bad fog, our big doctors [were] fired due to this big medical insurance scandal. DeLuca’s in prison and he’s taking the fall for Meredith. Meredith is desperately trying to find a way to right this wrong," said Gianniotti.

Sounds like there will be more twists, turns, hook-ups and break-ups ahead. In other words, the usual prescription for romance, drama and fun on Grey's Anatomy.