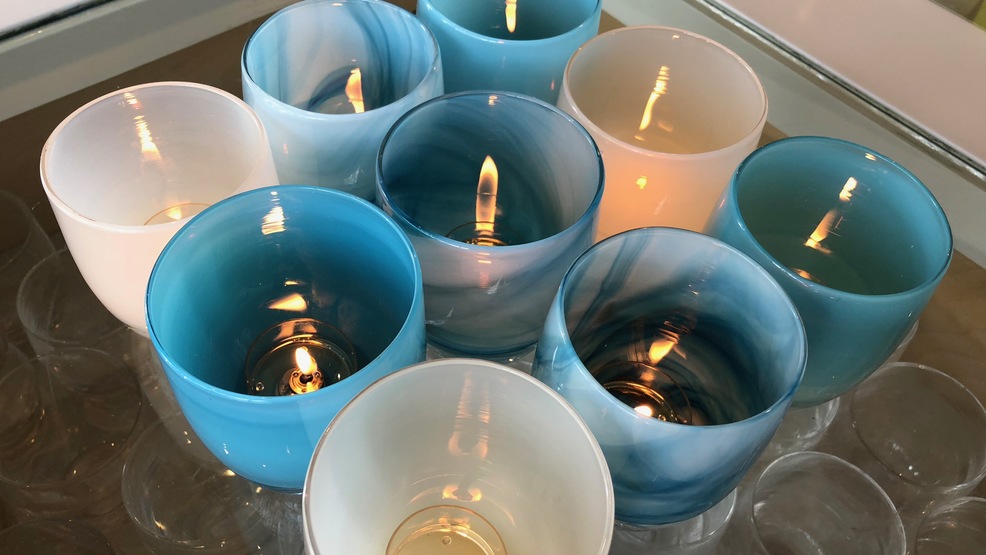 "We give 10 percent of revenue back," said Rhodes. "We're about to give our 10 millionth dollar away. We give money to help people, animals and the planet heal and we really do. We write the big checks." (Image: Seattle Refined)
SEE MORE

A flame flickering in a glass votive. It may seem simple, but for Lee Rhodes - it was illuminating.

"It was an accident," Rhodes said. "I dropped a tea light into a hand blown vessel on my kitchen island and it lit up. I had three young children and had just been diagnosed with lung cancer, so it was a complicated time, but the discovery of the dancing light in the colored vessel changed everything."

In 1995 as she battled cancer, Rhodes realized some of her fellow patients also struggled to get their basic needs met.

"I was in the middle of chemotherapy rooms where some people couldn't finish their chemotherapy because they couldn't pay to park or they couldn't get a warm sandwich or they just couldn't get that support," she said. "And that was just an eye-opening experience for me at the same time that I discovered the candle in the light of the Glassybaby, I kind of thought there must be some way to marry the two together. That was the beginning of Glassybaby.

She wanted to find a way to lighten the load for others, and brighten lives.

"I had some made around Seattle that people would light for me, and then all of the sudden they were lighting them for their family and friends and then people were coming to my house at all hours to buy them out of my garage," she said. "Then we opened our glass-blowing facility on Greenlake, and then we went on Martha Stewart."

Thanks to a friends, glassybaby caught the eye of the domestic diva.

"My phone rang at Glassybaby and it was Martha calling to say 'I love these candles. I'm keeping them all. I'd love to have you on my show'" said Rhodes. "I went back and went on her show. I think it was the first show out of jail and it was hilarious and wonderful and it put us on the map! It took us 7 months to fulfill the orders."

"It's True White - really beautiful - like an alabaster," Rhodes explains. "Like the inside of a shell, and it's just incredibly healing."

But today, they offer tons of gorgeous colors. From the beginning, glassybaby has been about sharing the light - both literally and figuratively. Over the years they've worked with 900 nonprofits.

"We give 10 percent of revenue back," said Rhodes. "We're about to give our 10 millionth dollar away. We give money to help people, animals and the planet heal and we really do. We write the big checks."

People are drawn to them.

There are more than 400 different glassybaby so far, and Rhodes herself has named every one of them. Her favorite? Kindness.

She also loves A Million Bucks. "I think that name is incredible, and I love giving people a million bucks! And maybe Wise? I love Wise."

They're all made in one of two U.S. locations, including a hot shop in Seattle.

"When you touch and feel and hold a Glassybaby, you can really feel number one that it was handmade, and it was handmade with love," said Rhodes proudly.

From that spark of an idea, decades ago - Rhodes and her handblown glass business have helped countless people. And it's still *glowing* strong.

"We're selling a lifestyle, a way to slow down and appreciate people and things that you love," she said. "It can be five seconds or it can be 5 hours, it really doesn't matter.There's so much calm and tranquility and simple joy in lighting and putting a candle in color."