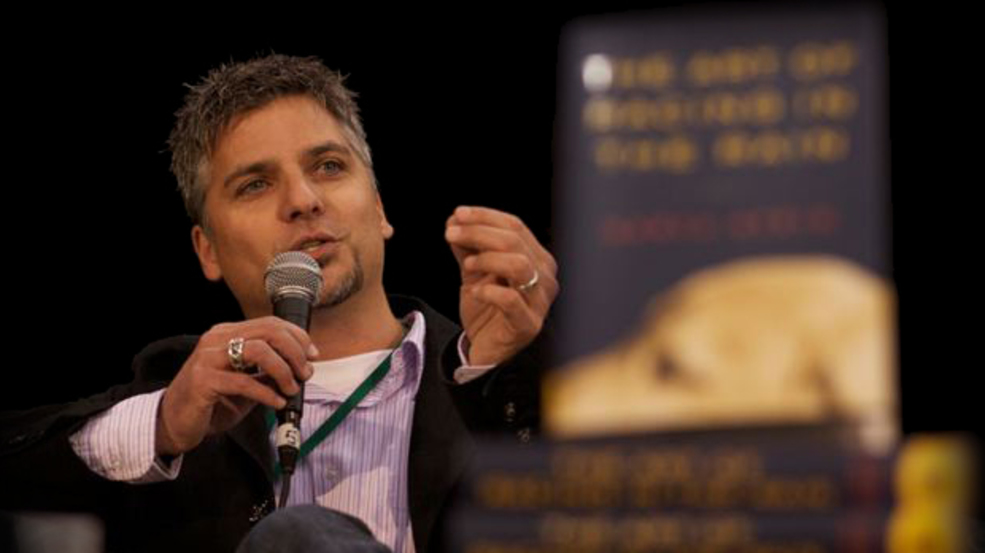 Garth Stein navigates every corner of the track with a sense of confidence, infused with fun.

He's as comfortable being behind the wheel as he is creating compelling characters. The author is a former amateur race car driver, the rush of the sport thrills him. We caught up with Stein at a place that's very meaningful to him: Pacific Raceways. For those familiar with Stein's massive hit, "The Art of Racing in the Rain", this is the track where main character Denny Swift races.

"It's where he really cut his teeth," said Stein. "He learned how to drive here - this is where he teaches with the fictionalized version of the ProFormance Racing School. This is like his home turf, he knows every little groove and every little seam on the pavement here. This is where he feels most comfortable."

"The Art of Racing in the Rain" is a story of love and loss. It's about Denny, his wife Eve and daughter Zoe. But the very human tale is narrated by Enzo - Denny's dog. The idea came from a series of coincidences.

"The first idea came from a documentary that I saw years and years ago about Mongolia and about dogs being reincarnated as people," said Stein. "And I thought that's a really good idea. Then I heard Billy Collins read a poem of his, called 'The Revenant,' told from doggie heaven."

As if on cue, we got a visit from the Pacific Raceways track dog - also named Enzo.

"The idea was - why not take this idea of a dog being reincarnated as a person and have this racing background to it, so that's where the track came in," he explained. "It was sort of a - I mean one can say it's random chance occurrence. [But] as a writer I believe everything happens for a reason, so it was kismet I guess. Fate brought me to racing then turned into this book."

Stein went to work - writing. But the path to getting it published was not an easy road.

"It was so weird to me when I finished the book and sent it off to my agent in New York, and he promptly said 'No one's gonna publish this book,'" said Stein. "From my agent. I got fired by my own agent. And I said 'Wait what do you mean? This is a good book!' He said 'No, no, no - it's a gimmick and it's not even a good one.'"

Stein's agent told him to throw the book away, and "go write me something I can sell." So he fired him. Months went by - then he finally found the right fit, and sent the book to a different agent.

"I went off to send him my query letter and he called me up two days later and he was crying," he said. "He said 'You have to let me do this book!' and so that became the beginning and then Enzo went to live for three and a half years on the New York Times Bestseller List."

The author is modest about his major success.

Soon after it was published - a twist - a superstar wanted to turn the book into a movie!

"This has been in the making for a long time," said Stein. "Years and years ago when the book first came out this little-known actor - I don't know if you've ever heard of him? Patrick Dempsey? He has this Seattle envy for some reason, I dunno. And he is a race car driver, quite quite good too. And he got involved, he optioned it."

Dempsey set it up at Universal - where it sat for nine years.

"I thought it was never gonna happen," he said. "I mean look, the mark of success for a book shouldn't be that it's made into a movie."

After nine years - another turn. In January 2018, Stein got a call.

"This guy is like, 'I'm going to be directing your film!"

It was Simon Curtis, who directed "My Week With Marilyn". He had actors on board like Milo Ventimiglia, Amanda Seyfried, and Kevin Costner doing the voice of Enzo.

"It was fun! They shot most of it in Vancouver," said Stein. "And they shot some here at Pacific Raceways."

Don Kitch Jr. is a character in the book, and in real life. He's the Chief Instructor at ProFormance Racing School. When Stein called him and shared his vision for the book - he was credulous to say the least.

"Well the whole concept - the dog narrates the whole story...I probably should have taken a direct deposit on that deal," laughed Kitch Jr. "But I watched it come along and it's been it's been a wonderful ride."

Stein is a prolific writer, authoring many other award-winning books from his work space in Georgetown - a testament to "Racing in the Rain's" epic popularity.

Enzo is also the focus of a series of illustrated children's books, but Stein's newest project features a very different animal.

"I'm really excited about this graphic novel that I'm doing," said Stein. "I'm working with a local illustrator named Matthew Sothwick, he is super talented and so I do the script and he does the drawings."

It's called "The Cloven" and it's about goat mutant people who live in the jungle right near Stein's office, underneath the freeway.

Also slated for 2019, the much-anticipated release of "The Art of Racing in the Rain" movie, a decade after the book was published - Enzo will be gracing the silver screen.

"I hope that they get the spirit of it right," said Stein. "I believe that they will, so I have faith in it. The idea of the bond between Enzo and Denny is important, the family bond - the family's the most important thing. The idea of dedicating oneself to something. The idea of creating one's own destiny that if you make the sacrifices and if you do the work you can achieve almost anything."

Back a the track, as gray clouds filled the sky - and the drops started falling, Enzo the dog's philosophy about the art of racing in the rain comes to mind.

"Balance, anticipation, patience," said Stein. "In racing they teach you if something happens on the track you can't worry about that. It's already happened, you can't change it."

Sounds a lot of like Stein's real life story.