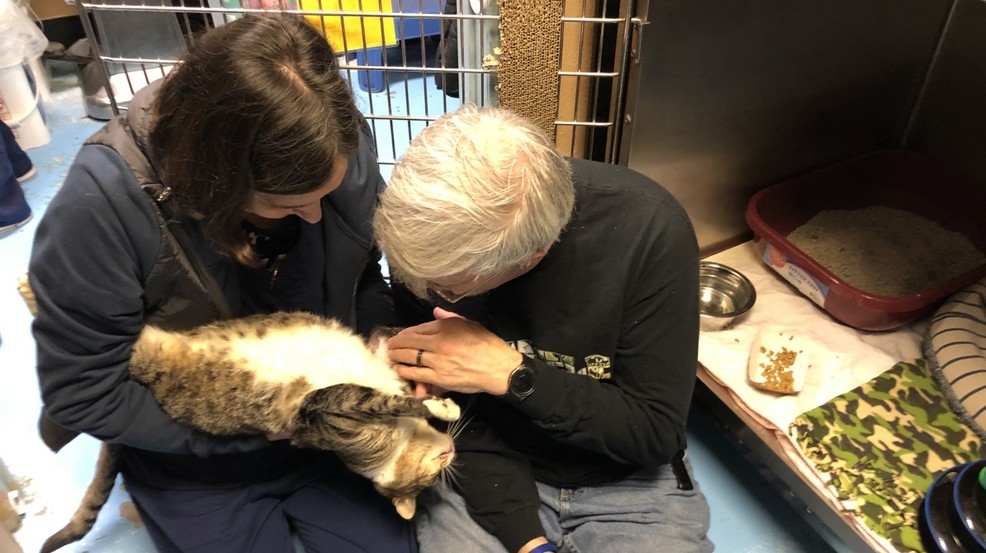 Gandalf, the longest kitty resident at Kitsap Humane, was finally adopted by his vet

Well if this isn't the heartwarming holiday news we all need right now!

Gandalf, a severely injured cat who spent more than two years at Kitsap Humane Society (longer than any shelter pet in their care), was adopted a few weeks ago by a volunteer veterinarian who helped him heal!

Back in 2017, Gandalf arrived at KHS with his collar embedded under his front armpit, which caused a deep and infected wound. The vets worked so hard to treat him, but even after several surgeries and antibiotics, the wound wouldn't completely heal.

“Gandalf came in to KHS in such critical shape and easily fell into our hearts right away,” said Director of Shelter Medicine, Dr. Jen Stonequist. “Despite his condition, he was so trusting and loving right from the start!”

It was later discovered that Gandalf suffered from an autoimmune disorder that caused his body to reject the healing tissue, making it almost impossible for his wound to close. Poor guy!

After becoming aware of his disorder, the KHS vet team administered steroid medication and asked for help from local vet, Dr. Charles Crawford - who not only provided laser therapy treatments, but developed a soft spot for the kitty in his heart.

Having recently undergone open heart surgery, Dr. Crawford empathized with Gandalf’s vulnerable state, and during their weekly sessions together, they became the best of buddies. Not only did he donate his medical expertise but he has now opened his house to Gandalf!

Congrats Gandalf, and happy holidays to you and your new family!