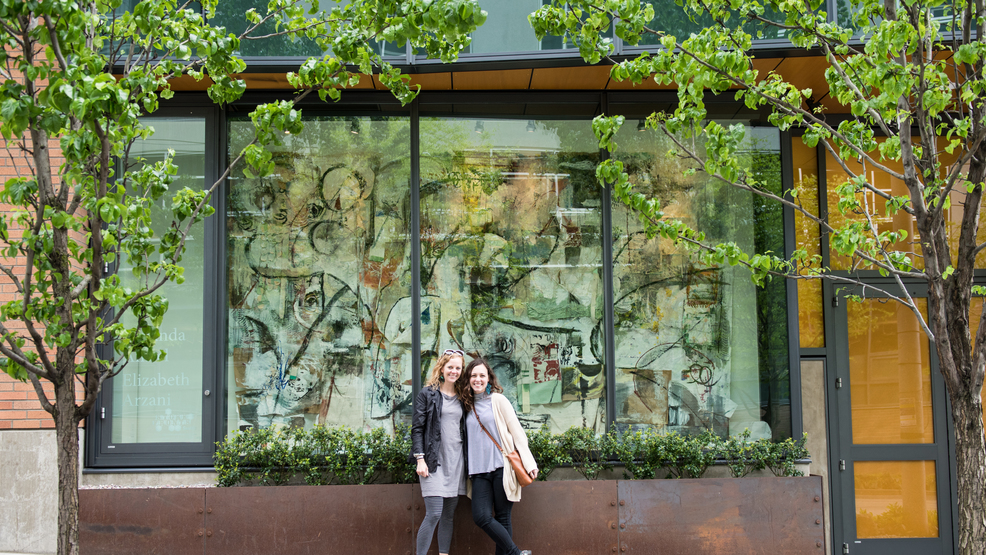 Harrison Storefront: Tiny Human Moments by artists Amanda Amsel and Elizabeth Arzani. A collaborative piece that explores the relationship between teachers and students. The artists worked simultaneously and observed student processes, reacting to them as well as each others. From the artists: We believe the most significant part of this piece is its emphasis on acting on your curiosity to explore and to seek out new experiences- learning new ways to make your mark. Not only were we observing students' processes in various stages of creating and artistic development and reacting to their responses to our teaching, but we were also reacting to one another's responses. (Image: Natalia Dotto
SEE MORE

Wander through South Lake Union, in between the Amazon offices and the restaurants and the food trucks, and you will find public art popping up all over the place. Some of it curated by Shunpike, a Seattle nonprofit organization that works with local independent artists.

The program began in 2010 when when Pioneer Square and the International District saw an increase in empty storefronts in their neighborhoods. Instead of leaving them empty, the neighborhood associations sought a way to create art in those spaces. Enter Shunpike and the Storefronts program began. Recent years have seen that bust turn to boom and there are fewer storefronts available.

Now Shunpike Storefronts has partnered with Amazon enabling them to fill eight vacant storefronts in the core of South Lake Union with art. Since 2013, Shunpike has put out a call for artists for installations in these eight spaces and two spaces in Bellevue. They showcase 28 artists throughout the year. The artwork is rotated ever four months in South Lake Union, and every six months in Bellevue.

“Not only were we observing students' processes in various stages of creating and artistic development and reacting to their responses to our teaching, but we were also reacting to one another's responses”, said Amsel.

Taking the leftover pieces of paper that are put down to protect their elementary school classroom tables, the pair photographed and copied the marks left behind by students. They used fabric and canvas, paper, oils, ink and charcoal. Their process was intuitive and they worked on the piece at the same time.

“Our installation is an exploration of the layers of learning from teacher to pupil and back again,” said Arzani.

Line Sandsmark is the Executive Director of Shunpike, and she says today with the boom in construction in Seattle the vacant storefront is not such a problem. In fact it’s quite the opposite - with with fewer spaces to display the artwork. Sandsmark says working with Amazon to have dedicated space for the artwork in South Lake Union has been such an asset. She’d like to see the program, which is a national model for other cities, expand to work with more partners throughout the Seattle, making creative use of new empty spaces.

“There is a huge need for artists to have space and show their work in the city,” she said.

For Amsel and Arzani the Storefront program supports local artists by giving the under represented, emerging artist a chance to exhibit their work with the community in a public space.

All of the Storefront pieces are on the corners of Terry and Boren at the cross streets of Mercer, Republican, Harrison, Thomas and John . To celebrate the works of all the artists there will be an artwalk around the storefronts on May 25th from 6pm-7pm. The starting point is at the corner of Mercer and Terry streets.