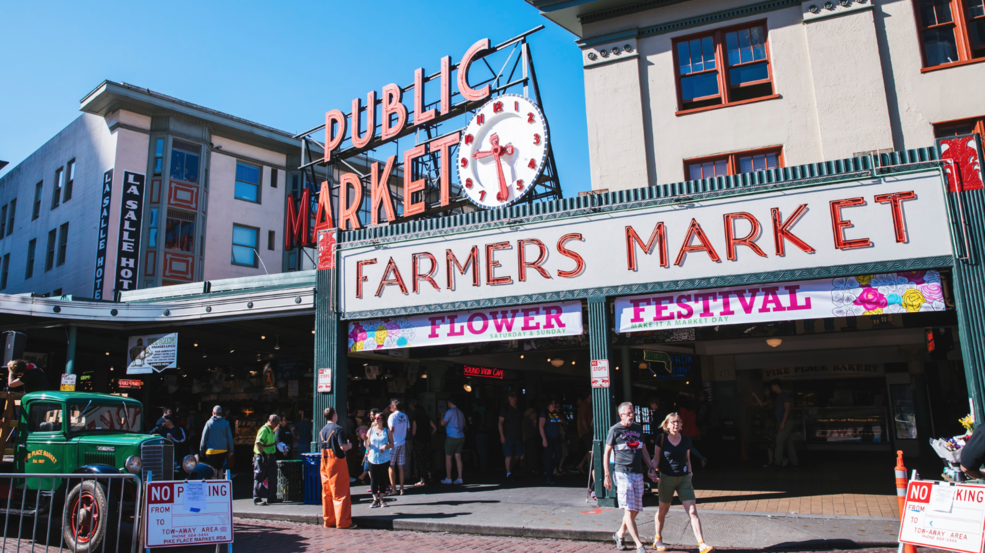 PSA: Don't try to drive through Pike Place Market on a weekend

Many Seattleites face the same decision when driving along 1st Avenue to Pike Place Market on the weekend. Do I dare turn into Pike and try to find parking on the main strip? And for reasons of ignorance and foolishness, many of us take the plunge, and then realize about 15 feet later that we've made a terrible mistake.

It's like being in the most chaotic, disorganized parade on the planet. You barely pass the fruit stand at the corner before waves of people flood around your car, crisscrossing in every direction imaginable. They seem to replicate like cells and you have the urge to put on your windshield wipers even though it's not raining.

Every mirror on your car is filled with people who are definitely closer than they appear. They walk in front of your car and roll underneath it and crawl through the back seat and you feel like at any moment the crowd is going to pick up your vehicle and heave it into Elliot Bay (and they'd be right to).

Strangely, the only person who seems to be unaware of the throngs of human beings is the driver in the car behind you, honking away endlessly like it's clear sailing ahead. You try to gesture to him as if to say, “The space in front of my car is filled with matter, specifically human beings, who would not take it well if I nudged them with my car.”

Twice drivers have actually gotten out of their car to express their frustration with me. The first time the driver walked up to my window and yelled “Go!”, then quickly disappeared back into his car before I could respond. The second time the guy banged on my window and made the mistake of sticking around, at which point I yelled at him with a torrent of salty language not fit for Seattle Refined. He scurried back to his car in silence. It's fun pretending to be tough sometimes.

While it's clearly a pedestrian market and should probably be closed to cars on the weekend, let's not let pedestrians completely off the hook. Don't forget that you were once in a car, and that I only desire to be outside of my car and on the cobblestone street eating a piroshky or a pork bun just like you.

Some sort of middle ground between never moving a lick in your car and scaring the hell out of the crowds with it has to be found. If driving, try to keep some sort of forward inching motion when you can to appease the angry drivers behind and remind the crowds that the giant, 2,000 pound metal object in front them is not a stationary art installation.

Don't obnoxiously honk if a group of people are just standing in front of you eating meat on stick or taking pictures of what is not technically the first Starbucks. Roll down the window and offer a kind “Hey, can you guys move a little? Thanks!” And they'll be happy to. It's a way better approach than putting a cowcatcher on your car and installing a horn that goes “Ahoooga!”

But the main thing is to do what the title says and not drive into Pike Place Market on the weekend. Park in one of the garages or on a side street, or take public transportation. If you must park at Pike, do so earlier in the morning on the weekend or even on a weekday morning when the market is the least crowded and at its most pleasant. Doing so will help you avoid becoming so stressed out that you abandon your car in traffic like REM’s “Everybody Hurts” video.

So remember, when you're driving by the corner of Pike and 1st, don't turn in and be the person that everybody shakes their head at in judgment. Park your vehicle where there aren't hundreds of people swarming around, and then enjoy your time at the market like I do, being the person pointing and laughing at the cars.