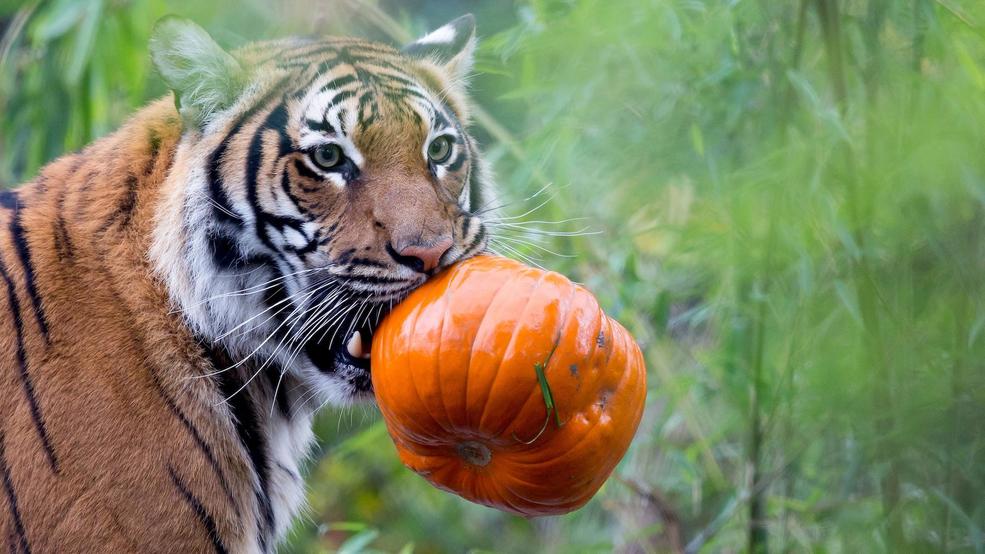 If you’re not yet in the Halloween spirit, it’s time to feast your eyes on this: the annual Pumpkin Bash at Woodland Park Zoo.

While ghosts, goblins, and witches will host many family-friendly events involving candy, a scavenger hunt, and a puppet show, you should definitely trick-or-treat yourself to watching your favorite zoo animals gobble, smash, and play with pumpkins and other autumn-themed treats.

Want a sneak peek of the gourd fun to come? Keep scrolling to fall in love with the zoo’s pumpkin-eating animals (lions, tigers, and bears to start!).

Psst! Don’t miss your chance to get tickets in advance. Buy tickets at www.zoo.org/pumpkinbash.

In the wild, female lions do 85 to 90 percent of the hunting for their prides—these big kitty cats eat anywhere from 11 to 15 pounds of meat per day! But the African lions at Woodland Park Zoo don’t have to travel far at all to feast on this special treat. Watch the zoo’s lions smash some pumpkins on Saturday, October 27 at 10 a.m.

We love these fur-ocious felines almost as much as they love eating pumpkins! Tigers are the largest cats in the whole world, and they do most of their hunting while we sleep—their night vision is up to SIX-times greater than ours. Good thing Woodland Park Zoo scheduled the tiger’s pumpkin treat for Sunday, October 28 at 10 a.m.!

Also known as brown bears, a grizzly prepares for winter by noshing on about 90 pounds of food each day. Their diet is dependent on what type of food they can find—so no judgment if you see mama bear gourd-ging herself on one too many pumpkin treats! It would be unbearable to miss this show on Saturday, October 27 at 11:30 a.m.

The maned wolf looks like a fox, is called a wolf, but is actually closely related to a bush dog from South America. These wild doggos are pretty healthy eaters, sticking to small mammals, fruits, and vegetables (mainly a tomato-like berry called lobeira), and when Halloween season rolls around, Jack-O-Lanterns. Spot Woodland Park Zoo’s maned wolves play with their pumpkins on Saturday, October 27 and Sunday, October 28 at 11 a.m.

The fluffy, wide-eyed, red ruffed lemur is a vegetarian, sticking to mostly fruit, nectar, and pollen. And when the appropriate flowers are available, the lemurs feed on nectar by sticking their long noses deep into the plant. The lemur doesn’t harm the flower during its feeding, but actually helps to transport the pollen to other flowers! Unfortunately, lemurs can’t spread or grow pumpkins. That’s why you should swing by Woodland Park Zoo on Saturday, October 27 at 2 p.m. to see them eat this sweet treat!

Small-clawed otters use their adorable little forepaws to snack on crustaceans, mollusks, fish, insects, amphibians, and reptiles. Incomplete webbing between their toes offers a great deal of manual dexterity, meaning they can dig in sand and mud and crush open the shells of their prey. Watch these tiny-but-mighty critters crack open some pumpkins on Saturday, October 27 at 11:30 a.m.

Hippos spend up to 16 hours a day submerged in rivers and lakes to keep their gigantic bodies (which are the equivalent in size to three small cars) cool. At night, hippos travel far and wide to forage for food—consuming 80 pounds of grass at a time. Don’t miss the hungry, hungry hippos of Woodland Park Zoo chomping their pumpkins on Saturday, October 27 and Sunday, October 28 at 10:30 a.m.

Meerkats are tiny little critters (they only weigh about two pounds!) and survive mostly on lizards, birds, bugs, and fruit. But they do enjoy the occasional scorpion—adult meerkats have some immunity to the venom, so the stingers don’t bother them. Even though they’re small, mama meerkats are tough—they’ll cut the tail off a scorpion before feeding it to their young. See the meerkats eat a totally non-poisonous pumpkin on Saturday, October 27 at 11 a.m.