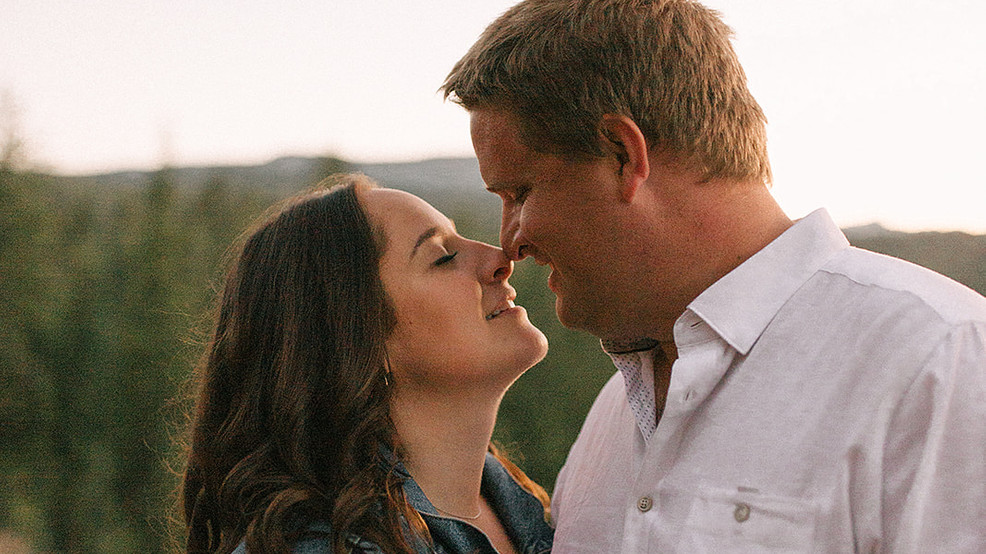 Photographer/blogger/genius Alexandra Celia has devoted her career to documenting love in its purest and most original form — which you'll see in her photos. Now and then, she will share her work with couples: their love story, their commitment, their passion....and of course, their photos. Think of her as our Love Guru. She loves love and is here to share it with the rest of us.

Arielle: Our paths crossed many times while we both were growing up, but somehow, God put us together at the perfect time. Ultimately, a Porterhouse steak at Cowiche Canyon Kitchen (CCK) in Yakima is what brought us together. I was working there as the director of service. Whether it was 11 a.m. or 11 p.m., if Blake Doyle was in the house, he was ordering the 20 oz., 42-day dry-aged, cooked to perfection, medium-rare, porterhouse! Normally, someone ordering the porterhouse would come in dressed in a sport coat, looking to impress by ordering this hunk of meat — but not Blake. He would order this thing while by himself in the bar wearing flip-flops and shorts for lunch. So, obviously, I had to know who he was. Slowly I elbowed my way in one weekend night as the restaurant was packed to the brim, boldly asking, "Can I eat my dinner with you? There is nowhere else to sit" — a bald-faced lie. I could have eaten dinner by myself in the office. Finally, I was in. Weeks or maybe months passed until I decided to Facebook message Blake. So romantic, I know but, I didn't have his number. Blake downloaded Facebook messenger to respond and asked me to join him and his parents in the Ice House Bar at CCK. I pulled up the cameras to spy on him because I am a creep and declined to meet. I was not ready for a whole meet-the-parent's type outing. Later that summer night, we met up at Sports Center after his parents went away, moved along to McGuires, and ended the night with our first kiss under the stars in Blake's backyard as a young puppy, Trigger, looked on. The rest is history.

Blake: Arielle is one of the hardest workers I've ever met. Whether it is going back to school to get her degree or starting a new job, she dives in head first and gives it her all.

Arielle: Blake is an incredibly hard worker; he puts his heart and soul into his work. His consistent, even-keeled attitude is something I look up to tremendously as I can be described as "emotional," to say the least. As he continues to grow in his career and life, proud does not even begin to describe the way I feel about him. The first time we ever hung out where we met up at Sports Center in Yakima, I knew. I walked straight up to him and gave him a big hug — I was hooked. The sweet embrace I felt with our first hug felt like I was finally home. If you have ever had a hug from Blake, which many have not (he is not really the hugging type) you know how spectacular of an embrace he provides. God, I love a Blake hug!

Blake: I knew I really cared for Arielle when we were on a road trip, driving a big loop around the PNW. Being in a car with someone for hours on end really allows you to get to know a person on a different level.

Arielle: In past relationships, trust was always a challenge for me. With Blake, I have never wavered in my trust with him. He is such a solid man, such a safe place for me. He has never given me even the tiniest reason not to trust him. The man is solid.

Blake: Arielle is smart, funny, good looking, caring, serious when she needs to be, really hard-working and loves with all her heart. How can you not be attracted to that?

Arielle: First off, Blake is a STUD have you seen the guy's eyes?! He is also incredibly loyal; I always like to say he is just like our yellow lab, Trigger — loyal as they come. His stature is also incredibly attractive to me, all 6'3" of him. But in all seriousness, aside from his charming good looks, the thing that most attracts me to the man is his personality. It is cheesy to say, but it is like he was made for me. His patience, his calm level head, his generosity and his dad jokes are the cherry on top.

Blake: Everyone runs into difficult situations. Arielle is really good about addressing them quickly, and we generally work our way through them to get to the root of the issue.

Arielle: Blake and I have been fortunate to not have had to face many difficult situations together. I think this is because of the love and trust that is embedded in our relationship. However, as in all relationships, we have had our growing pains. Staying in a small town when I thought I was a big city girl was one of the biggest challenges I faced in our relationship. It took me all of six years to finally claim that I am "from" Yakima. Now, I am proud to call Yakima home. Blake is so patient. I am an over-communicator. Blake listens so well, I communicate really well; it just works for us!

Blake: Arielle is a very caring person. She knows how to perk me up if I've been having a stressful week. Sometimes she will bring me lunch, and just the other week, she went home on her lunch break to bake me one of my favorite cakes, a nice surprise when I came home. She really knows how to turn a frown upside down!

Arielle: Blake leaves for work every morning before I am out of bed, and every day that we have woken up next to each other in the last five years, he has kissed me goodbye. Even if I am dead asleep, I will know if he did not do it! He has maybe missed five days. Coming home to Blakes's face after work also brightens my day and makes me happy; he has such a calming presence.

Blake: We love going up to the mountains to hang out with our dogs. Recently we took up mountain biking together, which we have both loved. We also enjoy cooking together. Being in the kitchen really makes us feel closer to one another.

Arielle: One of the most important rituals we share together is eating dinner at the dinner table more times than not. We cook a meal together, turn the tv off, put on some music and eat. I think my favorite thing we do often is head to the woods. Blake and I like to get away to the woods with our two pups, Hudson and Trigger, any chance we can. Sometimes we will also stop at our favorite brewery/pizza spot, Bron Yr Aur, and grab some beer and a pie.