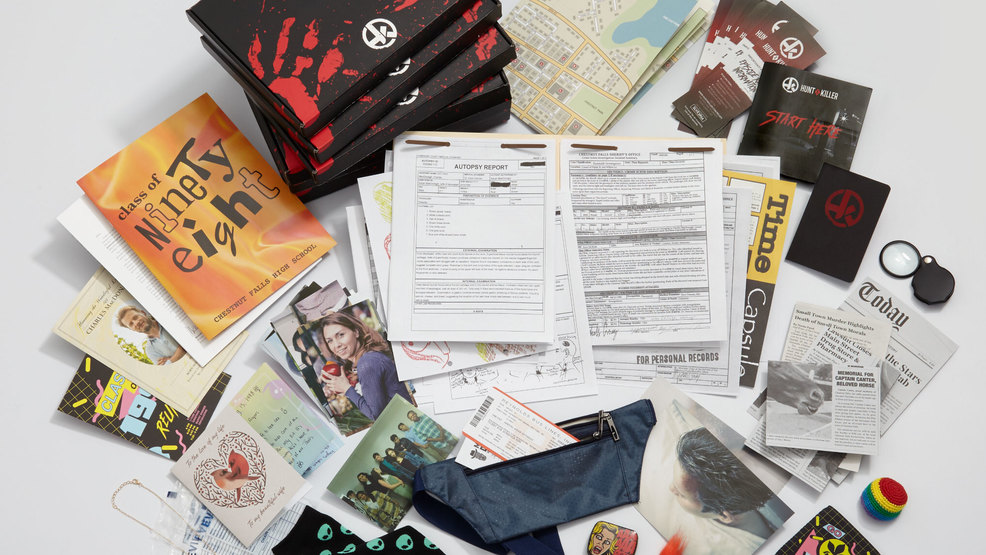 Did You Know? The creator of the 'Hunt a Killer' subscription box lives in Seattle

A thin black box arrives at your doorstep. It has two red handprints smeared along the sides and a mysterious white symbol at its center. You open the box and find a large manila envelope, miscellaneous and seemingly random tokens of someone else’s life and a pamphlet of instructions that opens with an intriguing salutation:

If that doesn’t hook you, then you must exclusively get your kicks from free samples at Costco and home renovation shows on TLC. For the rest of us with morbid curiosities and the confidence that, despite zero professional training, we could solve a murder before any veteran detective we’ve watched on countless murder-mystery shows, this little box is exactly the kind of thing that keeps our minds racing well into the wee hours of a work night.

And with Halloween approaching, what better way to show your loved ones just how much you love them than with a murder to solve?

Hunt a Killer is the fastest-growing thriller subscription service in the world. With 65,000 active subscribers and over 100,000 Facebook members and counting, it brings an interactive and fully immersive mystery to your doorstep every month. If you’ve been dragged to an escape room by a coworker or ex-girlfriend – and then secretly loved solving a puzzle on such a grand scale – then this was made for you.

Founded in 2016 by CEO Ryan Hogan and VP of Creative Derrick Smith, Hunt a Killer is hardly the duo’s first foray into interactive play. In 2011, they created a 5k obstacle challenge called “Run for Your Lives”. The event saw some 12,000 participants at the inaugural race where runners had to navigate the usual logs and mud, but they were also caught in a real-life apocalypse, evading the reaching grasps of actors dressed as very realistic zombies infesting the course.

“Our interest was in exploring experiences that both bring people together and immerse people in a universe that we built," said Hogan, a Baltimore native and recent Seattle transplant. “How do we, just for a split second, break reality for participants and make them believe they’re in a different universe, that they’re actually being chased by zombies?”

The first iteration of Hunt a Killer was a three-hour event held on a 600-acre crime scene wherein participants were tasked with solving a mystery and identifying the serial killer. Like an escape room, murder mystery theater and immersive adventure race wrapped all in one, the concept was a resounding success, but hardly sustainable, leading the business partners to scale back the mystery into an episodic, monthly delivery subscription box that costs patrons between $25 and $30 a month depending on the chosen plan.

This isn’t like any game you played growing up where, if you follow the steps, eventually you’ll reach the end. With Hunt a Killer, you must be cunning and sharp, observant of even the tiniest details and willing to put in the time to dive headlong into the mystery. It's composed of multiple seasons, each a different mystery to solve spanning over many glorious months. It requires not only critical thinking, but oftentimes help from other players.

"There’s a certain amount of gratification that comes from bringing people together from all over the world,” said Hogan. “While we’re missing that physical human interaction, we’re really achieving something special from the online communities and the deliveries. We create these secret Facebook communities so people can get in there and have conversations, not only about what’s going on in their lives, but they’re working through the experience together.”

After serving 15 years in the Navy, most recently as a Surface Warfare Officer, Hogan entered the Naval reserves in 2017 in order to spend more time and energy on growing the company. This required a move from where he was stationed in sunny San Diego to rain-prone Seattle with his wife and four children. It may be a hard sell for some, but Hogan attributes their easy transition to his kids' quick taking to all the Pacific Northwest has to offer.

"The community of Seattle – we live in Queen Anne – there’s this community factor that we never had in San Diego," said Hogan. "My kids walk down the street. They go to their friend’s house and all of them go to Starbucks. It’s very different than the lifestyle they had in the desert of San Diego.”

Headquartered in Baltimore, Hunt a Killer opened its second office in Seattle to house its marketing team after they found a bottomless well of talent in the Emerald City. What started as a temporary base of freelancers operating out of WeWork spaces soon became a full-fledged office that is continuing to expand with no thoughts of moving elsewhere.

"The talent that the local area has is truly incredible," said Hogan. "It would not behoove us to ever leave Seattle. We’re continuing to build the team. We’re here to stay. It’s a pretty incredible place.”

For an entrepreneur who continues to follow-up one successful endeavor with another, Hogan is taking his queue from the ever-growing industry. They've already ventured into the realm of podcasts via Skylark Media, which produced Earth Break, the first podcast to premiere at the Tribeca Film Festival. The success of other such fictional mystery podcasts like Homecoming and Limetown which have been translated onto the small screen starring big names like Julia Roberts and Jessica Biel, respectively, is possibly the best indication of where the future lies, and this hasn't been lost on Hogan and his team as they look down the road.

“The stories don’t have to exist inside of a box," said Hogan. "The story can exist on television. The story can exist in a novel. We’re always looking for creative ways to continue to tell these immersive stories. Podcasts are really just an extension of what we do, and it’s just taking the story lines that we have, putting them in different mediums and proving to the market that it’s not just a box. These are good stories that could be a Netflix show. These could be a full-length feature. That really opens up doors for us.”