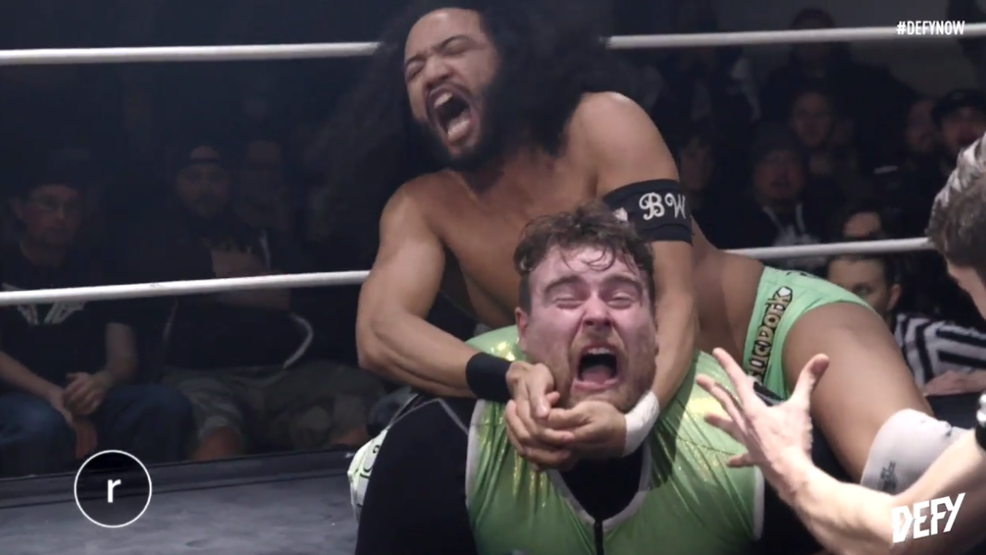 The Secret Life of Randy Hawkins: Cubicle by day, wrestling ring by night

It's just after 8 a.m. and like most people Randy Hawkins is already hard at work. Randy is a team lead at Amica Mutual Insurance's Bellevue office.

"[On] a typical work day I'm answering questions from our customers, I'm helping out co-workers, reviewing files, that sort of thing," said Hawkins. "It's an 8 a.m. - 5 p.m. corporate gig at Amica, but it's great."

Coworkers use words like "calm", "collected" and "mild-mannered" to describe him.

"You never see him one way or the other to any two extremes," said Jillian Gagne, a colleague.

But while Randy Hawkins is a model employee at a desk job, on nights and weekends he becomes Carl Randers - a pro wrestler.

"Of course co-workers talk," said Hawkins. "You know I don't open with [wrestling] in conversation. I don't stand by the water cooler on Monday morning and say 'Hey listen to my weekend!' But people ask and people are curious."

After learning about his double life, his co-workers now make it a point to attend his shows when they can.

"He posts flyers throughout the office," said Gagne. "We go and support him at his different events. When you see him at his show [it's] a whole other side of Randy, so it's definitely surprising."

But this isn't new for Hawkins, nor is it a phase.

"I've been a fan of wrestling my whole life," he said. "So it's just something I've always wanted to do. I'm also big into comic books. So in my mind professional wrestling is the closest people can be to superheroes. We've got our colorful outfits, our different moves - that are like our super powers. It's a good way for people to escape and be entertained at the same time."

Hawkins may have gotten into wrestling because he wanted to be the hero, but he actually ended up becoming a villain. His alter-ego Carl Randers is what wrestling fans call a "heel".

"I'm a bad guy," he laughs. "My job is really to get the 'boos' from the crowd, and really get them behind my opponent."

But he says that his in-ring persona is really just an extension of my own real persona.

"I try to magnify all the things that get on my nerves. That's kind of my character. Just constantly annoyed and angry at the world."

Professional wrestling is a nomadic profession. Hawkins has traveled all over the Northwest pursuing his passion. He's dressed in bar bathrooms and hallways, wrestled in front of a few dozen people - or at big events like the one we followed him to for this piece. It was put on by Defy Wrestling, one of the top independent promotions in the region.

"The crowd at Defy is probably the best crowd in the Pacific Northwest," he said. "So if you're any kind of pro wrestler you'll get some kind of reaction, whether that's positive or negative, and that's what we want. We want those loud reactions."

"The fans are just completely bonkers out there," said Steve Migs, Defy's ring announcer and host. "They're showing a lot of love. The wrestlers feed off that. I've talked to a lot of guys and gals after their matches. They say it's just not like that everywhere."

Many of the athletes hope competing for Defy will help get them noticed by larger promotions like World Wrestling Entertainment, the WWE, but even making it at this level takes serious commitment. Hawkins started training in 2011 under legendary coach Buddy Wayne. He didn't compete in his first match until 2013.

"It was a matter of - if he was going to put his name on someone, he was going to make sure they were over prepared for everything they might come across in pro wrestling," he said.

Wayne passed away last year, but his influence opened doors for Hawkins. He's made a couple of appearances for the WWE during their stops in Seattle and, at a recent Defy event, he notched the biggest win of his career, over independent wrestling superstar Colt Cabana. Of course, the question he gets most often, is the sport he loves...fake?

"It's more real than people think. The bumps, the bruises, the hitting, a lot of that is real and very, very painful," said Hawkins. "So, regardless of whether or not the outcomes are predetermined, the action you see if real. It has real consequences on our bodies and emotions. I think the main thing with wrestling fans today is they know, and they understand and respect that."

On the night we visited, Hawkins and his tag team partner lost. But in the world of wrestling - losing is all relative.

"Tonight was a good night," he said after the match. "We did our job out there, kicked the show off and got the crowd ready for the rest of the night."

Some know him as Randy Hawkins, others Carl Randers, but those two personas are really one in the same. In reality he's one man putting in the work, doing his job in pursuit of a dream.

"I think my goal - professionally or in wrestling I just want to be respected by my peers and go as far as I can within my skill set."