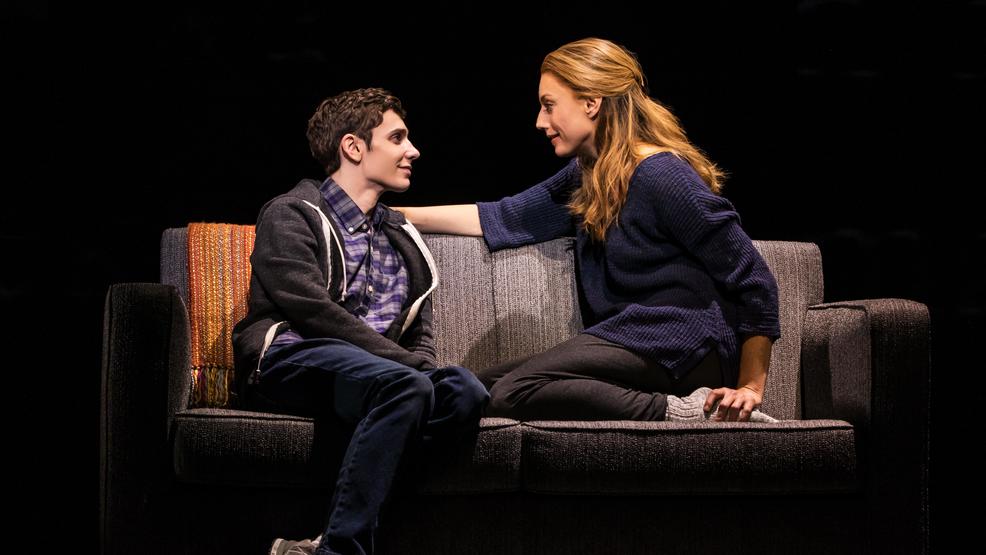 The musical Dear Evan Hansen centers around the titular character Evan Hansen, a high school student who suffers from extreme social anxiety that results in loneliness and isolation. When fellow student Connor disappears, Evan fabricates a lie that unexpectedly brings him closer to Connor’s family and sends him on a journey of self discovery and ultimately purpose. The musical was nominated for a staggering nine Tony awards, which it won 6, including Best Musical, Best Score, Best Actor in a Musical, and Best Featured Actress in a Musical. (Courtesy Paramount Theatre Seattle)
SEE MORE

Talking to the stars of 'Dear Evan Hansen', now playing at The Paramount

The stirring Broadway hit "Dear Evan Hansen" is set in modern times, against the swirl of social media.

"[It's] the story of a boy, Evan Hansen who feels like an outsider," explains Ben Levi Ross, who plays Evan in the touring production of the musical - now at the Paramount Theater. "He doesn't have any friends in his world, and he gets the opportunity basically to get everything he's ever wanted - to feel seen and to feel like he belongs to something - but it comes at a pretty big cost."

Ross plays the title roll, and Jessica Phillips is his Mom.

"Heidi is pretty spunky, and she is doing everything she can do keep a lot of plates spinning," said Phillips. "She's a single mom, and she works full time, and goes to school at night and she raises Evan on her own. She works maybe a little too hard to try to do everything and be everything for Evan. In the process I think she misses out on really connecting with her son."

As Evan navigates the twisted path of teenage friendships, he finds himself in over his head.

"He gets entangled in this lie, with another family at the school, and so it's the story of how that all spirals out of control and how that affects all the relationships in his life," said Ross.

The music is absolutely phenomenal, and exactly what you'd expect from songwriters who also won awards for their work in "La La Land" and "The Greatest Showman."

"I think the beautiful thing about Pasek and and Paul's writing is that is has the perfect balance of: easily accessible for the actor, conversational sort of lyrics and momentum that you really need to keep it active, and also these beautiful moments of elevated language that almost feel like soliloquy-esque."

"They're terrific musicians and so the songs themselves are beautifully constructed," said Phillips. "But they're so simple on the surface that it's easy to get inside of them, and they're contemporary pop so a lot of our audience are teens and tweens. It was the score that I think introduced them to the play."

A big theme in the show is social media, and the hyper-conductivity that we've all grown accustomed to.

"Everyone is at your fingertips with the touch of a button," said Ross. "But I think as a society we're feeling more and more isolated."

There are so many inspirational and powerful messages in this show - for parents, kids and people in general.

"The message I hope that people are taking away from this is to listen more carefully in their lives to the people around them," said Ross.

Dear Evan Hansen is on stage at The Paramount Theatre in Seattle through February 2nd.