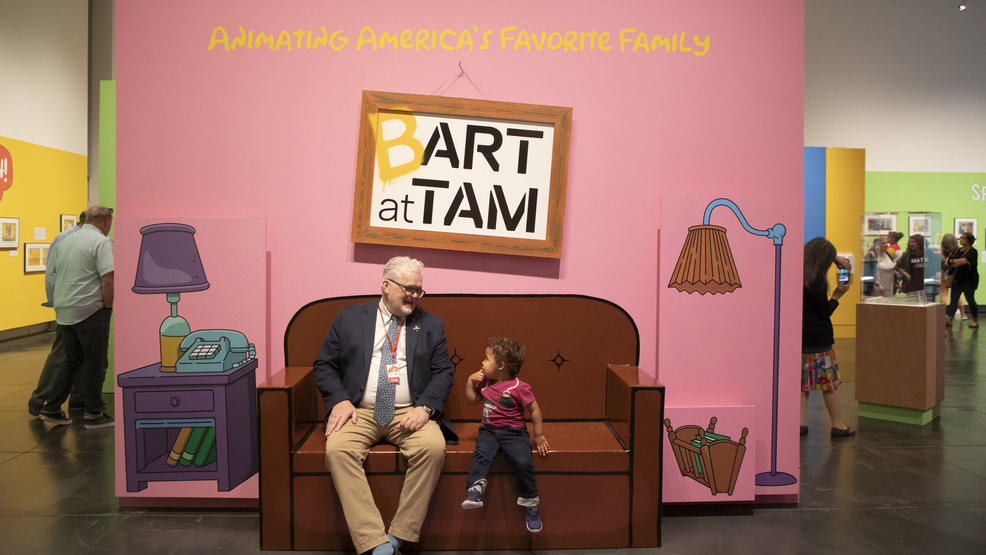 Cowabunga! 'Bart at TAM' exhibit is a celebration of The Simpsons

"TAM is focused on the art and artists of the Pacific Northwest. Matt as you know is a native of Oregon, grew up in Portland and he also went to Evergreen State College [in Olympia]."

This incredible collection of over 100 hand generated animation cels, scripts and more are all on loan from a collector. They span the first 13 seasons of the comedy show.

Some folks may recall, 'The Simpsons' actually started as animated shorts for 'The Tracy Ullman Show'.

Among the items - OG animation cels. "These are actually the original drawings of the characters," explained Bullock. "If you’re a fan of the show you can see changes. Like [for] Marge she doesn’t have those crazy green gloves or the little purse now that they started out with. And in fact, on the drawing, she was originally gonna be called Maggie."

Taking things waaaay back to the beginning, haven't you ever wondered how the characters got their names?

According to Bullock, "The family’s named after his own family. His dad is Homer, his mother’s Margaret, he has a sister Lisa, a sister Maggie... and Bart – he doesn’t have a brother Bart it’s just an anagram of the word BRAT."

Bart get his own section in this exhibit. "He [and Homer] both [have their own section] and it’s party because they’re the most popular characters in the show. He’s really for me, at least sort of, the iconic character that everybody can relate to. Everyone’s had a bratty brother or had someone else they went to school with that acted like Bart, who’s always in trouble but means well."

There's even a chalkboard with "I Will Not Touch the Art" written over and over.

"We wanted to have our own moment to have a chalkboard gag – you know there’s one every time in the opening of every show," said Bullock laughing.

Similar to other sitcoms, The Simpsons has a script, and you can see one of them!

"The collector’s been able to go the table reads where they first go through a script and everybody tries out their jokes and their voice. He lent a couple of them to the show and they’re signed by the actors."

And there's another local tie in. "We had a big debate on which page to open them to and we found one that had a Starbucks joke on it so we had to open it to that."

If you're a fan of the secondary characters on The Simpsons - you won't be disappointed.

"We’ve got images of a number of fan favorites like Ned Flanders the neighbor [the very straight laced neighbor]. Krusty the Clown," she noted. "The man that is near to my heart, Mr. Burns. The kind of evil industrialist of the town."

Now in it's 30th season, the show is still incredibly funny. How do the writers and artists convey so much humor in a few cels?

"Sometimes they just use words like a newspaper headline gag," Bullock said. "They also just set up different sequences so sometimes its an unexpected combination. Sometimes it’s this crazy face someone’s making. Or it’s a sequence of things where you can just see the punchline coming."

So what would Bart Simpson say about this exhibit?

"I have no idea what Bart would say," said Bullock with a grin. "I think for him he would find it funny and not respect it all."