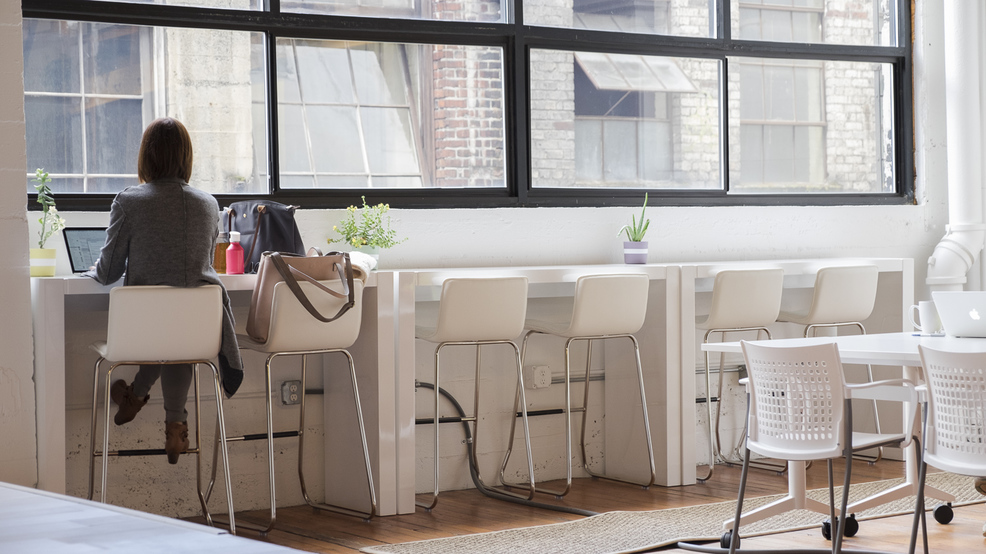 As a freelancer working from home, I know only too well how easy it is to get distracted by the trivia of everyday life. By the time you’ve done a bit of procrasti-dishwasher emptying, thrown in some rage tweeting and then changed and driven to yoga and back, a whole day has gone by with very little to show for it. It can also be a lonely existence, with just the coffee machine, Facebook and the cat for company.

So I was excited to sign up for a day-pass package at The Riveter, a new female-focused co-working and wellness space on Capitol Hill, which opened at the beginning of May. I've been going once a week and it is quite ridiculous how much I get done when I’m there. Something about the combination of a beautiful, inspiring space, and the fact that I’m paying to use it and need to get my money’s worth does wonders for my productivity. There are permanent and floating desks available, bookable conference rooms and telephone cubbies, cozy seating areas for collaborating, free daily yoga classes, a variety of women-focused events and even a meditation room.

Almost more inspiring than the space itself are the two women founders, Amy Nelson and Kim Peltola. Amy and Kim first met in 2014 when they were both new to Seattle and brand-new mothers. Though their backgrounds could not be more different – Amy was a corporate litigator and Kim a social worker-- they immediately bonded over their shared difficulties combining working life and self-care with motherhood.

In 2016 Amy was looking to launch her own business and had been attending classes at co-working spaces around the city. As a woman, none of them felt geared to her needs - too many kegs and ping-pong table - and the germ of a business idea was born. When Kim approached her with the idea of setting up a wellness space for women, they decided to combine resources and focus on setting up a space for women geared to both work and self-care. Last November's election "upended my world," said Amy, a former political fundraiser, but it soon became obvious that the concept behind The Riveter, as a place where women can organize, collaborate, get together, support each other and find a voice, had become even more timely and important.

Between January and March of this year Amy and Kim raised $760,000 in seed money from angel investors, enough to open two locations, the flagship in Seattle and another on the Eastside. In February they signed the lease on the Capitol Hill building which had once been the home of the MTV reality series Real World. Between February and May they converted the space, working out the details of the design and build-out themselves. Amy admits: “I’ve learned to jump and trust that you’ll build what you need on the way down.”

The space is geared towards women entrepreneurs and freelancers across the spectrum, though Amy has noticed that a lot of members are women who are taking their first steps returning to the workforce after motherhood. Though the space is unabashedly female-focused with flowers on the desks and in the bathrooms, soy milk in the fridge, artwork on the walls, and events aimed at supporting and empowering women, men are very welcome, either as part of teams, guests or as solo members in their own right. 120 memberships have been sold already, outpacing all projections, so if you want to claim one of the private workspaces, dedicated desks or floating desks, you’ll need to move quickly. Community memberships, giving access to fitness classes, yoga and events are also available. Word is getting out into the wider community too. Last week they hosted Facebook’s Sheryl Sandberg and at the beginning of the month The Riveter won the Geekwire award for Best Newcomer. But Amy and Kim aren't resting on their laurels. The Eastside Riveter is due to open in the Fall and they are currently raising money to open locations in Portland, North and South California, Colorado and Texas with national aspirations not far behind.

Amy herself, who has two young children and is pregnant with her third, all while birthing her business, certainly embodies the spirit behind The Riveter. “I believe that if you build the right village you can move mountains.”

Get more information about the The Riveter here and sign up here for the one the remaining desks and memberships.