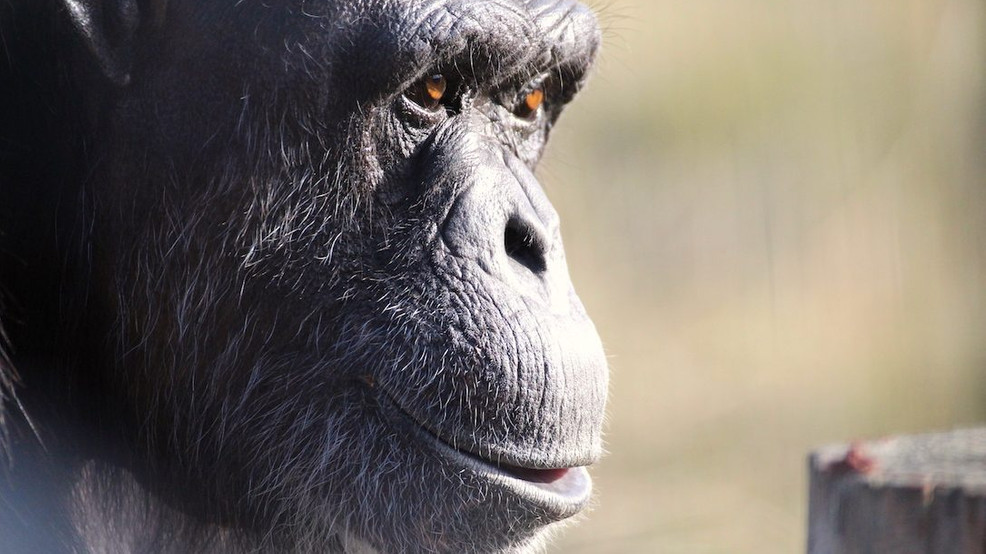 Chimpanzee Northwest: A Sanctuary of Hope, A Home of Love

Their names are Honey B, Burrito, Mave, Annie, Willie B, Foxie, and Jamie. They spent most of their life behind bars, in a research facility with only minimal social interaction - but now, these chimpanzees are getting a second chance at life.

Their home now is on the 90-acre farm of Chimpanzee Sanctuary Northwest (CSNW). Located 90 miles east of Seattle on the outskirts of Cle Elum, CSNW sits nestled among farm and forested land at the foot of the Cascade mountains.

Established in 2003, CSNW became a sanctuary and final home for chimpanzees discarded from the entertainment and biomedical testing industries. And in the late spring of 2008, seven chimpanzees arrived at their new home. In 2019 three more chimpanzees joined the group after a wildlife organization near Los Angeles closed its doors. The farm also houses three rescued cows and a steer who gladly provide grazing services in exchange for an occasional pet on the head and scratch of the ears.

All the chimpanzees at CSNW enjoy a rich social life interacting with each other both in their indoor and outdoor environments. Just recently a new play enclosure was constructed, expanding the chimpanzee’s stimulating world.

Life at the Sanctuary

The chimps keep an active on the farm, with their days comprised of eating, playing, grooming, and eating some more (three full meals a day of fresh vegetables and fruits, nuts and seeds). But like humans, not all the chimpanzees have the same tastes.

“Foxie is probably our pickiest eater when it comes to vegetables,” said Diana Goodrich, co-director at the sanctuary. “Where other chimps like Jamie loves pears, Missy loves fresh tomatoes, Annie’s favorite is a bunch of green onions, Negra likes to snack on peanuts, while Burrito and Jody just love all food.”

Every now and again the chimps get a special meal, like spaghetti or oatmeal. But don't worry, their life isn't comprised of just eating (though that doesn't sound bad to us) - the caretakers at the sanctuary also work hard to create activities for the chimps, to keep them stimulated and engaged. Like, throwing an impromptu party with wrapped or boxed items! Sometimes blankets, boxes, and even paper can turn into imaginative playthings.

Foxie carries dolls around, her favorite a troll doll with a tuft of pink hair.

Honey B shows a wide curiosity in her environment, scooting herself around on wheeled toys while accessorizing with a headband around her waist. She and Mave indulge in many grooming sessions together.

Missy and Annie are known to create elaborate beds which they lie down in, completely satisfied with each other’s company.

Jamie is extremely intelligent and famous for her curiosity as well as her antics. One of her most loved items are a pair of cowboy boots.

Burrito is one of the two males and regularly shows off or “displays”. He has a large personality to go with his show. The other male chimp, Willy B, is a lovable and sociable guy who adores looking at photos and videos whenever a caretaker is willing to bring out their camera.

Can the Public Visit?

While the sanctuary is not open to the public, there are small educational visits held during the summer months for existing donors. This summer proved a little different for many of the classes and volunteer groups sadly had to be canceled due to Covid restrictions. Meanwhile, CSNW is undergoing an expansion! Since 2015 they have quadrupled their owned land, accommodating additional chimpanzees as well as other primates. They began a campaign called “Bring them Home” which will allow up to 20 more chimpanzees to join the existing group. This campaign also includes plans for an educational center as a resource.

Funds for this project have primarily been raised through individual supporters and members with the added help of a $50,000 matching grant from The Chimpanzee Sanctuary Fund. To learn more, become involved, or donate to this project, you can head to their website.

How You Can Help

The sanctuary really appreciates members volunteering - but recognizes there are limited opportunities within the chimp house and enclosures. However, there are occasional volunteer days to help with other projects. Hopefully most of these will resume in the coming year! Check out the volunteer page and form on their website if you are interested in helping out.

Can’t make it to the sanctuary? There is also a wish list located on the website for specific items to donate including toys, blankets, along with specific food items. As always a monetary donation is sincerely appreciated. With a bare-bones crew of eight caretakers and staff, CSNW relies on member's donations for its every day running and operations. If you are looking for that unique gift, one with deep, everlasting meaning - then a membership to CSNW just might be what Santa has in mind for all good girls and boys.