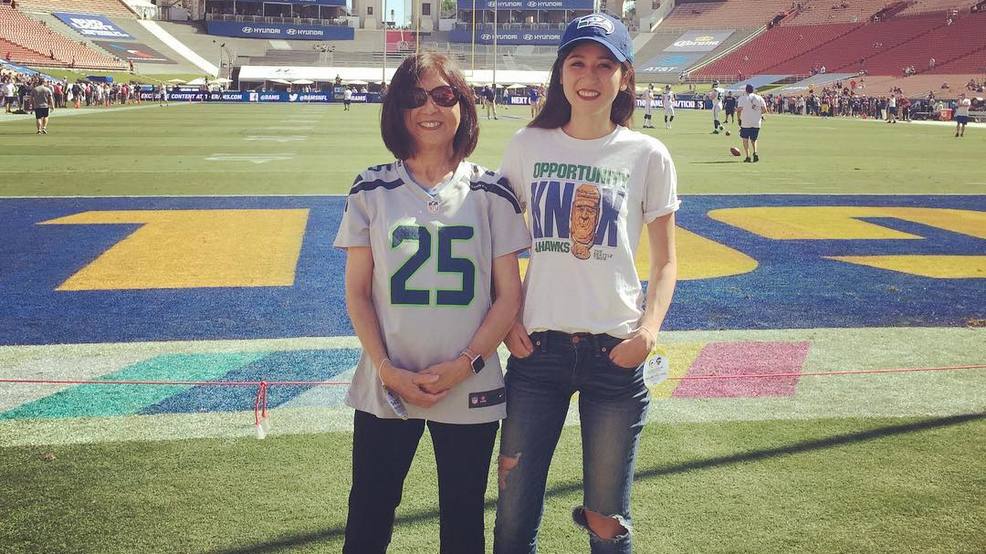 They came out in droves on a sweltering Seattle summer day, packing the bar at the iconic Crocodile hours before showtime. They came to see one person: Mina Kimes.

"I'm a huge Mina Kimes fan," said one audience member. "I read at ton of her articles, she's a great profiler. I'm a Seahawks fan as well. I like that she reps the Hawks."

"She has a great following in the Seahawks community," added another. "She's super fun. I mean, more than anything she really loves the Seahawks."

Kimes is a senior writer, podcast host and commentator for ESPN. She boasts more than 300,000 Twitter followers. Simply put, she's one of the smartest, most entertaining voices covering the NFL, and though she's never lived here, Kimes reps Seattle like few others on the national stage.

"My dad was in the military, he's from Seattle. He grew up here," she explained. "Him being in the military, we lived in a million different places and Seattle was always home base. So growing up, even as I moved to Michigan, California, Arizona - I maintained Seattle. Seattle Mariners, Sonics when I was young, Seahawks, Washington Huskies, everything Seattle for me."

Though her love of Seattle sports was ingrained at an early age, a career in sports wasn't really on her radar.

"I never thought I would work in sports. I honestly didn't see that many people like me and it wasn't something that occurred to me," said Kimes. "I was an investigative reporter with Bloomberg News and that's when ESPN contacted me. I was shocked. I had written a personal essay about rooting for Seattle during the Super Bowl and I mostly tweeted dumb stuff about football. So that's how they knew I was interested in [sports], but it wasn't something I had ever considered or thought I would do before then."

She may not have considered it, but ESPN and Mina Kimes turned out to be the perfect match. From award-winning feature stories, to regular appearances on shows like 'Around the Horn' and 'First Take', Kimes has become one of the brightest stars in sports media. But, she can't hide her Seahawks fandom.

"I have a Super Bowl tattoo on my arm," she said. "At this point it would be pretty hard for me to disavow it or pretend like I don't have the fandom, but I always try to be fair and analytical. I actually think fans tend to be more critical of their teams than anyone else, so I try to be that way."

Her passion for the Hawks is matched by her knowledge of the game. This season, the rival Los Angeles Rams hired Kimes to do color commentary for the team's preseason games, and on her podcast, The Mina Kimes Show featuring Lenny, she talks X's and O's with other football experts. Though she admits, sometimes her co-host steals the show.

"Lenny is my dog. He's the co-host on this podcast. On a serious note, I guess the reason he's the co-host despite possessing undeniable charisma, charm and the 'it' factor, is I was scared to do a podcast by myself. I was like no one is going to subscribe to a podcast hosted by a woman, a football podcast. I was thinking about bringing on human co-hosts and then I thought, you know what, let this be your podcast, and if you're going to have a co-host let it be a dog, just so you're the one talking most of the time. But, somehow, he's overtaken me," she said.

On this night, the sold-out crowd is just further evidence people love Lenny and, of course, people love Kimes too. Ultimately, that's because Mina Kimes has and will continue to be, unabashedly, herself.

"I hope that people who are listening to, or watching, or engaging with a podcast hosted by an Asian woman and a dog come away thinking football is for everyone because that's how I feel...I want it to be inclusive and fun. I take football really seriously but, obviously I don't take myself seriously."