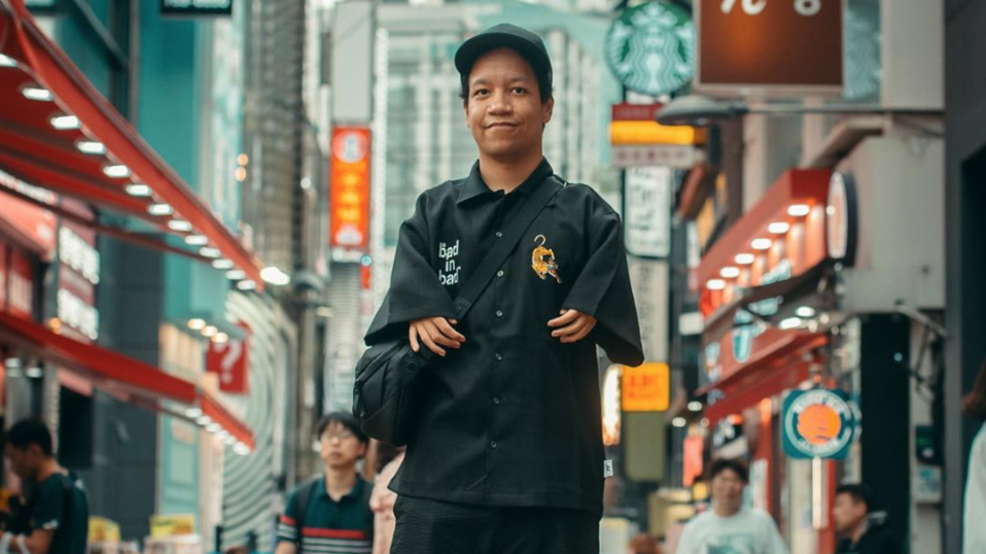 Jordan Nicholson will do what it takes to get THE shot.

It's about more than composing an incredible image. Each click of the camera is infused with joy.

"I feel special getting to shoot with Jordan," said Blimes Brixton. Brixton and Gifted Gab are artists whose photoshoot we're tagging along on. "It’s an honor 'cause he does such great work, and he’s shot so many people I admire."

The hip hop stars are fans of Jordan, and not just because of his work. It's also his personality.

"His talents speaks for himself, but it’s even cooler when you meet somebody who’s so humble and just so nice and loving," said Brixton.

"He’s an open arms kind of guy," agreed Gab. ""I’m sure he has a wall at home of all the photos he’s taken, and we just wanna be on the wall!"

Nicholson has captured images of some of the most celebrated artists of our time, like Lizzo, Pharrell, Kanye and Drake - to name a few.

But you won't see any of his famous photos displayed in his home - it's decorated with something else entirely. One entire wall has been covered with yellow Post-it Notes, each with an artfully written message like 'Keep Going, Keep Faith,' 'Attack The Day' and 'Clock Is Tickin.'

"It’s basically just little notes to self," explained Nicholson. "Whenever I just have something I want to remind myself of, I just write it down."

"My photos and my captions and whatever, is just sort of a reflection of who I am. And I guess - that’s a positive dude!" he smiled.

There's an ease and elegance to his work, which also conveys emotion and energy. From snaps of his family and friends, to travel adventures, to self-portraits.

Nicholson grew up in Seattle.

"My mom is Chinese but born in Malaysia. My dad is African American and he’s from Texas," said Nicholson. "They met in Seattle, [and] like a year later they were married."

He was born with a rare genetic disorder called Thrombocytopenia with Absent Radius Syndrome, or TAR Syndrome.

"I’m basically missing my radius bone, and I think one other," he said. "It’s just sort of a random happening, but this is how I was born. Missing half my arms I guess. But I dunno, it’s part of me, and I like me."

He grew up in a loving family.

"From a very young age my mom taught me [ ...] mind over matter," he said. "Just sort of this idea that your mind is very powerful and your perception of the situation, is the situation."

He never expected life to go easy on him.

He studied art at University of Washington, always doing photography on the side. He worked with a ton of local artists, whose names you may now know...

"[I] worked with Macklemore quite a bit when he was just coming to prominence," recalled Nicholson. "I have photos of him and Ryan Lewis when they were first performing together, for a like a couple hundred people."

Jordan creates and sometimes even skates (!) in his home studio. Everywhere you look you see butterflies, but even today - it's tough to talk about the reason why.

On July 1 of 2012, Nicholson was at a house party with his close friend Sherry Soth.

"Long story short, I was leaving from a party and [...] gun shots broke out," he said. "And my friend Sherry ended up getting hit."

The victim of a random shooting, Sloth, a 21-year old UW grad, was literally in the wrong place at the wrong time.

"She was 5 to 10 inches away from me when we were walking out," said Nicholson. "So I could have just as easily been hit. I think the five people around me that were walking out together did get hit."

He was there as his friend passed away. So, although positive by nature, he struggled to make sense of what happened.

"It just sent me into kind of dark spot."

"There’s this narrative that 'Jordan is the happiest most positive person' and you know, you feel the pressure to keep that face up. That mask up," he said.

He surrounds himself with butterflies to remember his strength and honor his friend. They have a special meaning.

"I feel like I got through that and in a way, I’m trying to live enough life for the two of us," said Nicholson. "Butterflies, they literally liquefy. You almost have to go through [a] very painful process of becoming a new version of yourself."

He decided to stop putting pressure on himself to always seem upbeat.

"I feel like I’ve experienced what inauthenticity feels like, and it can really twist you up," he said. "I think I reached a point where I was like, 'Man I can’t, no matter what I can’t not put out what I'm actually feeling."

That experience is an undercurrent that runs through everything he does.

"I think that before you can share and extend love to the people that are around you, you really have to have love for yourself."

For Nicholson, that means being authentic.

A people person with zillions (yes, zillions) of friends, his story is a series of making connections, like the one he made with music phenom Pharrell Williams.

"Pharrell forever has just been a hero of mine," he said.

The musician designed a collection of clothing for Adidas, and while out shopping one day, Nicholson saw a jacket from the collection and loved it. In a twist of fate, the company put a call out for artists to show them their artwork inspired by the line.

"At that point I was like 'I’m gonna get this jacket, I’m gonna go home, I’m gonna take a photo of myself in it, and then I’m gonna draw doodles over it."

He finished in under four hours, and sent it in. Then, some life-changing news: Nicholson had won the contest.

"It just was one of the craziest 72 hours of my life," he laughed. "I went down [to LA] and I got to hang out with Pharrell."

Their time together had a big impact on him.

"What was one of the most interesting things was just the realization that Pharrell – as amazing as he is, and talented - is a human being too."

It inspired him to think big.

"I think we always think so small-y of ourselves," he said. "And I don’t think we should do that. "

Nicholson looks at the world though his own lens, and what he sees is beautiful.

"Be yourself, love people, follow your dreams. I think those are generally the ideas that I want to live out and express to the world."

A true renaissance man, Nicholson and some of his friends have recently opened Paradice Ave Souf, a clothing store and creative agency located in Seattle.