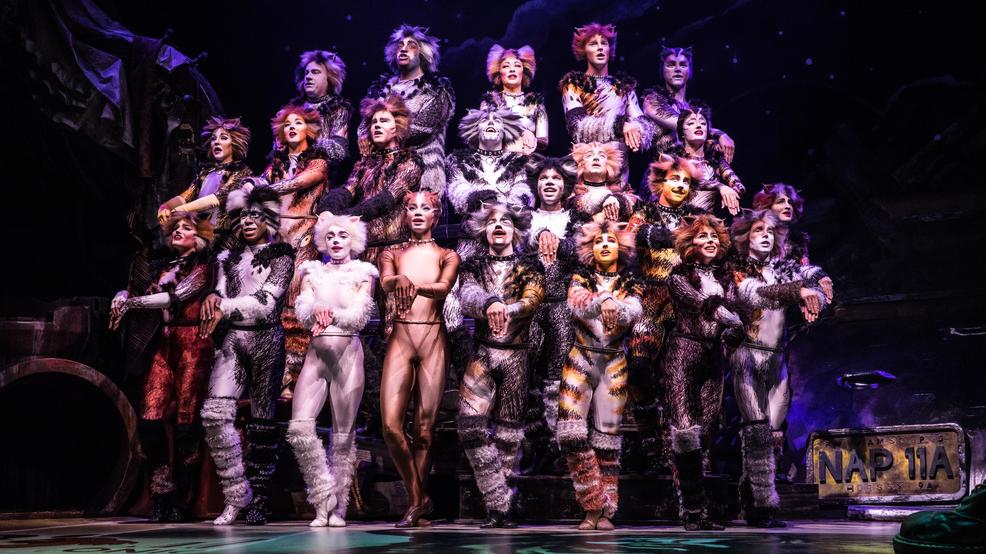 "CATS", the record-breaking musical spectacular by Andrew Lloyd Webber that has captivated audiences in over 30 countries and 15 languages. (Photo: Matthew Murphy)
SEE MORE

"This takes place on the Jellico Ball," said Dan Hoy, who plays Munkustrap. "It is the one night of the year when all of the cats tribe get together and really just celebrates together and the biggest event of the evening is their selecting on of the cats to be a nominee to go to their version of heaven."

As Munkustrap, Hoy has a tail. And he gets to tell the tale about this tribe of cats to the audience.

"He's sort of the leader-in-training, I guess you could say," explained Hoy. "Throughout the show he has a lot to learn. He narrates, he sort of guides you through the night."

"She's kind of what I picture as a silent film movie star," said Fuller. "The glamour, the tragedy - she's truly a beautiful character. She once belonged to this tribe and she went to go seek greener pastures follow her intuition - see what the world is like and tried to come back home but she had already left them. So they're like 'Nope. You cannot come back until you redeem yourself.'"

The actress sings "Memory," one of the most beloved songs in the show.

"It's probably the most pressurized role I've ever encountered," admitted Fuller. "This song 'Memory' at the end of the second act - is something that the audience is waiting for."

With music composed by Andrew Lloyd Webber, the work is actually based on poetry.

"It's based on on T.S. Eliot's 'Book of Practical Cats,'" said Fuller. "Which is a book of poems in which each poem is each character. So each character has their own poem except Grizabella. Grizabella is the exception - she is actually based on a separate poem by T.S. Eliot."

There are so many layers to the spectacle of "CATS" - including the incredible costumes and makeup. Getting into character is quite the process, it takes about two hours.

"If I'm pushed I can do it in like an hour fifteen," said Fuller. "But I like the extra cushion of time, so I always get to the theatre two hours prior to the show."

These stars of "CATS" weren't even born when the musical originally opened in London in 1981. But they say the current show has a modern feel.

"But this version was actually choreographed by Andy Blankenbuehler who you might know from a little known piece called 'Hamilton,'" said Hoy. "So the way that he approached this piece, he sort of infused it with a new 2019 life. So you're seeing it through a new lens while incorporating some of the original choreography."

"We can't talk about "CATS" without talking about the dancing," said Hoy. "The choreography, the dancers are just so impressive. And the way that they can tell stories through movement and through their body is just it's truly remarkable."

After nearly four decades, audiences are still lapping up this musical, and meowing for more.

"People that are seeing it today - whether they saw it you saw it in the 80's, whether you loved this piece before or it's your first time, everyone sort of gets to relive this memory for the first time," said Hoy.