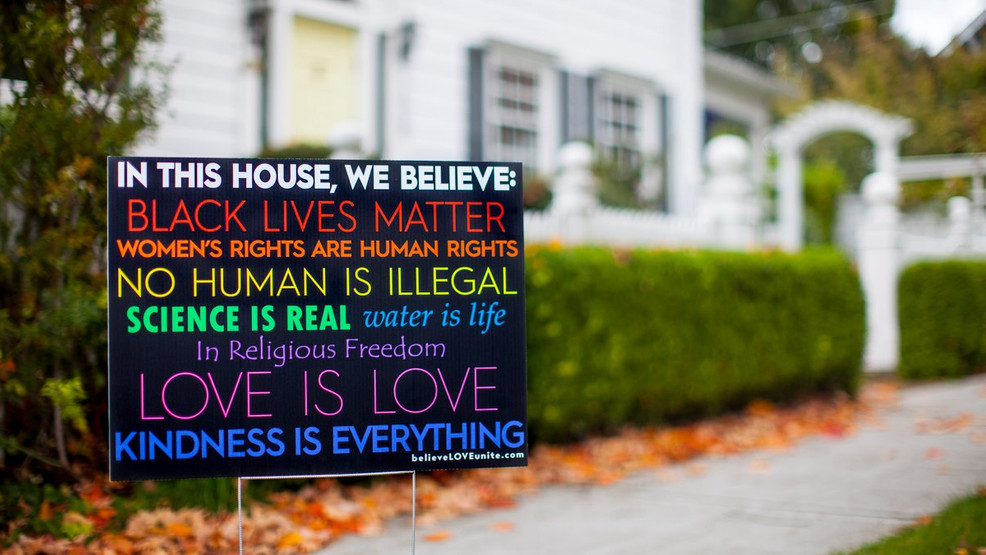 Rather than waking up feeling hopeful on New Year's Day 2017, Tara Clark instead felt heavy and disenchanted by the barrage of news stories filled with uncertainty, fear and hatred. The former Peace Corps volunteer, mother of two boys and self-employed photographer could not allow herself to give in to the hate and fear and instead decided to foster connection to humanity and change.

She decided to create and print a lawn sign for her home that would express everything she believed and send a message of hope to those who read the sign as they passed her home. After visiting an art store, the clerk suggested she look to Google for inspiration and came across a doormat that expressed her sentiment.

Intending to print just one lawn sign for herself, at the price of $80 a pop, she asked the printer at what number she would reach the price break — 200 signs. Trusting her instinct, she went for it. She knew that she could sell the 199 extra signs by reaching out to every friend, Facebook connection and contact she knew.

You've seen them — the "Believe, Love, Unite" signs. They're in your neighborhood, in shop windows and on shirts. You see them when you travel out of state, even in places you wouldn't expect.

The preamble starts like this: "In this house, we believe..."

"The reason I wanted a sign was because of all the negativity, fear and hatred," said Clark. "It wasn't just coming from one side, but from all sides. Nobody trusted one another. I believe that people are amazing, and we're just not seeing each other."

Clark's two sons weren't thrilled with their mom's forthright signs, especially when she duct-taped one to the family car. The same car she used to pick them up and drop them off at school. Both worried that they'd be teased or someone would throw rocks at the house. As the family piled into the car before departing for Canada, her husband plucked the lawn sign from the yard, worried about what might happen while they were away.

Clark's response? "We don't get to step in and step out. We need to stay true to what we believe," and she put the sign back into the ground.

Five days after making that order, her family left on a short trip to Canada, but not before she dropped off the first 20 pre-ordered signs.

On the drive to Canada, she received texts and calls from people she didn't know, from people asking about the signs. That same year, the Women's March coincided with Martin Luther King, Jr. Day and people wanted signs for the event. She sold 100 signs within the first week. While hitting the slopes in Canada, she called her printer and asked how many he could print by the Women's March, just 10 days away. She added a few thousand more signs to her original order.

Back home, days before the march, she drove around to various parks in Seattle, setting up pop shops from the back of her SUV, attracting attention in her disco ball helmet. In support of freedom of speech and public radio, reporting true information and telling community stories, Clark decided to donate the proceeds from the sale of the first 200 signs to KUOW.

The next 200 sales went to the Ben and Catherine Ivy Center for Advanced Brain Tumor Treatment. Every 200 sales, Clark would donate the proceeds to local organizations that supported the messages on the signs, including Planned Parenthood, Village of Hope, Water First International, It Gets Better Project and more.

During the first year, she donated at least $5,000 to each organization.

"I knew that I had to try, even though it was a total leap of faith," Clark said.

By the end of that first month, the feelings of despair morphed into hope, fueled by the community she has built through the sale of something as simple as a lawn sign. Seeing them around town, and knowing that homes across the country displayed them in their yards reminded her how deeply connected and powerful we are when we work together.

Clark hasn't taken a dime from the sales of the signs — much to her husband's chagrin at times. What keeps her motivated to continue making and selling them three years later are the people and experiences that she wouldn't otherwise meet or have outside of her usual routine.

When her husband expressed concern over using their money to create and sell signs that wouldn't generate a profit, she said, "No, we're using our privilege."

She promised him that she would never lose their money she invests in the business, but she refuses to let him redirect her attention.

"I think this happens in a lot of marriages, especially in white couples," said Clark. "If we're not making money, then we need to be supporting the family. White women have the opportunity to create change."

And besides, Clark is continuing her familial duties. She works as a full-time photographer and works on the signs before her boys wake up and after they go to bed. After George Floyd's murder, she was drowning in orders. A typical week drew 5-10 sales. After his death, that number soared to 30-40 per day.

"For me, this isn't political, it's about our shared humanity," she said. "We have to find ways to work together. "

As of Sept. 10, Clark has donated $75,000 and counting to mostly Washington-based charities that fit the theme of the messages on her signs. There are only two states — Delaware and South Dakota — where she has not yet delivered a sign but anticipates that she'll complete the country soon enough.

And in case you were wondering, neither Clark's home nor the family car has been vandalized for boasting a "Believe, Love, Unite" sign.