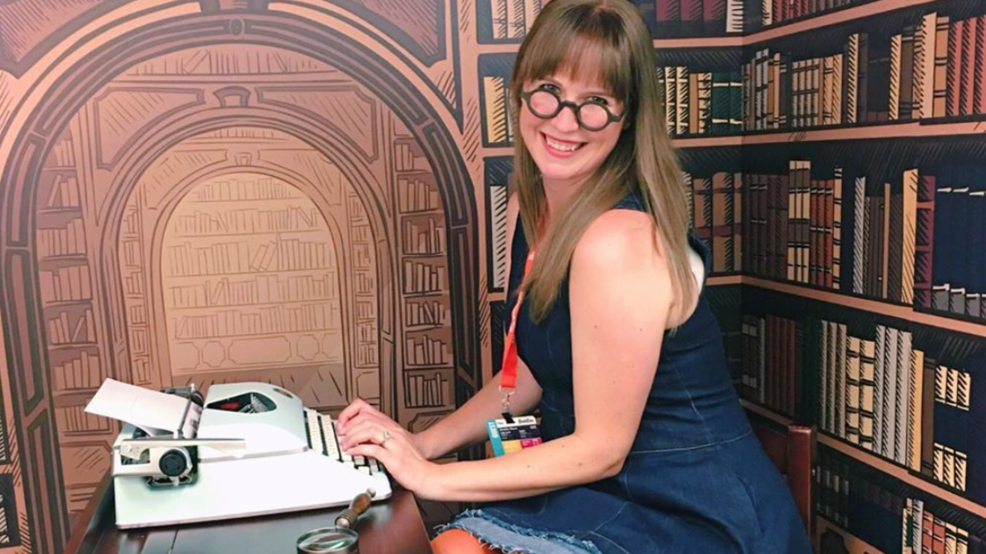 She's the number one New York Times bestselling author, whose YA books are literally 'out of this world'! From a cyborg Cinderella, to human beings with amazing abilities, Tacoma native Marissa Meyer's stories are a mesmerizing mash up of sci-fi, romance and some serious action. (Instagram: @marissameyerauthor)
SEE MORE

She's the number one New York Times bestselling author, whose YA books are literally 'out of this world'! From a cyborg Cinderella, to human beings with amazing abilities, Marissa Meyer's stories are a mesmerizing mash up of sci-fi, romance and some serious action.

While some of her books are set in outer space, she writes them from her home base/writing studio in Tacoma. She gave us a little tour.

"It was built by my husband who is a very talented carpenter," explained Meyer. "Of course I have my floor to ceiling bookshelves which is every author’s dream."

Then there's the whiteboard - it looks like an organizing junkie's dream come true. "Well, this is where the magic starts," she grinned.

'The magic' is the process that she uses to create compelling characters with their own unique strengths, weaknesses and deliciously complicated love lives.

"For me, whenever I’m starting a new project, I write up all my scene and chapter ideas on these little index cards and shuffle them around [on the whiteboard] and try to figure out what are my main points, what’s the mid-point and eventually it sort of starts to feel like a book, we hope."

She's been in love with books from the beginning. As a matter of fact, one of her very first words was 'story.'

According to the author, "I don’t remember never not writing. My mom likes to tell the story about how I would come up with these daydreams and I would tell them to her and make her write them down for me so I could turn them into little books."

Then as a teen, Marissa became inspired to create stories centered around a specific character - the Japanese anime character 'Sailor Moon.'

"It’s this show about these amazing teenage girls who all get super powers and just become super heroes and they run around fighting monsters and saving the world." She continued, " And there is this epic romance. I was so in love with this show and the manga and so I wrote fan fiction for sailor moon for years and years and years."

That experience sparked something for her. "After college, at some point I started to think, you know, “I’d love to do this as a job.” I love to write. It’d be really cool if I could get paid for it, so I started working on original novels."

Then - 'Cinder,' the story that would become her big break. And of course, it had a sort of supernatural start.

"It actually came to me in a dream. I had a dream that I could see Cinderella in her beautiful ball gown running away from the castle, but rather than a glass slipper falling off, her whole foot fell off," she laughed.

"And I kind of snapped awake in the middle of the night and my first thought was that she was a cyborg. And, that her foot was this robotic foot that wasn’t properly attached... and my imagination just kind of started to run wild!"

After writing the manuscript and sending it out, it only took two months for Meyer to land an agent.

Her debut novel, Cinder, was the first in the Lunar Chronicles (books in this series also include 'Scarlet', 'Cress' and Winter) - all putting a fresh twist on classic fairytale characters.

Each book has a heroine, but that doesn't mean that they have it all together.

"Nobody in real life is perfect, so I try not to make any characters perfect either. They all have fears and weaknesses - and they all struggle with different things in their lives. You want your characters to feel like they are real people".

After the smashing success of those books, Meyer wrote some novellas and The Renegades trilogy.

The first book is titled 'Renegades' and it sets up the series. The author gave us the scoop.

"The idea is that it’s set in a world in which people have super powers and they are called prodigies. And there is a girl, Nova, who has been raised by super villains and she is determined to take down this very powerful group called the renegades. But then she meets a boy who is a renegade and the two of them start to develop feelings for each other, not realizing that their alter egos are becoming arch enemies."

It sounds like some pretty heavy stuff for her teenage target audience.

"That’s part of the reason I love writing for this age group," Meyer noted. "They feel so passionately about the world and the characters and what’s going to happen. They just care so deeply and you don’t usually get that in an older audience."

The Renegades Trilogy continued with Arch- Enemies and her newest book, Supernova.

It's not just about writing, these days, Marissa also spends a lot of time reading to her adorable twins Sloane and Delaney.

The busy author is enjoying parenthood. "I think cuddles - they make me happier than about anything else in this life."

The next chapter of Marissa Meyer's story is still being written. But she has some advice for young people.

"You know there are so many ways to live our dreams and to be able to spread our passions to the world, but if you love something, than find a way to do it, find a way to make that part of your life."