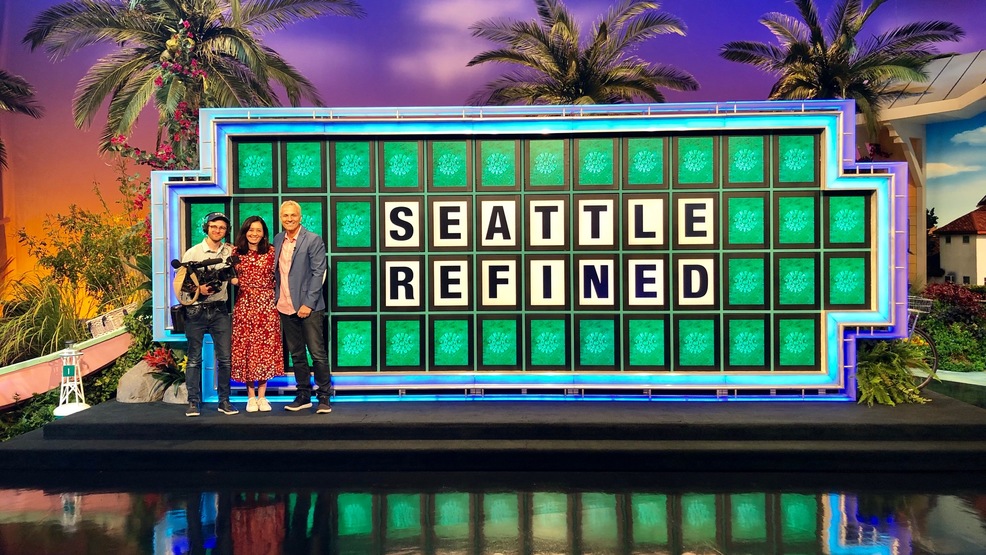 Refined got an all-access pass to go behind the scenes at 'America's Show' - the iconic game show Wheel of Fortune! One highlight: An exclusive interview with stars Pat Sajak and Vanna White. (Courtesy: Seattle Refined)
SEE MORE

Behind the Scenes with Pat & Vanna from 'Wheel of Fortune!'

Every evening we welcome them into our living rooms, and our lives. For nearly four decades, Pat Sajak and Vanna White have been the faces of America's game, "Wheel of Fortune."

For many of us, they feel like friends. So when Wheel invited Refined for another visit to Sony Pictures Studios in Burbank, CA - they did not have to Spell It Out. We said Y-E-S!

The duo has been working together for 37 years.

"Yeah, when we first started I used to push her in the stroller," said Pat, laughing.

Jokes aside, they have it down to a science.

"We do six shows and people say 'Oh how grueling what a long day!'" he said. "We start at noon, and we’re done by 6 o’clock. We’ve done six shows - including a dinner break - it’s a pretty efficient model."

They do 12 show in two days, and then have the next two weeks off. Not bad, huh?

"I love coming to work, I really do," said Vanna. "We do it about four days a month, and it’s always fun to come to work to see everybody. We’ve all been together for so long, and it’s like seeing old family again, you know? We're just one big happy family."

"We do have a couple of uncles we don't care for," Pat quips with a smile.

They've seen their share of contestants come through the doors, so we had to ask. What do they think of PNWers?

"Thank you. We’re gonna meet, I’m gonna meet 18 new people and they’re all gonna be nice people," he said. "They root for each other they care about each other - but yeah, Seattle is no different from anywhere else in that they’re welcoming and friendly and enthusiastic when they play. We always look forward to their visits here."

Not only did we get one on one with Pat and Vanna, we also got to check out the iconic "Wheel of Fortune" set. Ready for some quick facts to dazzle your friends with at the next trivia night?

Every week the theme changes on "Wheel of Fortune", and this week is extra special for Seattle - it's Great Northwest Week.

"It’s always wonderful to visit Seattle," said Vanna. "And I have to tell you, you talk about the rain, every time I go to Seattle the sun shines."

"And I want to mention, you know I was on top of the Space Needle," said Vanna. "Did you see that picture? At the very very top. I went up a hatch, I go up - it’s literally 6 feet in diameter and it just has a little railing. Very scary! I’m holding onto the edge and the helicopters flying above and they’re saying 'Action'! 'From Seattle it’s Wheel of Fortune!'"

But even when they're "just" on their set, the camaraderie between the two is palpable.

"We’re like brother and sister," said Vanna. "37 years and we’ve only had one argument."

And what was that one argument about, you ask? Hot dogs.

"She puts ketchup on her hot dogs," said Pat.

That's it? Not too shabby if you ask us! But when they're not filming, life is "excruciatingly normal", as Pat puts it.

"Whatever that means!" he said. "I’m very lucky to live in a, to work in a business that they treat you well and they pick you up in limos, fly you around and all that stuff. I’m just lucky enough to be doing it."

"When I was 5 years old my grandma taught me how to crochet," she said. "And I put it down until I started 'Wheel of Fortune' 37 years ago. I just love it - it’s therapy, it’s fun, I’m make things – I made him an afghan."

"I have my own line of yarn that came out of it," said Vanna. "I donate proceeds to St. Judes, so I’m very happy about that."

"I went [there] and I saw how they don’t turn anyone away," she said. "I have two healthy kids, which I’m so grateful for - but there’s a lot of people out there who need help, and St. Jude helps those people."

This show also really knows how to have fun - Pat is a known prankster. He told us about one particular prank on an April Fools Day several years ago.

"We had a wigmaker come in, very talented one who does all the 'Pirates of the Caribbean' movies and made a wig of my hair," he said. "And then we had a bald cap expert put a bald cap on me, and then we put the wig on me that still looked like my hair."

He then "confessed" to Vanna on air that he had been keeping a secret all these years.

"I made this confession and she pulled it off - and she really reacted because it looked real and she screamed!" said Pat. "Very funny but to this day people think it was not a gag."

Both on the show and in real life, Pat and Vanna are still having a blast.

"I’m driving with Vanna a couple weeks ago, I picked her up and I’m driving home and we pass one of these tour busses through Beverly Hills," said Pat. "So Vanna rolls down her window because she’s Vanna, and says 'Hey do you know where Vanna White is?' Everybody laughs – Oh Vanna! Taking pictures and said 'Look who’s driving - it’s Pat!' I said 'Oh thank you – they’re all getting my license plate now.'"

Finally, the big question - where is the show going?

"We’re not gonna be here forever," said Pat. "I don’t plan to do this when I’m in my late 100s. So at some point in the not-to-distant future we’ll head off and someone else will come and I’m sure it will be fine. For them too, so you might keep that in mind."