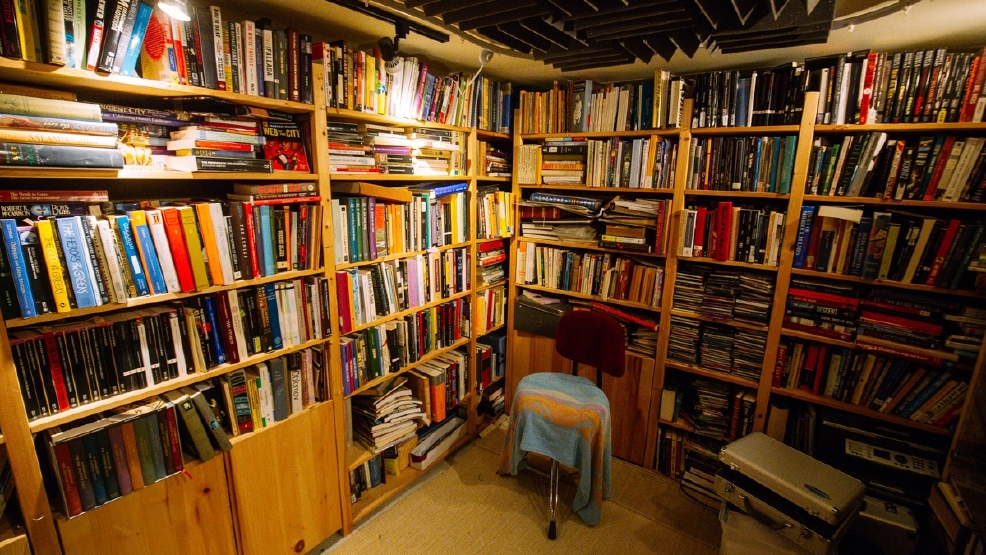 Behind the Bookshelf: At home with a librarian

Welcome to Seattle Refined's series on the at-home must-haves of our city's movers and shakers. We'll pick the brains of the 206's best and brightest about what they use to do their jobs at home - after all, everybody has to leave work eventually.

This week's installment: David Wright of the Seattle Public Library.

First of all, what's your favorite book of all time?
Oh dear. That is sort of like asking the old woman who lived in a shoe to pick her favorite child. With so many books - and so many reading moods - I'm afraid I can't choose just one, but among my favorite books are "The Idiot," by Fyodor Dostoyevsky, "The Name of the Rose" by Umberto Eco, "The Waves" by Virginia Woolf, "Haiku" by R.H. Blythe, and the stories of Shirley Jackson. Also pretty much anything by Graham Greene or Joseph Conrad.

What books do you most recommend to your friends?
It depends. At the library - both in person and online through our popular Your Next Five Books service - we try to gear reading suggestions to the specific taste and mood of the reader we're talking with. Still, there are certain books that come up a lot. There's this perfect little novel called "Montana, 1948" by Larry Watson that appeals to a lot of readers, and is in many ways a better companion for "To Kill a Mockingbird" than the new Harper Lee release. "Time and Again", that sweet time travel classic by Jack Finney, or Peter S. Beagle's "A Fine and Private Place," a charming story about the man who lives in the graveyard. Elaine Dundy's fish-out-of-water romantic comedy "The Dud Avocado;" Dodie Smith's "I Capture the Castle." Stewart O'Nan's "Last Night at the Lobster," a pitch perfect glimpse at American life today, or Michael Ondaatje's "The Cat's Table," with it wide-eyed sense of adventure, or John Vaillant's "The Golden Spruce," a gripping Jon Krakauer-style true thriller packed with Northwest history. But really, it very much depends on the interest and inclinations of the reader I'm talking to, which might lead us to Murray Morgan's Skid Road, or Katherine Dunn's "Geek Love," or Nathan McCall's "Makes Me Wanna Holler," or almost any other place in the limitless universe of books.

What's the book in your library that you've loaned out the most?
I have a bad record of getting books back from people, so honestly I don't lend so much as just give away. The thing I've loaned out more than anything is a book once-removed, which is the Royal Shakespeare Company's classic nine hour staging of "Nicholas Nickleby" on DVD. Watching this has become a holiday tradition for us, and is the perfect introduction to the joy and pathos of Charles Dickens. Makes me cry every time.

Do you have multiple copies of anything? Why?
I keep some extra copies of James Agee's "Let Us Now Praise Famous Men" on hand to give to readers whom I think will like this moving and extraordinary account of tenant farmers during the great depression. Likewise Laurence Boldt's excellent "Zen and the Art of Making a Living," which is a great graduation gift, and Marcus Aurelius' "Meditations," which I love to give to people who are feeling tossed and turned. I do have four different translations of the Essays of Michel de Montaigne, none of which I've read in their entirety, though I'm partial to the earliest by John Florio, which they think Shakespeare probably read.

What's the oldest book you own? The strangest? The most rare? Your favorite?
While I love older titles, I don't really collect old or rare books, so I think the oldest stuff would be some 19th century editions of various classics. I have this great old volume by a Scottish writer named John Hill Burton called "The Book Hunter "which I like for obvious reasons, and I have lots of great old pulp paperbacks.

Perhaps the oddest book I have is something called "Codex Seraphinianus," which is this amazing huge illustrated volume chronicling an imaginary world in a non-existent language. I'm also very fond of is Judith Schalansky's "Atlas of Remote Islands."

I own a number of books which are dear to me as objects, such as a handful of paperback copies of Herman Hesse's novels - including a copy of "Steppenwolf" clearly stolen from a public library - that were among my grandfather's few possessions when he died, and a wonderfully dogeared collection of old Walter Kelly Pogo comics that belonged to my grandmother. I also still have copies of some books that were read aloud to me as a child, such as Howard Pease's "The Jinx Ship," and a Junior Readers' edition of "Robinson Crusoe" with beautiful illustrations by Lynd Ward. These books are more than the sum of their words.

When do you read at home?
When falling asleep, when waking up, and at times in between.

Where do you read at home?
We have a few prime spots, including a chaise lounge in our secluded study that gets good natural light in the afternoon, and a great bathtub for reading on cold dark nights, though truly a cool bath and a book have begun to look tempting this hot summer. (I'd be remiss if I didn't add: no library books in the bath, please!) Mostly in bed: that's where the bulk of our reading happens, both silently and aloud.

Do you read away for home? Do you have a book for the bus, a book for killing time between meetings, etc.?
I'm one of those people who feel a bit lost if I don't have a book with me at all times - or a full bookcase in the case of an eReader. I am pretty much always either reading or listening to audiobooks during my light rail commute. I also really love taking a long slow walk with a book; something about reading and walking feels perfectly in sync for me. The walking clears my mind and makes me less fidgety, and I have less of that Seattle guilt over staying inside on a nice day. Thanks to eReaders, you can even stroll with a book in light rain - again not something I'd recommend with a library book. (Can you tell that water damage is the bane of the Seattle librarian's existence?)

What's your favorite genre to read? Your favorite author?
I'm a big fan of espionage - Len Deighton, John Le Carre, Olen Steinhauer - and also really enjoy crime fiction, especially noir. I have a weakness for John D. MacDonald's Travis McGee books. I also very much enjoy suspenseful short stories, which I have the pleasure to share with listeners a couple of Mondays each month in my lunch story time for grown ups at the Central Library, called Thrilling Tales. Roald Dahl, Patricia Highsmith, Ray Bradbury, Shirley Jackson and Ruth Rendell are particular favorites there.

Let's talk organization. How do you keep track of your books?
Ha! Badly. Most librarians are very well organized, and take a special joy in keeping everything its place. I'm the other kind of librarian, and my home shelving system is pretty whimsical and frankly disorganized. In my basement library, books are two-deep on the shelves and mostly wedged in any which way in a subjective hodgepodge. Some titles are grouped on a theme, while others are arranged by chance, by size and even by color. Public libraries have to have an internally consistent organization, but personal libraries can follow whatever suits their creator's fancy, and I feel at home in a somewhat chaotic forest of books. I like those kinds of bookstores too - great tumbledown used bookstores that send you digging through piles in search of hidden treasure. I do keep my library books in one or two spots, in an effort to reduce the amount of fines I pay each month, and would recommend the same strategy to others.

When did you start this organization system?
It has evolved over time, geologically, in fits and starts. There are bunches of books that correspond with passing interests - in ancient Greece, in paleoanthropology, in tarot, in street fiction - all mixed in with curious odds and ends.

What are you using to store them? Is there a bookcase you like?
Probably my favorite home improvement we've done here at the house was having built-in bookcases put in on either side of the living room fireplace, and another custom-built, very tall bookcase put into the study. These were both made by Ballard Bookcase, and they are the most beautiful and sturdiest bookcases I've ever owned: they're packed, and there's no sag in the middle of the shelf at all. Of course I have a nightstand that generally overflows with books, and we have one of those neat "disappearing" bookcases in a bit of hallway space. The bulk of books are crammed into a basement book room, equipped with a dehumidifier to keep the dreaded Northwest damp at bay. The former owner had put it in as a music room, but its fate as a literary man-cave was pretty much sealed the minute I saw it.

Have you ever made choices about where you live based on whether it can house your library?
I don't think this was a conscious factor in our choosing our current house, though maybe the books were exerting subtle tectonic pressure on us. I will say this: having a lot of books certainly reinforces any inertia I may already have about moving house again anytime soon. There will have to be a lot of bookish soul searching, downsizing and donating before the next move happens. Either that, or a very bookish estate sale. I really need to get a Little Free Library set up so I can get books flowing out more than in.

What's your favorite library from pop culture? (Lots of people are fixated on Beauty and the Beast or Rory Gilmore's makeshift organization system -- do you have a favorite?)
Call me old school, but I really love the town library in "Something Wicked This Way Comes," both the Ray Bradbury book and the movie based on it. Bradbury was one of the great library lovers of all time, and his descriptions of libraries are full of dark, delicious mystery of nighttime stacks, bristling with untold tales and potent magic - the real magic lies sleeping within the pages, and peering darkly from the shadowy shelves. Also the library in Umberto Eco's "The Name of the Rose," the thrill of forbidden truths lurking. And of course I love the Unseen University Library from Terry Pratchett's Discworld books, where rules such as "Silence" and "Do Not Meddle With the Nature of Causality" are enforced by an orangutan librarian.