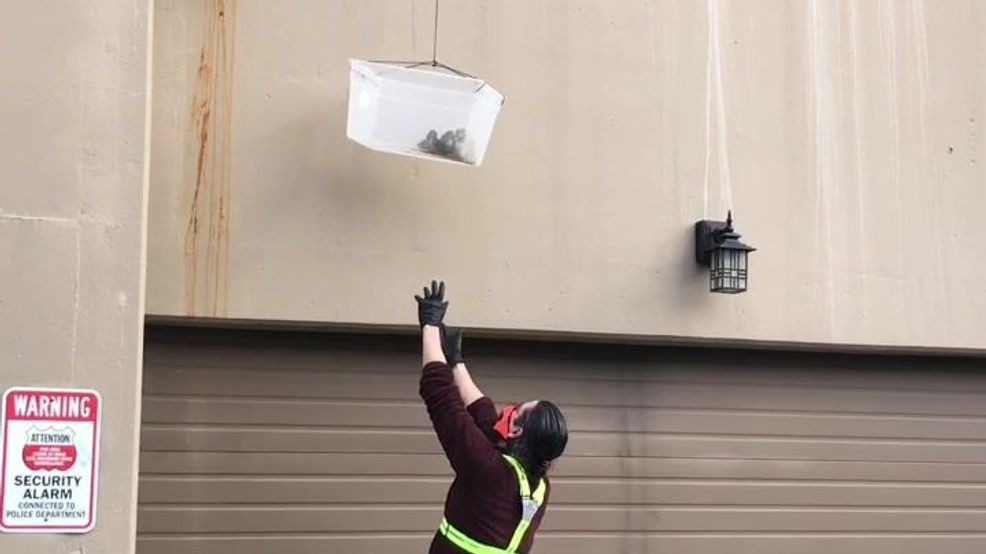 Ducklings get safely to water, thanks to Ballard residents' yearly rescue mission

Each April and June for the past couple of years, an apartment complex in Ballard has gotten a visitor. A visitor with some serious baggage. She's a female mallard, whose been coming to this specific apartment building since 2017 to nest, and lay her eggs in a bush on the second floor.

"I think she knows she can come here and be safe," said resident Nathaniel Peters. "I like to think we have an understanding."

Peters and his neighbors call this time of year when their visitor returns, Ballard Mallard Duckling Drop Day. While they can't be positive, he believe it's the same duck each year - having found a safe place for her young ones to enter the world. A solid wall keeps the newborn ducklings from jumping to the street below.

But it's this same wall that causes a problem. Even if they could get over the wall, it's a half-mile trek to the waterfront, with numerous obstacles (cars, animals, humans) in the way.

Enter Peters and his neighbors. Each year, tenants have 'rescued' and escorted the ducklings from their apartment complex safely to the waterfront. They did it for the sixth time on Sunday (April 19, 2020).

Peters, his partner Vaani and neighbor Andrew, collected a record 15 ducklings Sunday. They kept the rescue team to just the three of them this year because of COVID-19. Like in the past, the ducklings were lowered to the street by a homemade "elevator," and then the rescue team helped guide them to the waterfront.

Peters said it was a breeze this year because there were fewer cars and foot traffic, presumably because of more people staying home and social distancing. This is the first time he has posted publicly about the rescue on social media, and the response has been overwhelming. His Facebook post has more than 3,300 likes and 4,000 shares as of Thursday, April 23.

"This experience is truly exhilarating, exceptionally grounding, and always one of the high points of our year," Peters said. "It is a small but important way that we have chosen to give back to our community, and we believe that actions like this are so important right now."

And if the pattern holds, the mallard will be back in June to do it all over again.

"I would be very surprised is she doesn't come back," Peters said. "This is her nesting spot...her home."